some grand unification theories, such as the Georgi–Glashow model, require it. According to such theories, the proton has a half-life of about 1031 to 1036 years and decays into a positron and a neutral pion that itself immediately decays into 2 gamma ray photons: $$ p^+ \to e^+ + \pi^0 $$ $$ \pi^0 \to 2 \gamma$$ Since a positron is an antilepton this decay preserves B-L number, which is conserved in most GUTs.

Can you explain why a proton is expected to decay into a positron and a pion? a neutral pion has mass 135 MeV, so we need half a dozen of them to make up the proton mass, else there should be a positron, a pion and gamma rays of 1700 GeV energy. What am I missing?

Also, a proton has 3 quarks, a pion only 2, what should happen to the missing quark? Is that hypothesis viable?

The rest of the energy goes into kinetic energy of the decay products..

Proton decay , which violates baryon number conservation, appears in extensions of the standard model, which propose the definite structures and within such models the probabilities and decay modes are not random, they are constrained by the symmetries.

Experiments put limits the the theoretical models have to obey, 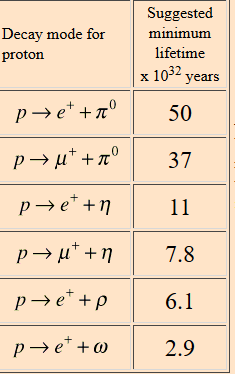 As of this point, it seems that the proton lifetime has been pushed out to 10^33 years. The list of decay modes at left is not exhaustive. There are other modes under investigation that would suggest supersymmetry if found.

Proton decay implies violatiοn of baryon number conservation, 1 baryon becomes zero baryons, so the three quarks of the proton disappear, and a pion , quark antiquark appears out of the interaction. 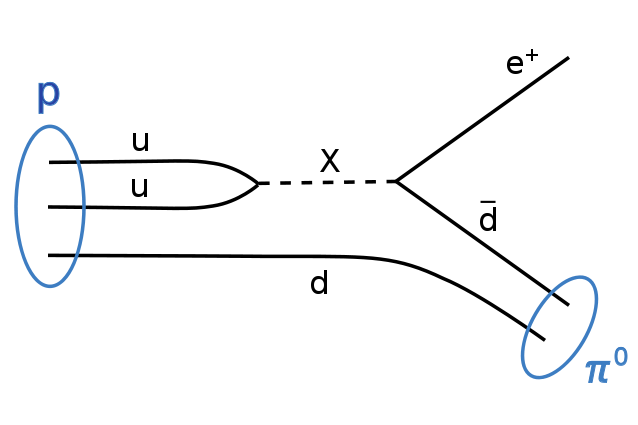 Here X is a new boson introduced by the Grand Unification Model.

Note that in the decay products lepton number conservation is also violated.

At this point of theoretical calculations the experimental limits have not shown that protons decay.