Can a heat engine cool its heat source?

Another way to put my question would be: Can a heat engine act as a negative thermal resistance? Though that wording makes me expect the answer is “no”.

Then assuming suitable mechanical interfaces (e.g. flat plates of a common shape), we can compare two different configurations: one in which the heat source is directly joined to the heat sink (A), and one in which the hot and cold ends of the heat engine are interposed (B). 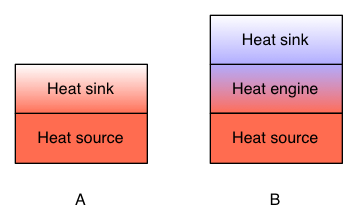 Is it possible for case B to have a lower temperature of the heat source, assuming suitable (physically realizable) characteristics of the heat engine? If it cannot, can the answer be explained in terms of a simple prohibition based on a physical principle (e.g. some of the laws of thermodynamics)?

The answer initially seemed obvious to me: the heat engine is an obstacle between the source and sink and therefore must present some effective (positive) thermal resistance and thus result in a greater temperature of the source in case B than in case A. Someone else thought that the engine would have a cooling effect since it acts to remove some heat from the overall system (turning it into work). I find this implausible but can't think of how to prove it either way.

Yes, the heat engine can speed up the transport of heat from the heat source to the heat sink if you add external work to make it happen. In fact, we have mechanical devices that are built precisely for this, and both cars and overclocked computers wouldn't work without them. They're called "radiators" and they are heat engines run as refrigerators. Granted, they're not usually reversible, because we value power over efficiency, but heat pumps, refrigerators, and engines are all in the same class of devices, thermodynamically.

If you're asking about whether the heat engine will speed cooling while extracting work from it, then no, it won't. The speed at which the engine can take in heat is rate limited by the size of the thermal gradient, by the heat conduction equation: $$P = -k A \frac{\Delta T}{\Delta l},$$ where $k$ depends on the material conducting the heat, $P$ is the power, $A$ is the cross sectional area of the conductor, $\Delta l$ is it's length, and $\Delta T$ is the change in temperature across it. Interposing an engine between the heat source and sink can only make the gradient at the heat baths' interfaces more shallow because an engine that is extracting work is, by necessity, at a temperature between those of the heat baths.

Edit 2018-10-15: The above analysis is based on the assumption that the 'heat sink' and 'heat source' are thermal baths (i.e. they're objects that won't change temperature no matter how much you add or subtract heat). In reality, most heat sources are more accurately approximated as 'power sources' (i.e. sources that put out heat energy at a constant rate regardless of temperatures).

More importantly, though, it's not possible to bring a heat source into contact with its actual heat sink. The reason? In any given situation your heat sink is located however far away the heat source's energy have to get away from the source before its diluted enough to no longer change the temperature significantly. Thus, there is always some conduit between the actual heat source and heat sink, so it is possible to select your conduit in such a way as to reduce that distance.

For instance, if you take a computer that is producing heat and immerse it in an inert non-conductive fluid (e.g. mineral oil) the oil will conduct heat more rapidly than air and have a higher heat capacity for a given volume, reducing that distance to the heat sink.

If the heat source is high enough temperature, it can also increase the rate at which heat is transported if it sets up a convective current, since the moving fluid will transport heat with its motion faster than conduction can move it. Thus, adding a "heat pump" that runs off of the thermal gradient it is dissipating can speed up the rate of cooling, but that is really a question of replacing an inefficient transport method with a faster one.

If heat source is finite, then as it loses internal energy to the sink, which happens whether or not heat engine is present, heat source's temperature decreases, until its temperature becomes equal to that of sink. A heat engine can only alter the rate at which this process happens, but not the final equilibrium state.

"heat engine ... must present some effective (positive) thermal resistance and thus increase the temperature of the source" is incorrect because by virtue of second law of thermodynamics heat must flow from hotter to colder body. But of course you $\textit{can}$ increase temperature of (finite) heat source by means of heat $\textit{pump}$, which is a reversed heat engine that takes some external work input.

Whether heat source's temperature would be greater in case B than case A, depends on specifics of the heat engine employed. If you attempt to make the heat engine as close to reversible as possible then all its processes must be carried out very slowly, and then given that power is constantly pouring into heat source, its temperature is bound to increase. On the other hand you could speed up the process of heat transfer and thus bring down the temperature of heat source. Take for example Rayleigh-Bernard convection, in which a fluid is placed between two parallel (infinite) plates, with top plate being at lower temperature than the bottom one. If the fluid is viscous enough not be set into motion, then heat transfer occurs purely by conduction and so greater temperature difference would be required for same power input (in steady state). However once convection begins (which is a kind of heat engine) the temperature difference reduces for the same power input.

Not the answer you're looking for? Browse other questions tagged thermodynamics thermal-conductivity heat-engine or ask your own question.