In its simplest form, my question is regarding a two level system of transition frequency $\omega_0$ given by the Hamiltonian \begin{equation} H = \frac{\hbar \omega_0}{2}\sigma_z \end{equation} Often (or always?) this transition frequency is not actually fixed; it can be parameterized by some value $\phi(t) = \phi + \delta \phi(t)$ where $\phi$ is the working point value so to speak, and $\delta \phi(t)$ is a small time dependent fluctuation, or in essence a random variable governed by some stochastic process; noise if you will. Commonly it has a vanishing mean and is much smaller than the working point value. Also important in what follows is that I would assume it to be a classical random variable; take for example fluctuating magnetic fields in the environment of the system.

One can include such noise by for example doing a taylor expansion of the above Hamiltonian and find that it has an additional term proportional to $\frac{\partial\omega_0}{\partial\phi} \delta\phi(t) \sigma_z$ (as well as higher order terms); the noise thus couples to the $\sigma_z$ operator and as one can imagine this leads to dephasing.

Now, such dephasing is often encountered in the context of open quantum systems, and from what I know it is dealt with by writing down master equations of the form \begin{equation} \dot{\rho} = -i \left[H,\rho\right] + \frac{\gamma_\phi}{2}(\sigma_z \rho \sigma_z - \rho) \end{equation} where $H$ is as given above and $\gamma_\phi$ is the pure dephasing rate.

Here comes my question though. In the above, any time dependence of $\delta \phi(t)$ (or more customary, its power spectral density) is completely gone; one has a term $\gamma_\phi$ which is probably the result of some Ramsey or spin echo type analysis of the Hamiltonian, but when for example doing simulations one simply plugs in $\gamma_\phi$ and calculates with that. What I am wondering about is what the assumption is here; what kind of noise do you assume to be dealing with (in terms of power spectral density) when you write down a master equation in the form of the above? Do you assume it is white over all relevant frequencies?

Maybe I can motivate my question a bit further. Say you have two coupled two level systems with equal transition frequencies of around, say, 4 GHz, and a coupling of 100 MHz. A simple calculation then shows that they hybridize into two new modes of frequencies 4.1 and 3.9 GHz. Now, I can imagine that if one then subjected these two systems to a noisy environment (in terms of their transition frequency) with a noise power spectral density that is white up to, say, 400 MHz, that one could actually induce transitions between the two modes. If however the noise was simply up to 10 MHz and then dropped to zero, I would say that you just dephase the qubits and nothing especially interesting happens.

So my question kind of comes down to how the above difference would be reflected in a master equation. For both of them one could define a pure dephasing rate through Ramsey or spin echo experiments (or even with lineshape broadening), but in the end the underlying noise is completely different. One can cause transitions, the other can not. Some approximation made in the master equation in the above form neglects this difference, but what? And what can I do when I do not want to make this approximation? How does one write down the master equation assuming environmental noise with an arbitrary power spectral density, assuming such $\sigma_z$ coupling and classical noise?

As a final note, I know that things become more complicated when you have noise around the transition frequency; lets neglect this for now. The same goes for noise with quantum power spectral densities, although perhaps that is still relevant as the classical noise should be a limit of this; perhaps some bosonic bath.

$\def\ii{{\rm i}} \def\dd{{\rm d}} \def\ee{{\rm e}} $ It turns out that the case of pure dephasing is exactly solvable, and one can obtain nice solutions under certain conditions. In particular, I will consider the case of Gaussian, stationary noise.

Given a realisation of the stochastic process $\delta\hat{\omega}(t)$, one can compute the corresponding coherence $\hat{\rho}_{01}(t)$ using the above. Note that $\hat{\rho}_{01}$ is also a random variable describing a typical evolution of a single qubit. More useful, however, is a description of the ensemble obtained by averaging over many identically prepared copies of the system, since this is what one actually does in the experiment. Thus, what we really want is $$\left \langle \ee^{\ii\hat{\Phi}(t)} \right\rangle = \ee^{-\Gamma(t)},$$ where the angle brackets denote an average over many realisations of the noise, and the formal object $\Gamma(t)$ is called the decoherence function. It follows from the above that the ensemble-averaged density matrix $\rho(t) = \langle \hat{\rho}(t)\rangle$ obeys the exact, non-Markovian master equation $$ \dot{\rho} = -\frac{\ii}{2}\left(\omega_0 - \Sigma(t)\right)[\sigma^z,\rho] + \frac{1}{2}\gamma(t)\left( \sigma^z \rho \sigma^z - \rho \right), $$ where the dot denotes a time derivative and we defined the energy shift $\Sigma(t) = {{\rm Im}}\left[\dot{\Gamma}\right]$ and the decoherence rate $\gamma(t) = {{\rm Re}}\left[\dot{\Gamma}\right]$.

Now, for almost any realistic noise source, the autocorrelation function $f(\tau)$ must eventually decay to zero when $|\tau|$ is greater than some time scale denoted $T$. For times longer than $T$, one may extend the integration limits to $\pm \infty$ in the equation marked $(*)$ above. This leads to an asymptotic decay rate $\gamma_\infty = \lim_{t\to \infty} \gamma(t) = \pi S(0)$.

The Markov approximation consists of the assumption that this time scale $T$ is much shorter than the typical time scale of the qubit's noisy evolution, which here is fixed by $\gamma(t)$ (or rather its inverse). This is equivalent to saying that the noise power spectral density varies slowly over a frequency scale $\sim\gamma(t)$. In this case, it is possible to immediately replace $\gamma(t)\to \gamma_\infty$ with negligible error, leading to simple exponential decoherence $\rho_{01}(t) \sim\ee^{-\gamma_\infty t}$. This is most easily illustrated with a simple example, as follows.

The plots below show the exact evolution of (the absolute value of) the qubit coherence for two examples, with the Markov approximation included for comparison (dotted line). The first plot shows $\Omega = 2\gamma_\infty$, where the transient dynamics differs significantly from the simple Markov result. The second plot shows $\Omega = 100\gamma_\infty$, in which case the noise memory time is negligibly short and the Markov approximation is accurate for all practical purposes. Note, however, that there always exists a time regime $t\ll \Omega^{-1}$ where the dynamics is non-Markovian. Nevertheless, whenever the Markov assumption $\gamma_\infty\ll \Omega$ holds, the system barely evolves over such a short time and thus the non-Markovian aspects of the evolution are not seen. 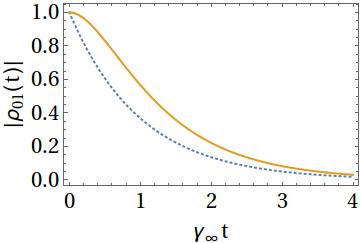 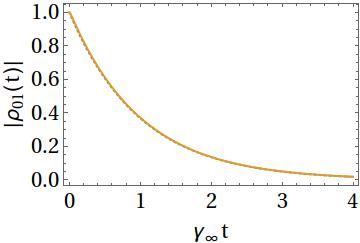 Just for fun, here's a more complex example. Consider the following spectral density $$ S(\omega) = \frac{\alpha}{\Omega^2} \omega^3 \left[ 1 - \mathrm{sinc}\left( \frac{\omega}{\varpi}\right) \right] \ee^{-\omega^2/(2\Omega^2)}.$$ Such a spectral density can be realised with a qubit comprising two localised states of an atom in a double-well potential. If this atom is plunged into a cold bosonic gas forming a Bose-Einstein condensate, it decoheres by scattering atoms in the condensate and thus generating phonons. In particular, if the impurity atom (i.e. the one forming the qubit) is prepared in a delocalised state, i.e. a coherent superposition of being localised in the left well ($\lvert 0\rangle$) and the right well ($\lvert 1\rangle$), over time this coherence vanishes. The coupling $\alpha$ is proportional to the scattering cross-section for impurity-gas collisions, while $\Omega = c/\ell$ and $\varpi = c/L$, where $\ell$ is the width of the wave functions describing the localised states, $L$ is the separation between the double-well minima, and $c$ is the speed of sound in the gas. More details can be found in, for example, one of our papers here.

The second recoherence phase (occurring at $\Omega t = 10$) has a particularly pleasing physical interpretation: it always occurs at a time $t = \varpi^{-1} = L/c$, which is the time taken for the disturbance in the superfluid generated at one potential minimum to propagate to the other one. Thus some of the lost coherence is regained due to the fact that both localised states interact with a common superfluid reservoir. However, this only comes into effect after some time delay due to the finite speed of signal propagation in the superfluid. 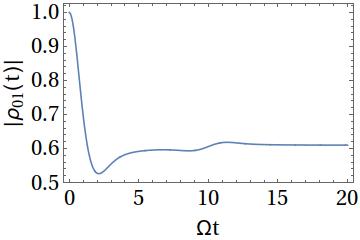 Not the answer you're looking for? Browse other questions tagged decoherence open-quantum-systems two-level-system or ask your own question.

15
What information is contained in the quantum spectral density?
4
Classical noise approximation of a system coupled to a quantum environment
5
Classical approximation of coupling to a quantum bath
3
Why is a continuum of bath modes required for irreversible dynamics?
13
Numerical Simulation of Stochastic Master Equation using Stochastic Schrödinger Equation (Wave Function Monte Carlo)
5
Hermitian and non-Hermitian jump operators in Lindblad master equation