Which force pushes a ball away from the center of a spinning disk?

Here is a question from my book. 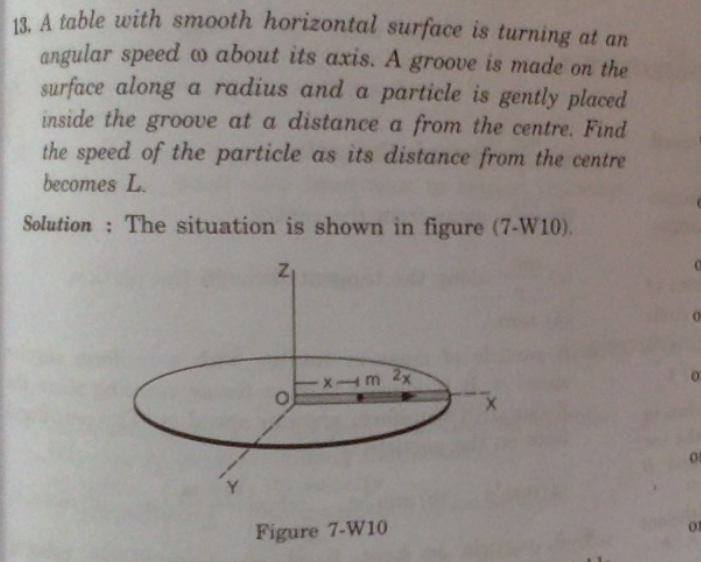 I need to know which force is acting on the ball, making it move outwards?

Here is an attempt to explain what is going on in the (inertial) frame of reference of the world:

The red vector is the force from the side of the groove on the ball: as a result the ball starts to move. Initially, it will get the same lateral speed as the groove - if it's at a distance $r$, and the disk rotates at $\omega$, the velocity will be $v=r~\omega$.

A moment later, the groove will be at a different angle - but the ball tries to keep going in a straight line. It will have moved to a new radial direction, where the groove is going faster than the ball. As a result, it will once again feel a force of the wall, and it will accelerate in a new direction; I tried to indicate the new velocity as the vector sum of the old velocity plus the acceleration.

Obviously you can repeat the diagram for subsequent positions of the disk.

When the ball is stationary in the groove (in the rotating frame of reference), the only force it experiences is the centrifugal force (this is right after the initial impulse that will have given the ball the same velocity as the part of the groove where it was placed). As soon as it starts moving outwards (under the influence of the centrifugal force) it will also start to swerve (under the influence of the Coriolis force). The groove will exert a force equal and opposite to the Coriolis force to keep the ball moving in a straight line in the groove.

In the rotating frame of reference, the radial acceleration of the ball can be calculated directly from the centrifugal force. The total velocity can be arrived at by calculating both the radial and tangential components of the velocity (tangential velocity is $r\omega$).

I will leave the details up to you.

You could think of this in terms of Fictious Forces.

What if i look at it from the ground? Which force will be then responsible to make it move towards the left?

In your example, the groove constrains the ball from moving sideways.

As this a homework type question, I can give you an outline and references for you to read yourself. We have Newton's laws for when we are examing an inertial (non accelerating) frame of reference. When we move to a rotating frame of reference, we acquire extra forces, called either inertial forces or pseudo forces.

These forces are called the Coriolis Force and Centrifugal Force

However, the only "real" force acting on the ball is the normal force from the side of the groove, which points tangentially. So, the net effect on the ball is that the direction of its velocity vector is constantly being turned to point outward radially.

4
How does centrifugal force work?