What is wrong with my setup of cloud chamber?

I can see a 'rain' of particles of alcohol, but no traces.

I disassembled smoke detector and attached the sample of americium to the box. No effect.

Here are some pictures of the setup: 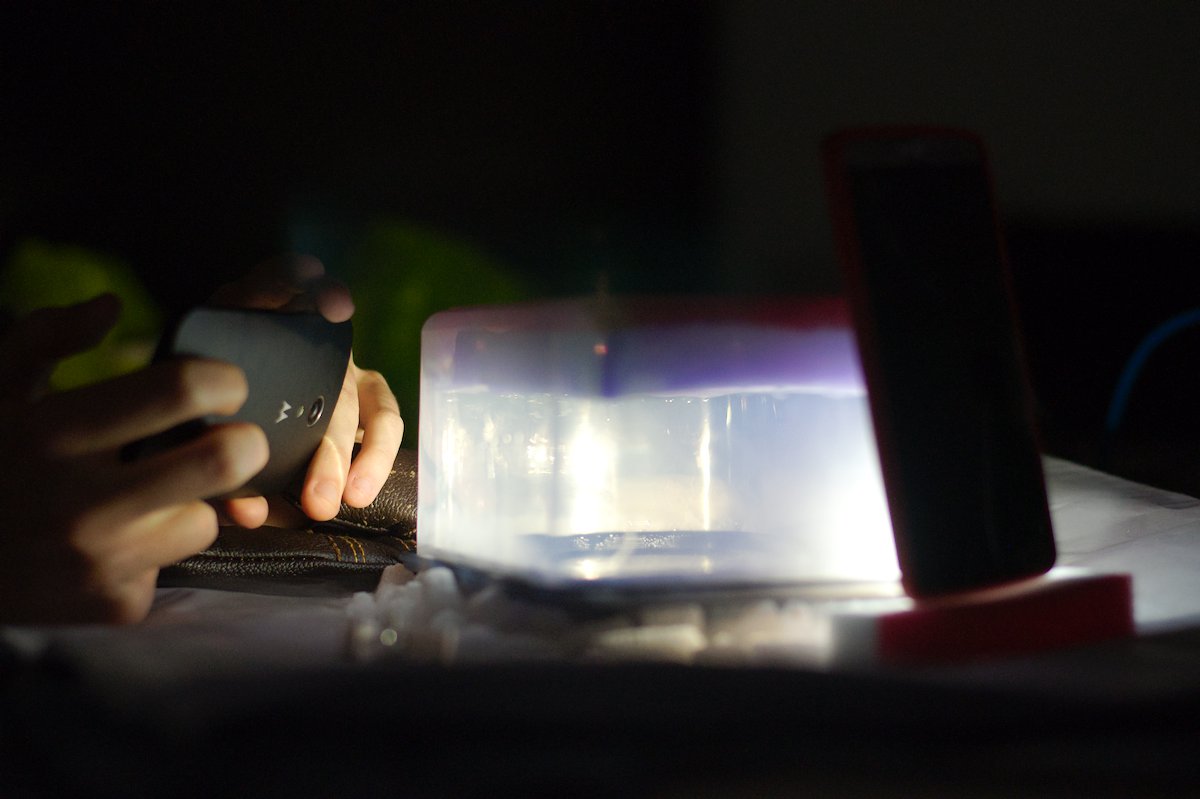 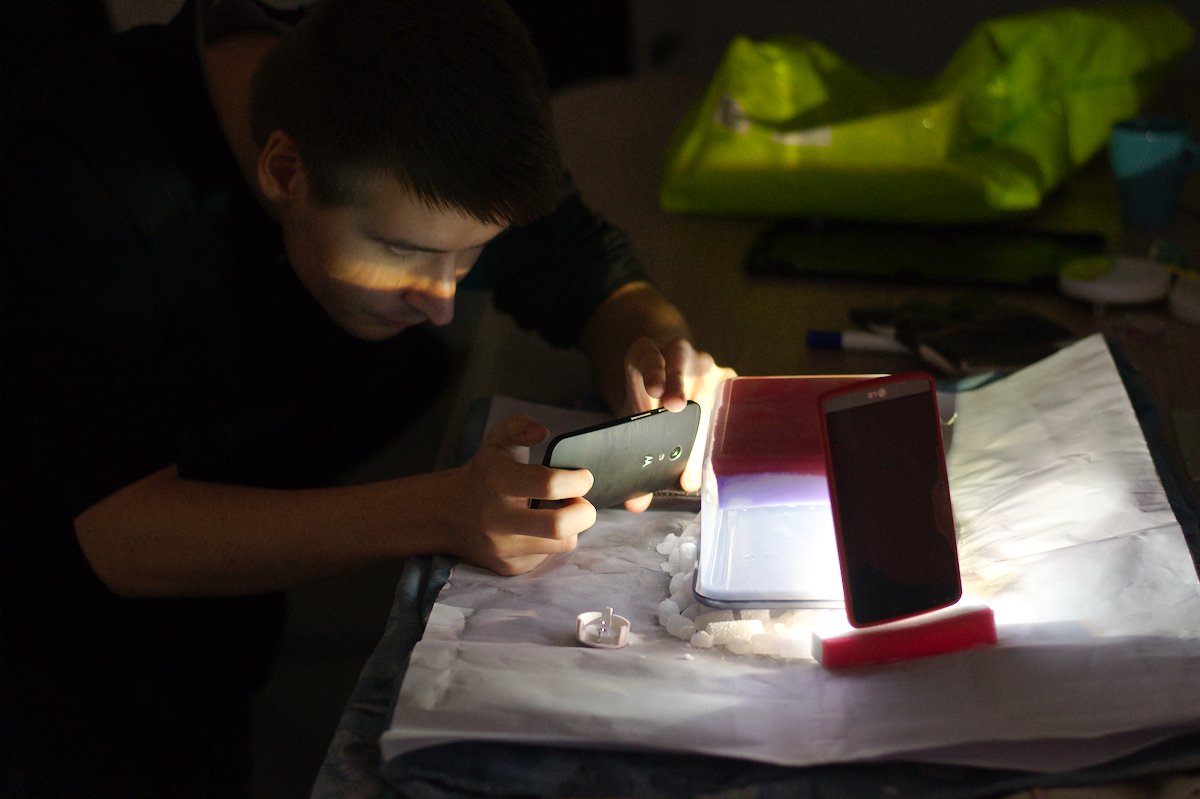 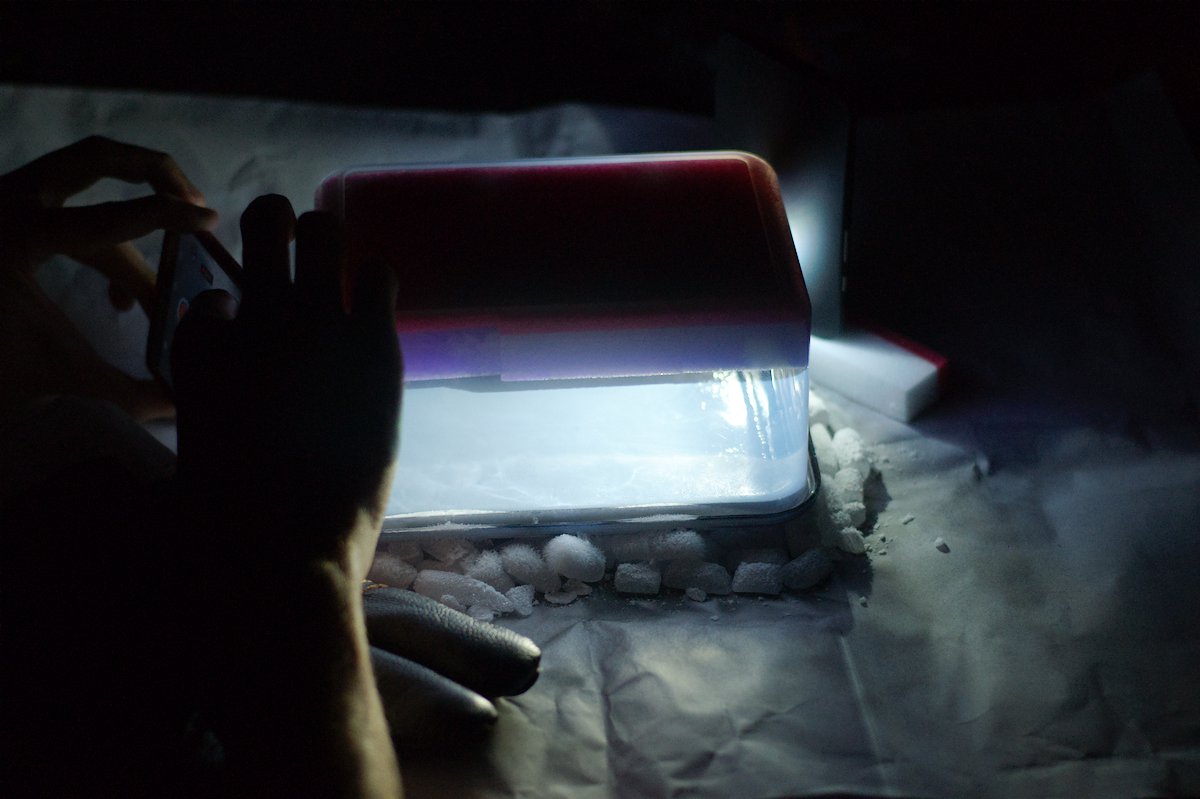 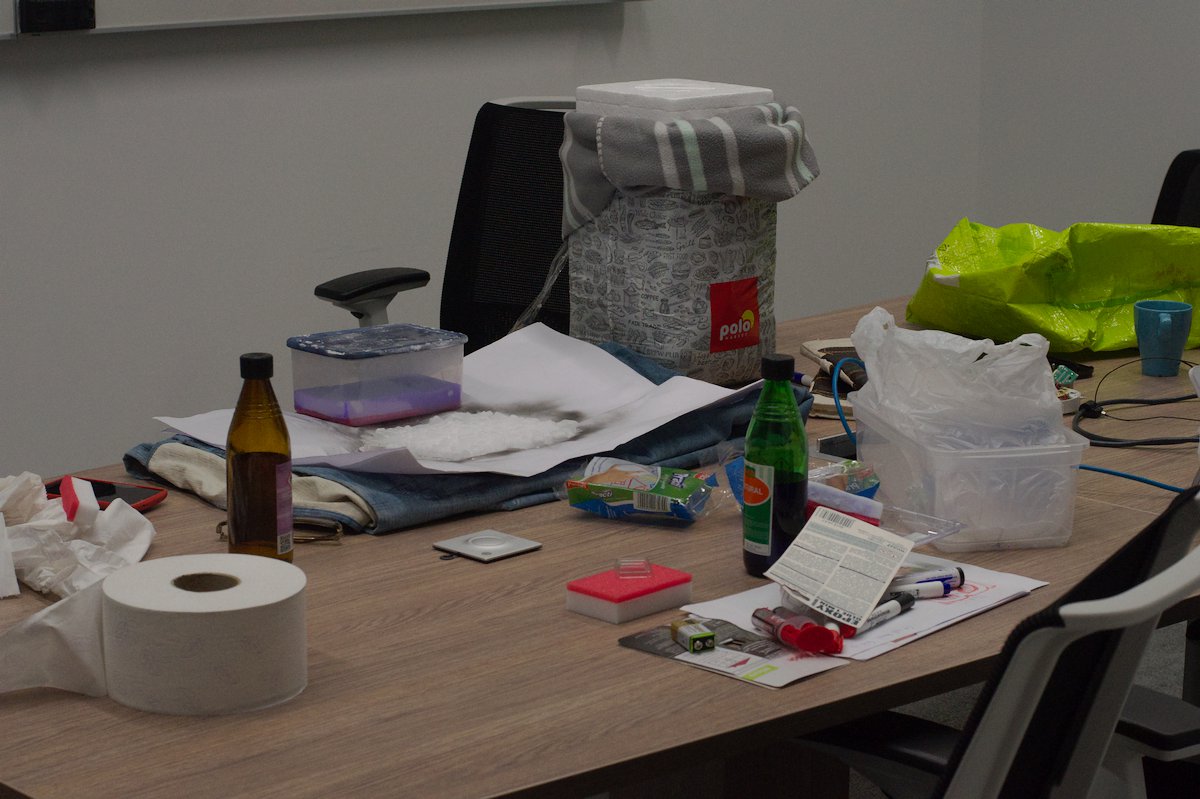 I tutor a cloud chamber workshop at CERN weekly, and during the development of this workshop several setups where tested until the (relatively) easiest way to build one was found.

Based on the video you showed, I would say your alcohol cloud is not stable enough. As far as I can estimate without seeing your setup live, I think the reason for this is your alcohol source and the inhomogeneity of your plastic cover.

For the alcohol source, a sponge is not the best option. Felt is more efficient at absorbing a lot of alcohol and releasing it uniformly. Furthermore, the more pure your alcohol is, the better. We use isopropanol (which should not be too difficult to find in a drug store as it is commonly used for cleaning and disinfection), but ethanol should do fine as well (but try to get at least 95%).

For your plastic cover; well, plastic doesn't conduct heat too well, so neither does it pass the cooling from the dry ice in an efficient way (and more importantly, the little cooling that is transferred will be very inhomogeneous; this is clear from your video). You can keep using your plastic box (glass will probably be nicer, although we use plexiglass ourselves), but you cannot use the plastic cover. Try to use any kind of metal, as dark as possible. We use a black anodised aluminium plate as our base plate, which has a groove where the box fits in. We fill the groove with alcohol before putting the box, to make it airtight. This kind of plate won't be easy to construct yourself (especially the groove), but you can use for instance a big black frying pan (you know, those coated in teflon) and put your box on it. The added bonus is that a pan is by definition a very good conductor. The only thing you have to make sure is that it is sealed airtight to the plastic box; do this by putting some alcohol along the borders of the box and try to keep it in place (if needed even by taping it). 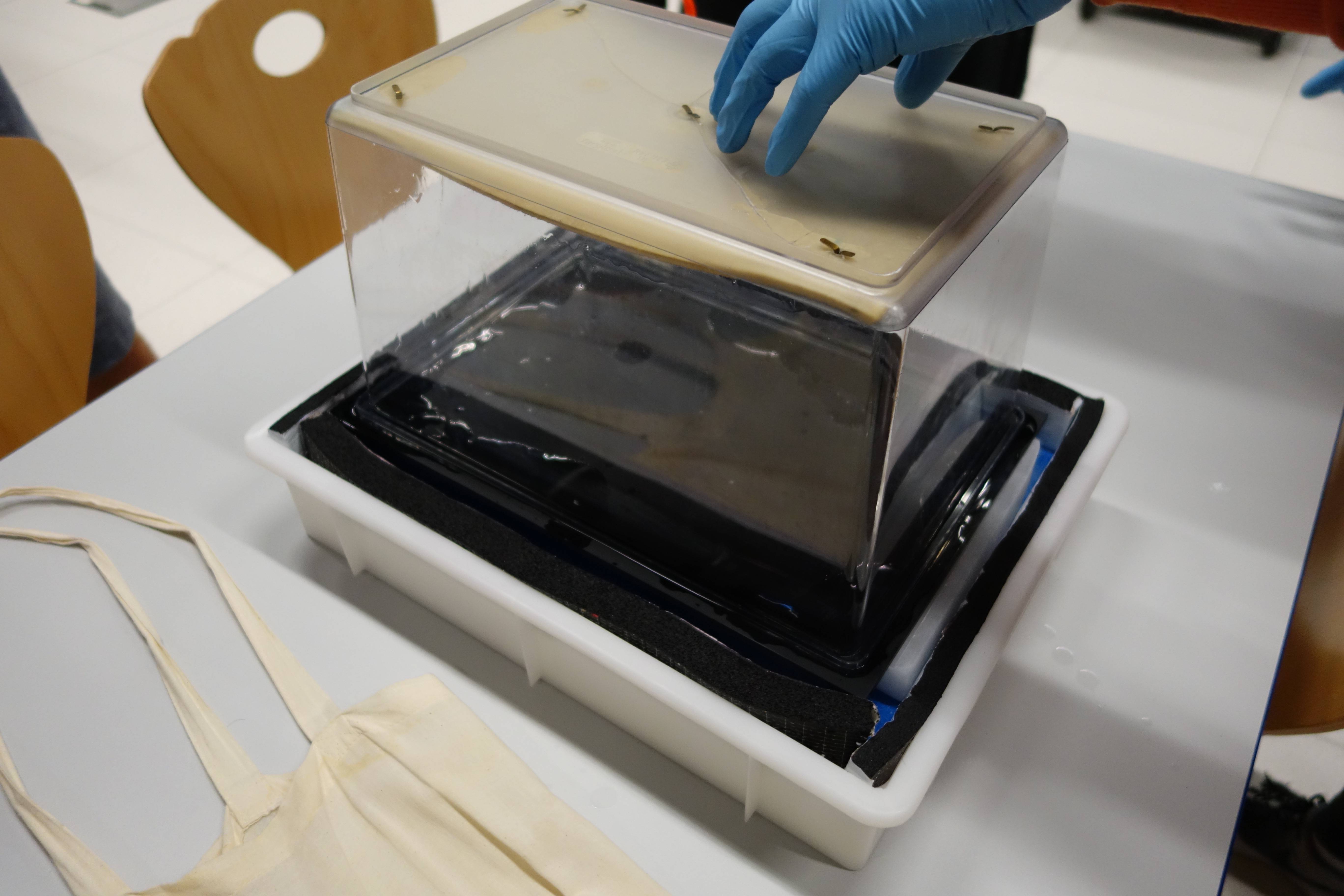 Also take into account that the cloud needs a few minutes to form, but about 10 to 15 minutes to be stable enough to show tracks.

By the way, if you want to use an $\alpha$ source you have to put it inside your cloud chamber, because -as was already mentioned in the other answers- $\alpha$ particles can be stopped by a sheet of paper and hence won't be able to penetrate your box. We never use radioactive sources but see lots of tracks from cosmic radiation (mainly muons), and a few from natural background radiation. The air contains for example Radon, which is a natural $\alpha$ source. In our cloud chambers this accounts to more or less 3 $\alpha$ particle tracks per minute; in yours I would estimate this to be on average 1 per 2 minutes (but keep in mind that the Radon concentration varies geographically, with the weather, and has some other factors, so it could be much more or less). You should be able to see a lot of muons though.

Ps: another thing is that a smartphone flash is not an ideal light source; it is too spread out and the colour temperature is adapted to human skin, not cloud chamber tracks. A standard torch should do better.

My personal experience is that the sponge (I used felt) needs to be thoroughly soaked in alcohol. Methanol (easier to obtain than pure ethanol) seems to give the best results.

With that set up I could see radiation emitted by thoriated welding rods (TiG electrodes) when placed inside the box. Like Am-241, Th-232 is mainly an $\alpha$-emitter and $\alpha$ particles can't penetrate the plastic of the box. Even in air they have a very short range. So when using the radiation source of a smoke detector, place it inside the cloud chamber on a little 'pedestal' to see the traces.

You said, you attached your americium to the box. As far as i know, americium is an alpha emitter, so the alpha-particles should be blocked by the box.

Try to put it inside the box. Maybe, this helps.

If it does not work, with the sample inside the chamber, you can be pretty sure, something is wrong with your setup. If it does work, it is just to insensitive for light particles.

These things are more difficult to set up than the YouTube videos make it appear (also: the videos are often misleading in terms of the number of tracks you can expect from a simple smoke detector source. If you see dozens of tracks, they used a much more powerful source.)

1) Put the source inside the cloud chamber. The range of alpha particles in air is only a few cm.

2) More highly concentrated alcohol (>90%) works better. I think a large part of the problem is that water in the alcohol tends to condense and freeze on your container.

3) You have to wait (and not touch anything) for a few minutes (10-15) for the conditions in your cloud chamber to be right. Even in that case, the active layer of a simple chamber like this is only a cm or so.

4) Glas works a little better that plastic (you can see better). Even a small jar is fine (an old fashioned pickle jar), the active volume is not large anyway. The container needs to have some height, so that vertical gradients in vapor concentration can develop.

Not the answer you're looking for? Browse other questions tagged particle-physics experimental-physics radiation radioactivity particle-detectors or ask your own question.