Why does a spinning top get back upright when knocked?

I have observed that, a spinning top, when toppled by knocking it with finger, becomes almost upright again (with negligible precessional motion), instead of undergoing precession while being heavily leaned.

I cannot find which force produces the required torque to make it upright.

(Please note that my question is not exactly why a top does not fall due to gravity, which has already been answered.)

EDIT: See this youtube video for an example of this "stabilization". Compare the lean of the top at the beginning of the video to the lean at time 1:30.

The torque that rotates a top upright, as happens in that youtube video, is due to sliding friction between the top and its supporting surface.

Crucial to this effect is the fact that the top in that youtube video has a rounded bottom, instead of coming to a sharp point at the bottom like some tops do. The effect is more pronounced and dramatic in tops that have a larger radius of curvature on their bottom, such as in the extreme case of a tippe top, which has a radius of curvature so large that it's possible for the top's center of mass to be at a height that's smaller than the radius of curvature. Indeed, the papers I've seen that show how sliding friction causes a top's center of mass to rise are specifically doing an analysis of a tippe top.

The analysis of a top in full generality, including the effects of friction, is quite complicated. To simplify the analysis enormously, I'll just look at the top at an instant in time at which the top has no linear momentum, and has a very large angular momentum that lies precisely along the top's axis of symmetry.

I'll also consider gravity to be negligible in this simple explanation. Gravity causes a purely horizontal torque on the top, but we're only interested in torque that has a vertical component, which will cause the top to become increasingly upright. In reality, if it weren’t for gravity holding the top and the table together, there wouldn’t be any sliding friction at the point of contact between the two, but we will simply assume that the sliding friction exists, without considering how the sliding friction is related to gravity. 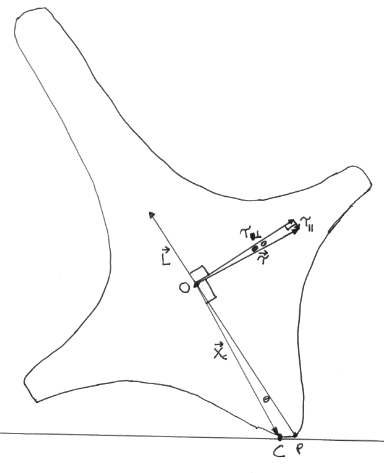 Because the top has a rounded bottom instead of a pointed bottom, the top's point of contact isn't at $P$, but rather at some point $C$. From the assumptions stated above, at the instant of interest $P$ is stationary. In contrast, from the direction of $\vec{L}$, at $C$ the surface of the top is moving towards the viewer, straight up out of the plane of the diagram. The sliding friction is a force $\vec{F}_k$ (not shown) on the top at $C$, in the direction opposite to the top's motion at that point, i.e., straight down away from the viewer.

The torque $\vec{\tau}$ can be written as

The torque $\vec{\tau}$ is how the top's angular momentum $\vec{L}$ changes with time,

For a much more detailed analysis of how sliding friction on a top's bottom causes the top's center of mass to rise, see pretty much any paper on the tippe top, such as this one.

The top is a symmetric rigid body. The equations of motion of a rigid body around its center of mass are given by: (Please, see for example: Marsden and Ratiu , (page 6).

When a small external force limited in time is applied to a harmonic oscillator, it returns to oscillate in its natural frequency around its equilibrium position. The same happens when the top is knocked, in this case a small limited in time torque is applied. If the angular momentum around the third axis is very large such that: $$I_3 \Omega_3>> \int T_3 dt$$ Where $T_3$ is the torque component along the third axis, thus the right hand side is the impulse due to the torque application. In this case the application of the toque will not change the top's angular velocity much and all our above assumptions guarantee the stability of the top.

Consider an image bellow, A spinning top is rotating with an angular velocity $\omega$, Therefore it has an angular momentum $\vec{L}$, Faster it spins greater the $\vec{L}$ and more it tends to remain its rotational motion about a certain axis, Note that when it slows down (Due to frictional forces) it has smaller $\vec{L}$ Thus its precession increases due to its weight pulling it down. (A Gyroscopic effect demonstration video)

Notice that Force of gravity caused our spinning top to precess (precess its axis of rotation) Thus we can conclude from this observation that a force must be applied to change spinning tops axis of rotation, Greater the force applied more it will precess from an original axis of rotation (assuming $\vec{L}$ is constant). When this force is removed it will naturally return to the original state with no precession because of it having angular momentum.

We can recreate this law for rotational motion:

Where $r$ is a distance from the point of rotation and $\vec{F}$ is force applied.

Note that torque is a vector and this vector is represented in the image bellow:

spinning top becomes almost upright again because it has angular momentum and that means that if an object spins it is resisting its axis of rotation to be precessed and faster it spins more it is resisting this precession to occur so if I tipped it over if it still spins with same angular velocity it will return to zero precession, faster it spins faster it will return to its original state.

its angular momentum is defined as:

Then we can express $\Delta \theta$ as following:

Angular velocity of precession can be expressed as following:

now we can substitute first equation in this one.

Torque is defined as change in angular momentum:

Now we substitute this in previous equation:

and we get the following formula:

From this equation we can see that if we apply a force on a spinning object its $\omega_p$ will increase because it is directly proportional to force applied. If force applied is zero, $\omega_p$ becomes zero as well, therefore it will no longer have precessional angular velocity thus it will stand upright again.

To understand gyroscopic precession intuitively, without using moment vectors, consider this orbiting satellite analogy. Watch “TheHue’s SciTech” video from 25 seconds until you are comfortable with predicting which way a gyroscope will precess when a rotational moment is acting upon it. https://www.youtube.com/watch?v=n5bKzBZ7XuM . Now consider Red Acts’s diagram as shown in his answer, his top is spinning anti-clockwise when viewed from above, because the frictional force F is pointing away from the viewer, opposite to the surface of the top. This creates a rotational moment in the plane occupied by contact point C and the top’s centre of mass O. Resolve this moment into a plane parallel to the rotating components of the top, and a plane perpendicular to them. The parallel component only causes a slowing down of the top, without precession. The perpendicular component of this moment is the one that causes precession of the top back to vertical. This moment's direction of rotation causes a force that pushes on the edge of the top nearest the viewer towards the bottom end of the top, and upwards on the opposite side. But like the satellite analogy, those edges do not actually move up or down - it’s the edges to left and right of the viewer that actually move. The edge to the viewers right moves down, and the edge to the left moves up. And this is the precession that brings the top vertical. I realised a while ago that this is what’s happening to a Tippe Top, but there’s so much more going on with a Tippe due to fact that it’s a sphere with a large radius.

Not the answer you're looking for? Browse other questions tagged angular-momentum rotational-dynamics conservation-laws gyroscopes precession or ask your own question.