A Twist in Twin Paradox

Intuitively, the one on Earth should age faster regardless whether the travelling twin comes back or not. I just don't quite know to wrap my head around this new puzzle. Lastly, please explain it to a layman. I only have taken introductory physics courses.

Since this is a thought experiment, any assumption can be made to ask a question that invokes deep thinking answers (maybe there is no real answer, but let try to hear out some thoughts and discuss about it!). Let assume a few things:

Edit with regard to assumption 2:

Assume Earth and planet A are at rest with respect to each other.

There is a problem of synchronization. For showing this it is best to sketch the two spacetime diagrams of Earth and of the spaceship.

We take the following example: A spaceship is traveling at 0,8 c from Earth to the exoplanet A which is at 100 LY from Earth.

From the point of view of Earth we get an absolute distance (there is no Lorentz contraction) of 100 LY and a traveling time of 125 years. We can calculate a proper time of the spaceship (its aging) of 75 years (Lorentz factor $\gamma = 1,6667$). 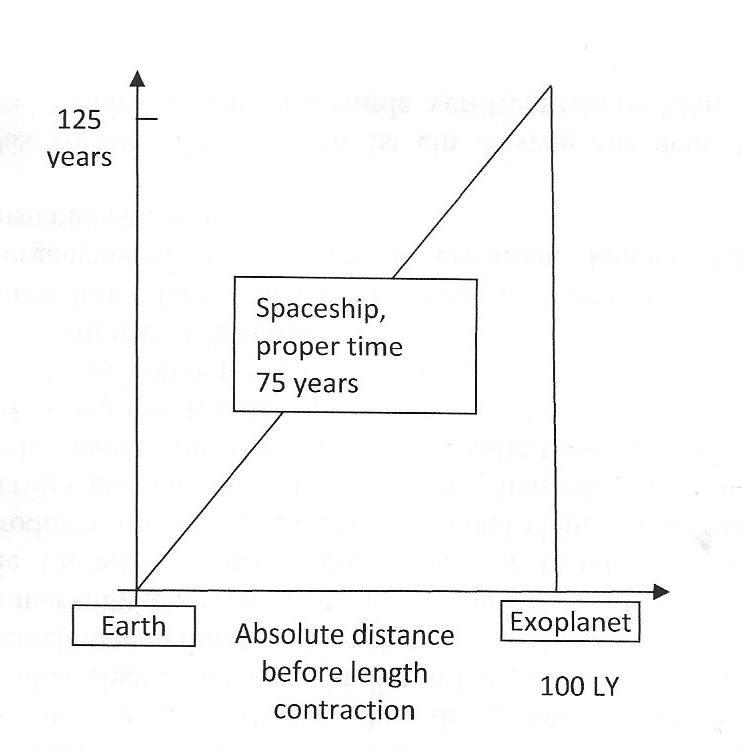 Now we sketch the spacetime diagram of the spaceship. As we have calculated, its proper time is 75 years. The distance is contracted by $\gamma$ from 100 years to 60 years. From the point of the spaceship, Earth (and the exoplanet A) are traveling in 75 years 60 lightyears. These data do not correspond to a proper time of Earth of 125 years, but only to 45 years! 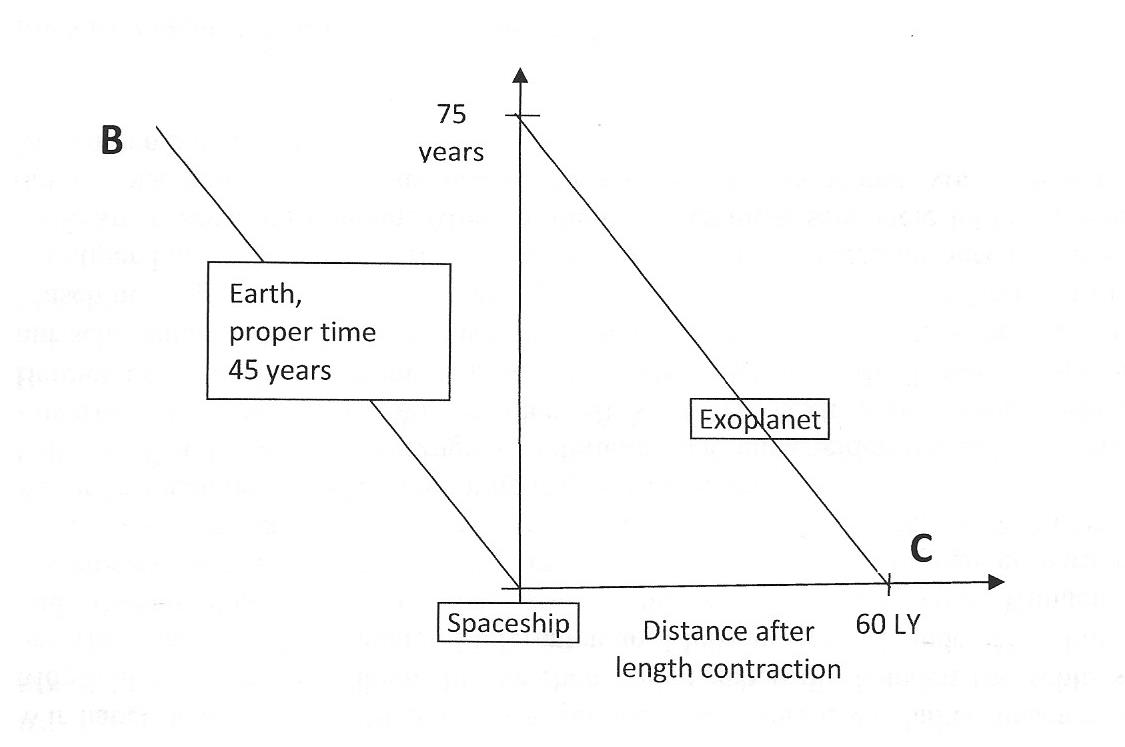 If you want, there are two different realities, one of the spaceship and one of Earth. Only synchronization permits to avoid this twofold reality.

It's possible to make sure there is an age difference even without going back to Earth. (F.e. the one of the twins could send the other a message like "now I am 20 years old", as soon as message received the other attaches his age to the message "I am 20 years 20 days old" and sends it back, and so on. The message would grow in size and eventually would look like:

and from this list we can see that "speed of time" is identical for both twins but one of the them is older than the other.

The "return back to Earth" step is used to make the paradox more obvious: here are both of them, how come this one is younger, why not the other one? But paradox remains even if they do not meet ever again.

Actually paradox starts here: we have two twins traveling in opposite directions. And from the point of view of each them the other twin is aging slower! Isn't it weird? Theory of relativity says that's ok. Sounds like nonsense. And it's a very natural attempt to construct a paradox to make this nonsense obvious. After all it's impossible that each of the twins is aging slower the other, isn't it? Let's bring them together and just look at them. Each of them expects the other to be younger, but that simply can not be, so the theory of relativity is, well, not correct!

But there was a mistake here. The mistake is done by traveling twin. Yes, from his point of view his brother was aging slower than him. Almost. Something very interesting happened during the "turning back". Let's assume the acceleration was very high, so the whole turning back took a very short time.

Suppose it took several milliseconds to fully stop his spaceship. During these milliseconds the earth suddenly became much-much farther from him. (the imaginary ruler stretched from the Earth in his direction is staying still now and thus the is no length-shortening effect). And time on Earth advanced for several years! Now he accelerates to full speed, the Earth becomes much closer again and time on it advances several more years.

From now on time on Earth goes slower than his time, but as a result of these "jumps" during acceleration when he comes home he would see that his brother is older than him.

So, the relativity theory says: no paradox here. Traveling twin will be younger. When you tried to describe the situation from his point of view and show that the home-sitting brother will be younger you made a mistake.

The deceleration/acceleration story is camouflage devised by Einstein in 1918 (nowadays most Einsteinians admit that the turning-around acceleration is immaterial). The conclusion validly following from Einstein's 1905 postulates is: The moving twin is aging slower as judged from the stationary twin's system, and the stationary twin is aging slower as judged from the moving twin system. "Aging faster" is an invalid conclusion (does not follow from the postulates). The original invalid conclusion (the stationary clock runs FASTER than the moving clock) was advanced by Einstein in 1905:

http://www.fourmilab.ch/etexts/einstein/specrel/www/ ON THE ECTRODYNAMICS OF MOVING BODIES, A. Einstein, 1905: "From this there ensues the following peculiar consequence. If at the points A and B of K there are stationary clocks which, viewed in the stationary system, are synchronous; and if the clock at A is moved with the velocity v along the line AB to B, then on its arrival at B the two clocks no longer synchronize, but the clock moved from A to B lags behind the other which has remained at B by tv^2/2c^2 (up to magnitudes of fourth and higher order), t being the time occupied in the journey from A to B."

Not the answer you're looking for? Browse other questions tagged special-relativity inertial-frames time-dilation observers or ask your own question.

-1
A question on twin paradox