Rainbow in cloud near Sun

Recently, it was a fine sunny morning (around 100 minutes after sunrise) and the sun was briefly behind a small cloud. Near the sun was one of those wispy clouds one sometimes sees (possibly Cirrus clouds?), at the very top of which I suddenly saw a very bright 'band' of rainbow (wider in the red to violet direction than a normal rainbow, and spanning the width of the cloud) and perhaps 15 or so degrees away from the sun. I unfortunately did not have a camera so my appalling paint drawing will have to suffice (the lines are the cloud, and the band is the approximate size of the band of rainbow; the omelette is the sun behind a cloud). It was very bright at first and surprisingly vivid (all colours red through violet), but faded within about 20 seconds from when I saw it; it was one of the most remarkable things I have ever seen: a bright rainbow band in a small cloud near the sun. My question is: I know about iridescent clouds, and circumhorizontal arcs, but does anyone know what this would be since it was a band of wide rainbow spanning the width of the cloud, so near the sun?

Edit: From what's been said, I think what I saw was likely a sun dog, something I've been waiting years to see, and didn't even know it when I saw one! The interesting thing about this one was that it had distinct blue and violet bands in addition to the rest of the spectrum, something I haven't seen in any pictures (although I am aware that cameras don't necessarily capture violet well), and which some sites e.g. here and here appear to imply is not a feature of most sundogs, with a blue-white tail instead being typical. I wonder if anyone could explain what might make one more distinct. Perhaps increased stability of the ice crystals might be the answer, or is it more likely that the violet band was not actually as vivid as I remember it to have been?

There is a full display of these that can occur. The picture here illustrates one of these 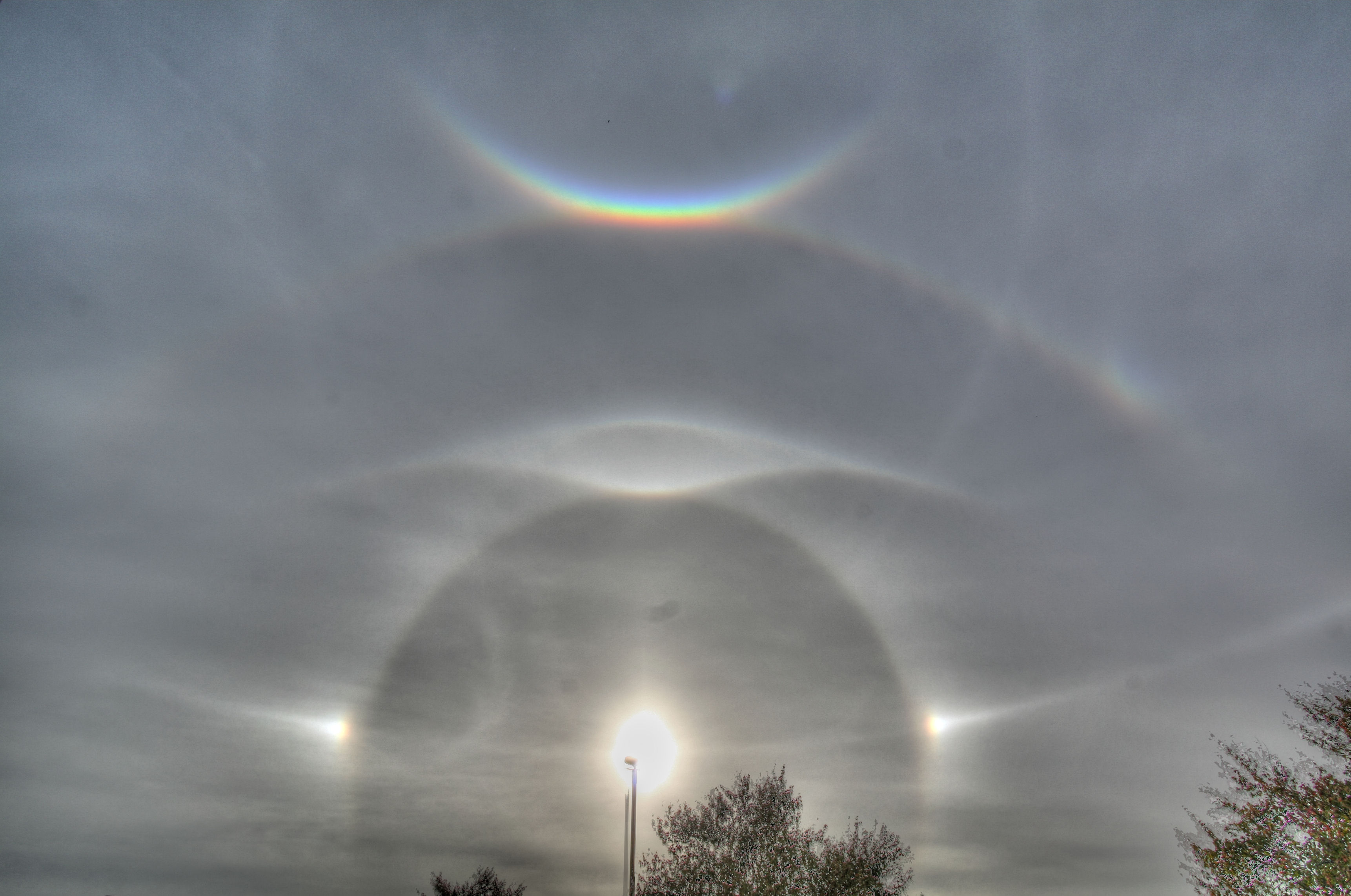 The names given to the parts of this are seen below. This is a St. Petersburg display. I first saw one 25 years ago. I shut the hatchback on my car and the circumzenithal arc (see image below), the one at the top arcing away from the sun, was reflected in the hatchback window. I looked up and was rather stunned. I have seen two other such displays and photographed one of them as I was home at the time with a camera. The last one I saw was maybe 7 years ago.

These occur with ice crystals, such as cirrus clouds. The different arcs are due to different paths through hexagonal prism ice crystals. If you are interested you can visit this web page to get more of the atmospheric physics on this. Sundogs are the most common feature to appear. They are common in the early morning. A full display happens on a day with an extremely cold upper atmospheric layer. The three times I have seen these it was actually not that cold near the ground. 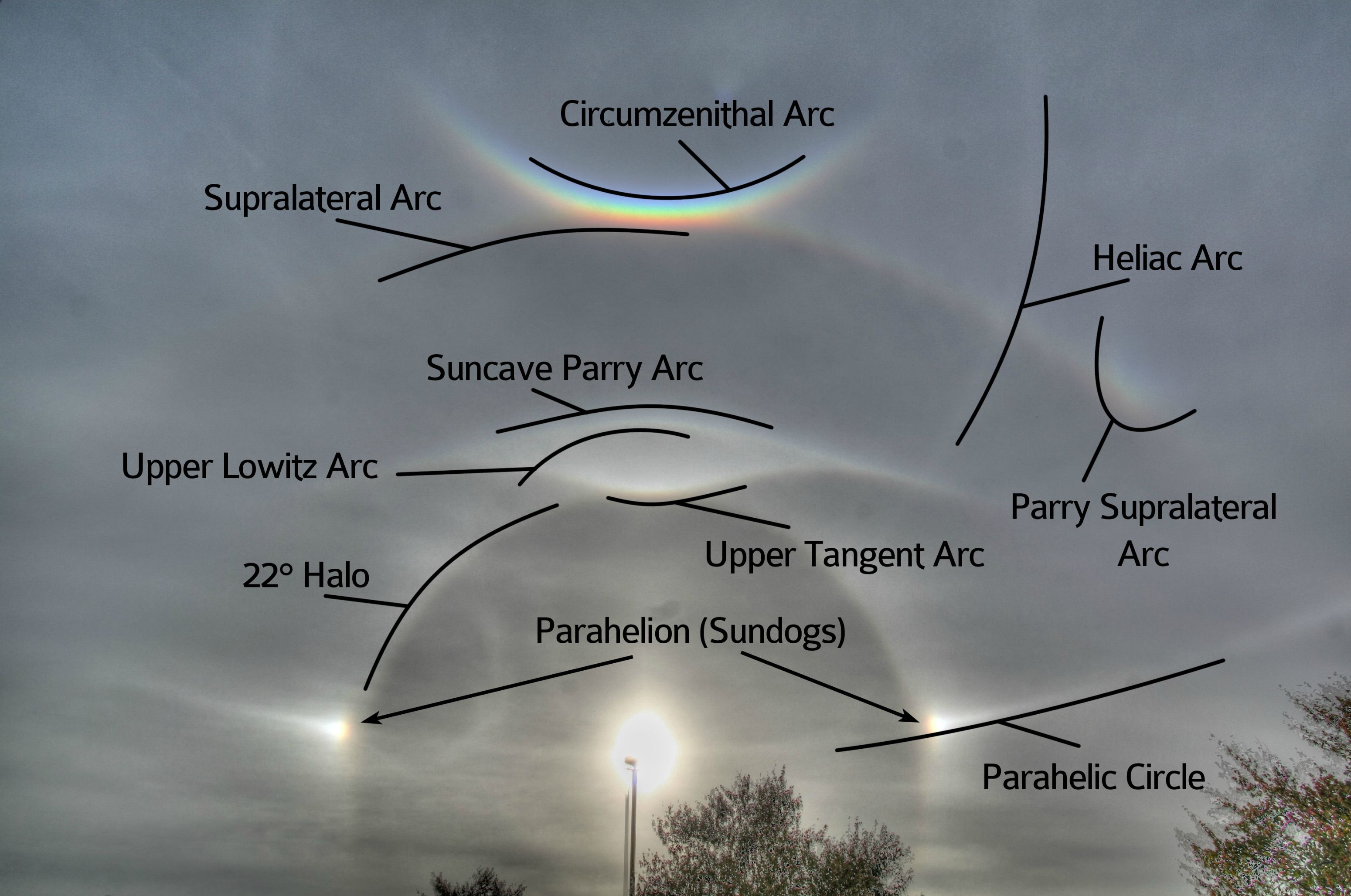 That will be a sun dog. I saw one last week. (The sun is over on the left in this picture.) 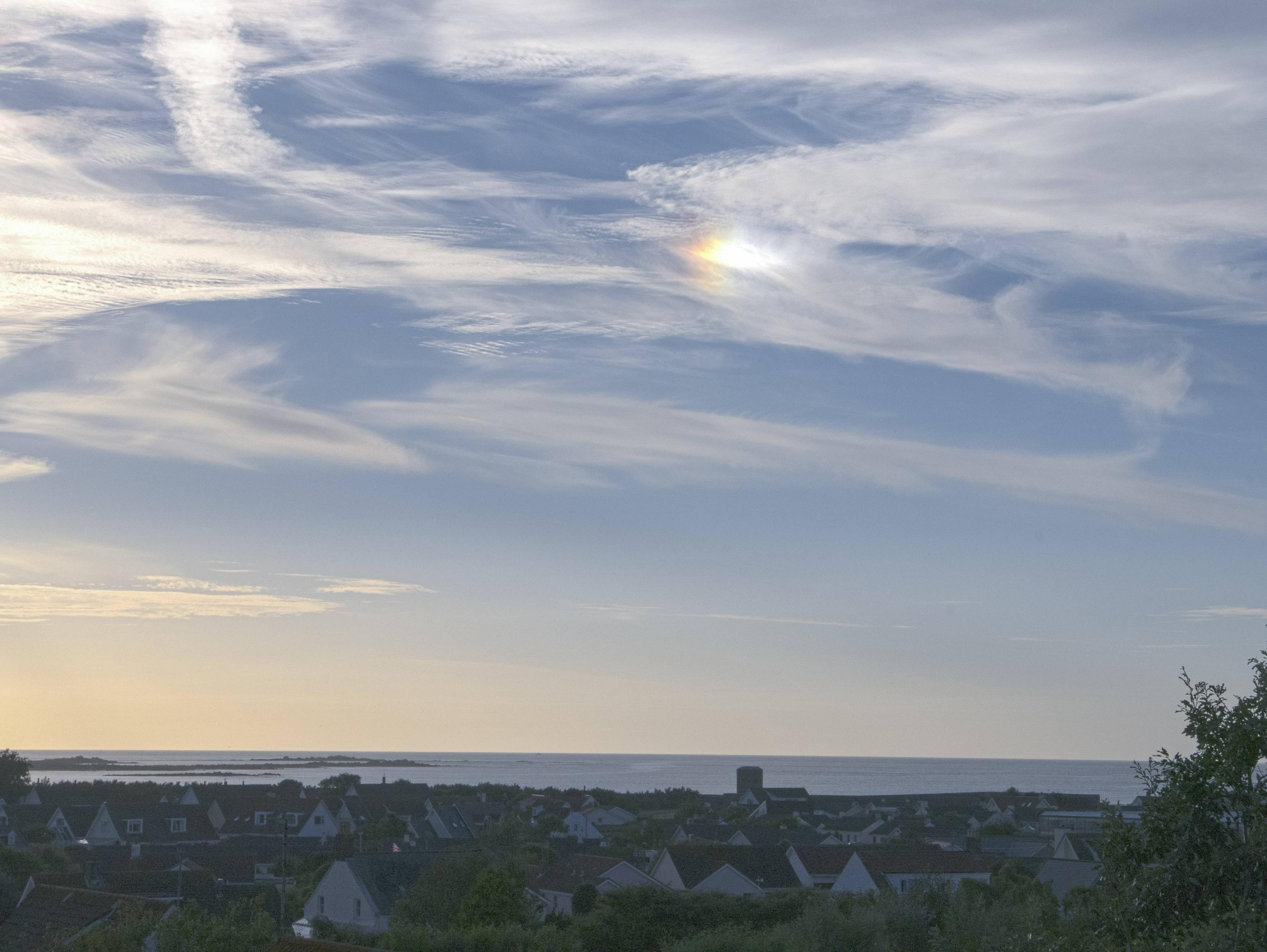 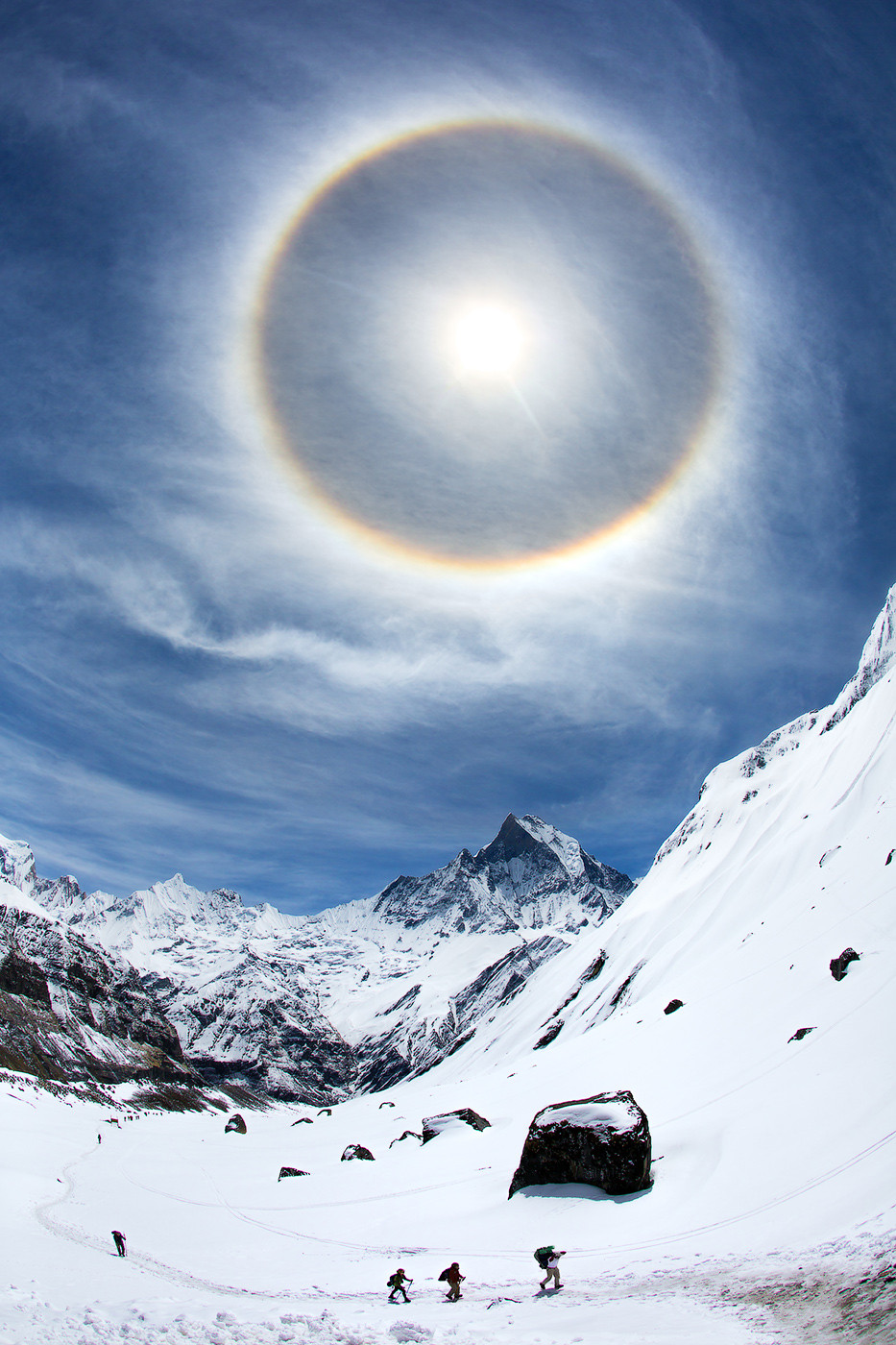 Halos are formed when the sunlight is reflected in ice crystals in the atmosphere, often present in the cirrus clouds that you mentioned.

Quoting from the Wikipedia page:

As light passes through the 60° apex angle of the hexagonal ice prisms it is deflected twice resulting in deviation angles ranging from 22° to 50°. The angle of minimum deviation is almost 22° (or more specifically 21.84° on average; 21.54° for red light and 22.37° for blue light). This wavelength-dependent variation in refraction causes the inner edge of the circle to be reddish while the outer edge is bluish.

Sun dogs are a related but different phenomenon. They are

two subtly colored patches of light to the left and right of the Sun, approximately 22° distant and at the same elevation above the horizon as the Sun

(from here). In fact, they are often accompanied by a 22° halo, but the two phenomena are independent and you can see one without the other.

4
Explanation for an unexpected rainbow

10
Purple doesn't occur in rainbow - or does it?
5
Shape of the rainbow
2
Odd order of colour fringes around cloud
5
Why is rainbow always circular?
6
Is there a zone where 'colour' overlaps between double rainbows?
1
Is the Sun disk always surrounded by a rainbow?
0
What was the rainbow like object I saw in ice crystals this morning?
1
Why does purple appear in a rainbow?
3
What is the explanation for this light during a rainbow?