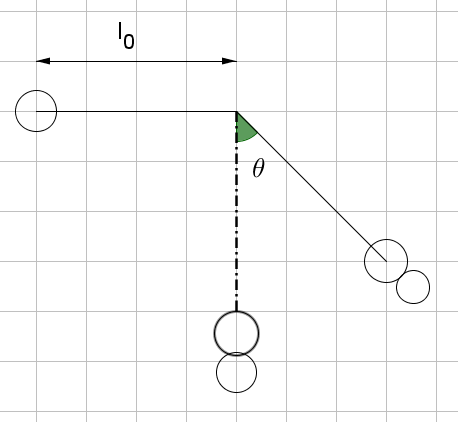 Let's say we release a bob of mass $m$ attached the ceiling through a wire of length $l_0$. Now at the bottommost point another identical bob of mass $m$ gets gently attached to the bob. Now we are required to find the angle upto which the system rises.

Why such contradiction exists between the answers? Can't the energy conservation law be applied here.

Update which I have found great difficulty writing.

Whether the joining is gentle or not because there are no external horizontal forces during the collision momentum conservation in the horizontal direction must apply.

The translational kinetic energy of the centre of mass of the two bobs has decreased by a half.

If the joining is done by a pin attached to one bob going into the other bob then one can say that work needs to be done to drive the pin into the bob and the result is that some bonds between atoms are permanently broken and the bobs get hotter.

Suppose instead that the two bobs, $A$ and $B$ were so clean that when they collided together they were joined together by cohesive forces.

So the moving bob $A$ hits the stationary bob $B$, the bonds between the two bobs deform and the centre of mass of the two bobs moves off at half the speed of the initial speed of bob $A$ as determined by momentum conservation.

There are two extremes:

1 As a result of the collision the bonds between the two bobs are permanently deformed and the work needed to do this comes from the kinetic energy that bob $A$ had initially.
The collision between the bobs is inelastic.

2 The collision between the two bobs is elastic which means that the compressed bonds act like compressed springs and are storing elastic potential energy and also exert forces on the two masses.

So in summary.
You have the centre of mass of the two bobs moving in an arc of a circle and the two bobs oscillating about their centre of mass with an energy associated with that oscillatory motion which is half the kinetic energy that bob $A$ had initially.

All this is rather abstract but the point I am trying to make is that the “missing” kinetic energy is not lost but it is no longer part of the translational kinetic energy of the two bob system.

In the real world the collision might well send (shock) waves within the bobs.
As time went on those waves would die down and as a result the bobs would have a higher temperature.

So by whatever mechanism you chose to join the two bobs together half of the initial kinetic energy that bob $A$ had would end up as heat, sound and work done permanently deforming the bobs.

Now use conservation of momentum to calculate the velocity(v2) just after the 2 masses stick together. It comes out to be sqrt(2gl0)/2.

Calculate the KE just before sticking. it come out to be (mgl0)

Calculate the KE just after sticking. it comes out be be (mgl0)/2.

But momentum is always conserved since you have neglected friction(with air). So your second method in which you first calculated the velocity using momentum conservation and then applied conservation of energy after the masses sticked together is correct.

What is the given answer? From what they consider the correct answer we can deduce what conditions they imagined. Did you draw the picture yourself, since it is not accurate. If the second bob is attached below, that lowers CoM and that has to be taken into account