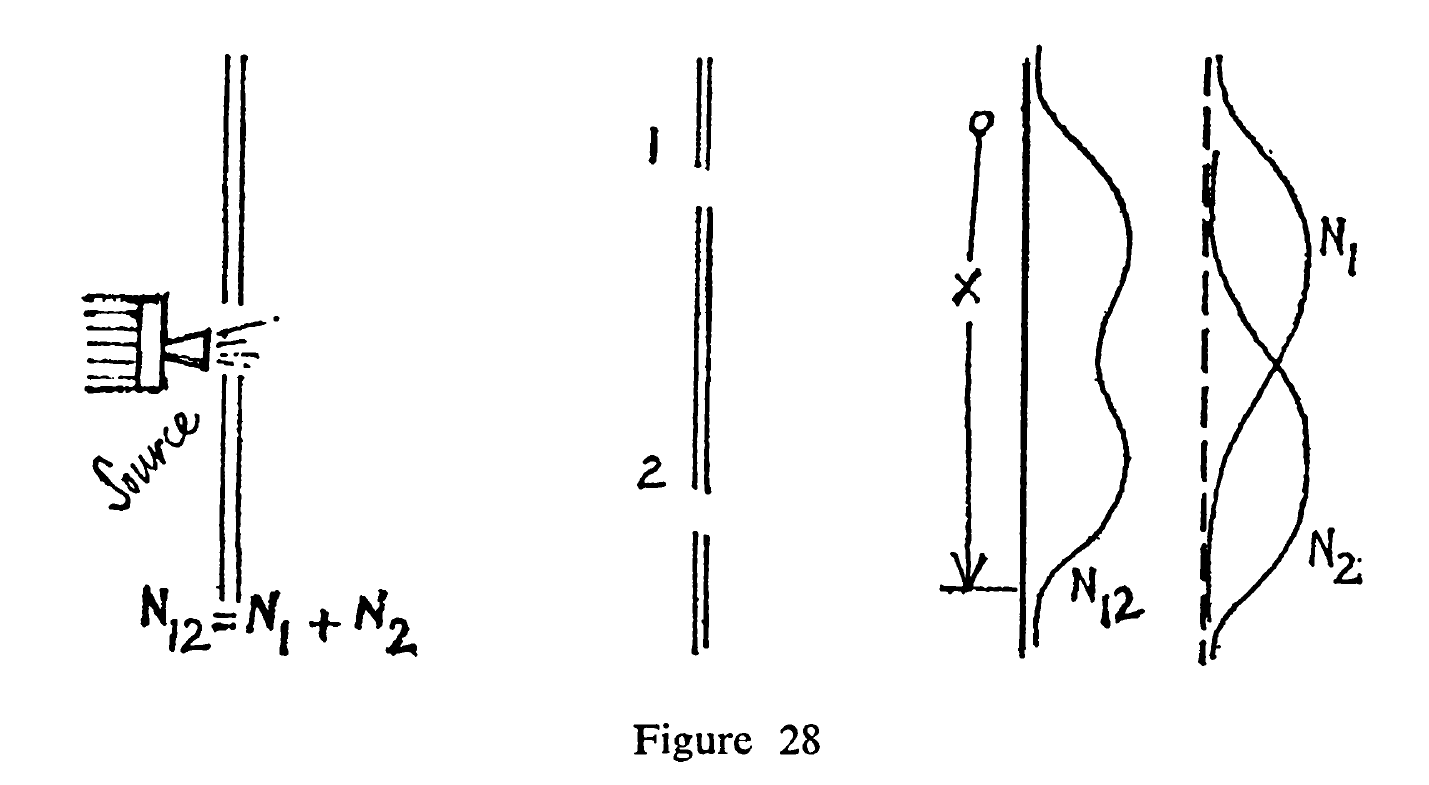 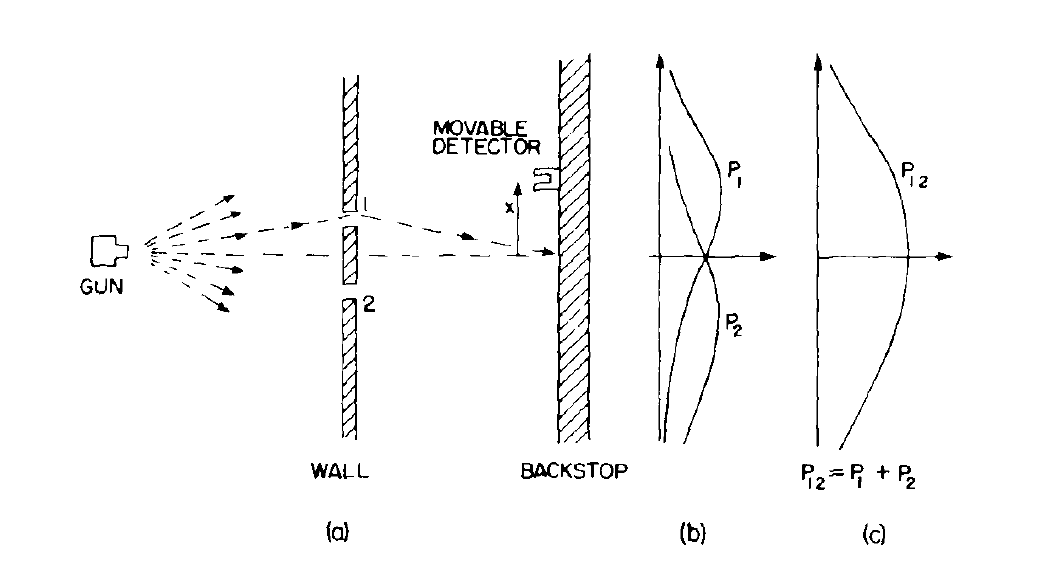 The First Picture is taken out from the Book The Character of Physical Law By Richard Feynman And the second picture is from his own The Feynman Lectures on Physics.

Both figures correspond to the An experiment with bullets topic which appear on his lecture.

I'm convinced to some measure of extent what the graph will look like in the individual cases, but not the both holes open case, because it is the sum of the other two(it concluded that $N_{12}=N_1+N_2$?). Please explain me the details of how it came.

And In the second picture, $P_1$ and $P_2$ are taken as the probability of finding the bullets in that place when hole no. $1$ is open, with no. $2$ closed and vice versa.

The sum of the graph is bulged out in the middle in case of two holes open. Also deducing that it is the sum of the probabilities when each hole is open ($P_{12}=P_1+P_2$?). I also don't understand how it adds together to give the probability of both holes open and the bulging out portion of the graph with respect to the slightly curved in portion in the previous graph in the book "The character of physical law".

From what I understood as given in the book The Feynman lectures on physics Chapter 1 "Quantum behaviour": By “probability” we mean the chance that the bullet will arrive at the detector, which we can measure by counting the number which arrive at the detector in a certain time and then taking the ratio of this number to the total number that hit the backstop during that time.

With this definition, I'll try to demonstrate an example where I don't understand how the probability adds in case of two holes open.

Let the source shoots bullet erratically in all directions but with a constant rate say $100$ bullets per hour.

Suppose, Hole $2$ is closed and Hole $1$ is open, Say, $20$ bullets has passed through hole No.$1$ and landed on the backstop (distributing the number of bullets). we are convinced to some level that most of the bullets will land just behind the hole. So, Let $B_1(x)$ be the number of bullets distributed over the backstop. Therefore ,probability of finding a bullet at distance $x$ in an hour is given by $\displaystyle{P_1(x)=\frac{B_1(x)}{20}}$,

Therefore If I am right, at the same time, when one hole is open and $20$ bullets is passing through the hole in one hour, the other hole which is blocked is blocking $20$ bullets which is inclined to pass through (without interfering the passed bullets) if it were open.

Feynman tries to explain why it is bulged out in the middle in his "Lectures on physics" but I didn't quite understand. So, i added an image of his book in his attempt to explain the argument.

Please help me on the parts I find doubt and confusion. I have listed all my doubts in the above section, and help me understand the transition from this classical mechanics problem to the contrast we will see in the quantum behavior and also continue my journey to experience the beauty of quantum mechanics which will only be possible if I understand this experiment. Thanks in advance.

EDIT 1/ 15thNov2016: I still am confused how this probabilities are calculated as Feynman defined it in the book. I hope someone could elaborately explain in the same manner as Feynman defined or maybe some other simpler manner perhaps so that I could understand how the probabilities are calculated in the sense as he defined in the book. Thank you

First, let me tell you what I think about your graphical question. The shape of the resulting curve depends on two things: first, the width of the slits, wider the slit wider the distribution and second, the distance between the two slits. When the slits are very far away you would see two distinct distributions but as you bring the slits closer they will slowly merge (see the attached animation and my hand drawing). So there is nothing wrong with the graphics. They just depict two different cases. 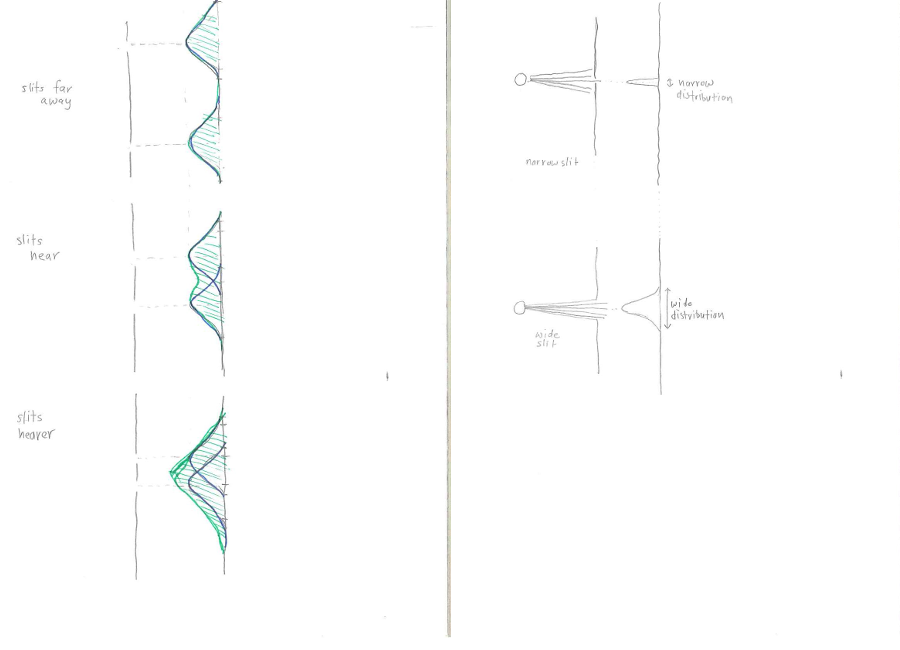 When it comes to your "mathematical" question, I think, you are right. Feynman did a small mistake there. Obviously, if probability is defined as Feynman did, one cannot have $P_1+P_2=P_{12}$, as you nicely demonstrated. One can simply perform an thought experiment with some numbers and see that it is wrong. I think, the correct way of thinking is to define the probability not as number of hits divided by number of bullets reached to backstop for a given time but rather number of hits divided by number of bullets coming out from the source for a given time. Then, one can write $P_1+P_2=P_{12}$.

Good luck with your journey with learning Quantum Mechanics.

The experiment can be viewed in different ways. To avoid confusion one needs to be very careful how one defines quantities. For instance if we define $P_1$ as the probability distribution for the bullets hitting the backstop with only hole 1 open, then one needs to say how this probability distribution is calculate. I think the way Feynman defined the probability includes those bullets that did not manage to pass through the hole. Therefore if we integrate the distribution $P_1$ the result would be much smaller than one. A similar small result would be obtained for $P_2$. In that case one can then understand why one would have $P_{12}=P_1 + P_2$. The probability for a bullet to pass through with both holes open would be twice the probability with only one of the two holes open.

Not the answer you're looking for? Browse other questions tagged quantum-mechanics classical-mechanics double-slit-experiment probability interference or ask your own question.

1
Why maximum probability (with bullets) at x=0 in double-slit experiment (Feynman's textbook)?
0
Problems in understanding Feynman's concept "Probability of bullets hitting on the backstop"

2
What is the relationship between distinguishability and probability in Quantum mechanics?
3
A question on intereference experiment with water waves as given in the Feynman Lectures on Physics
1
What is the logic behind the thinking that electron must take a complicated path through the two slits?
0
Problems in understanding Feynman's concept "Probability of bullets hitting on the backstop"
3
Why does light show a no interference result?
2
What happens to the uncertainty principle if
0
Probability density in double slit experiment
0
Feynman’s electron double slit experiment?
3
Feynman's non-rigid double slit experiment
0
How is there a 100% chance of finding a hole in the conduction band?