Do two airplane engines, rotating in opposite directions, cancel out their angular momentum?

A contra-rotating propeller has two sets of blades rotating in opposite directions, but on the same axis. I think I remember reading somewhere (correct me if I'm wrong) that the angular momentum of this arrangement is zero because it cancels itself out.

Do their angular momentums cancel out? Why or why not? It seems odd to me that it might depend on where the axis is even though their rotation behavior and angular moment are the same.

This question arose from a related one on aviation.stackexchange after I got curious if gyroscopic forces were significantly restricting yaw and pitch, especially for takeoff pitch-up. Basically I want to know if two engines experience twice as much gyroscopic forces, or if they cancel out.

Any manufacturer of twin engined aircraft will, as a matter of course, ensure that the props rotate in opposition to each other, especially with powerful tuboprops.

Otherwise, as you imply, the torque and subsequent yaw in say, the left direction, would not make life easy for the pilot, especially in strong crosswinds, or rudder failure or (God/Allah/Yahweh/Buddha....) forbid, both crosswinds and rudder problems occurred at the same time.....

In relation to this, a short example: During the 2nd World War, American P51 aircraft, with a very powerful single engine, were able to turn extremely quickly in one direction, (the same direction as the prop rotation) and utilise this angular momentum to great advantage in tactical manoeuvres.

An illustration of a different method of mounting the engines, and avoiding torque induced yaw, is shown below: 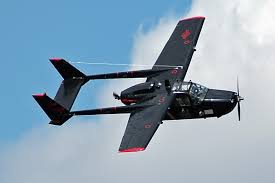 The Skymaster handles differently from a conventional twin-engine aircraft, primarily in that if an engine fails, the plane will not yaw toward that engine. Without the issue of differential thrust inherent to conventional (engine-on-wing) twins, engine failure on takeoff will not produce yaw from the runway heading. With no one-engine-outminimum controllable speed (Vmc), in-flight control at any flying speed with an engine inoperative is not as critical as it is with engines on the wing with the associated leverage; however, performance in speed and, particularly, rate of climb are affected.

Not the answer you're looking for? Browse other questions tagged angular-momentum rotational-dynamics gyroscopes or ask your own question.

1
Calculation for force generated by a rotating rectangular blade
7
Heat engines and “Angular momentum” engines?
0
Angular momentum of two rotating spheres
0
How do i calculate the linear acceleration of a body with 2 opposite torques on it?
1
How does smartphone VR really work?
1
Work done by constraints on rotating rigid bodies
0
Do Engines Contradict Conservation of Angular Momentum?
0
Calculating Reactive Gyroscopic Couple and its Relationship with the Attitude of a Rigid Body