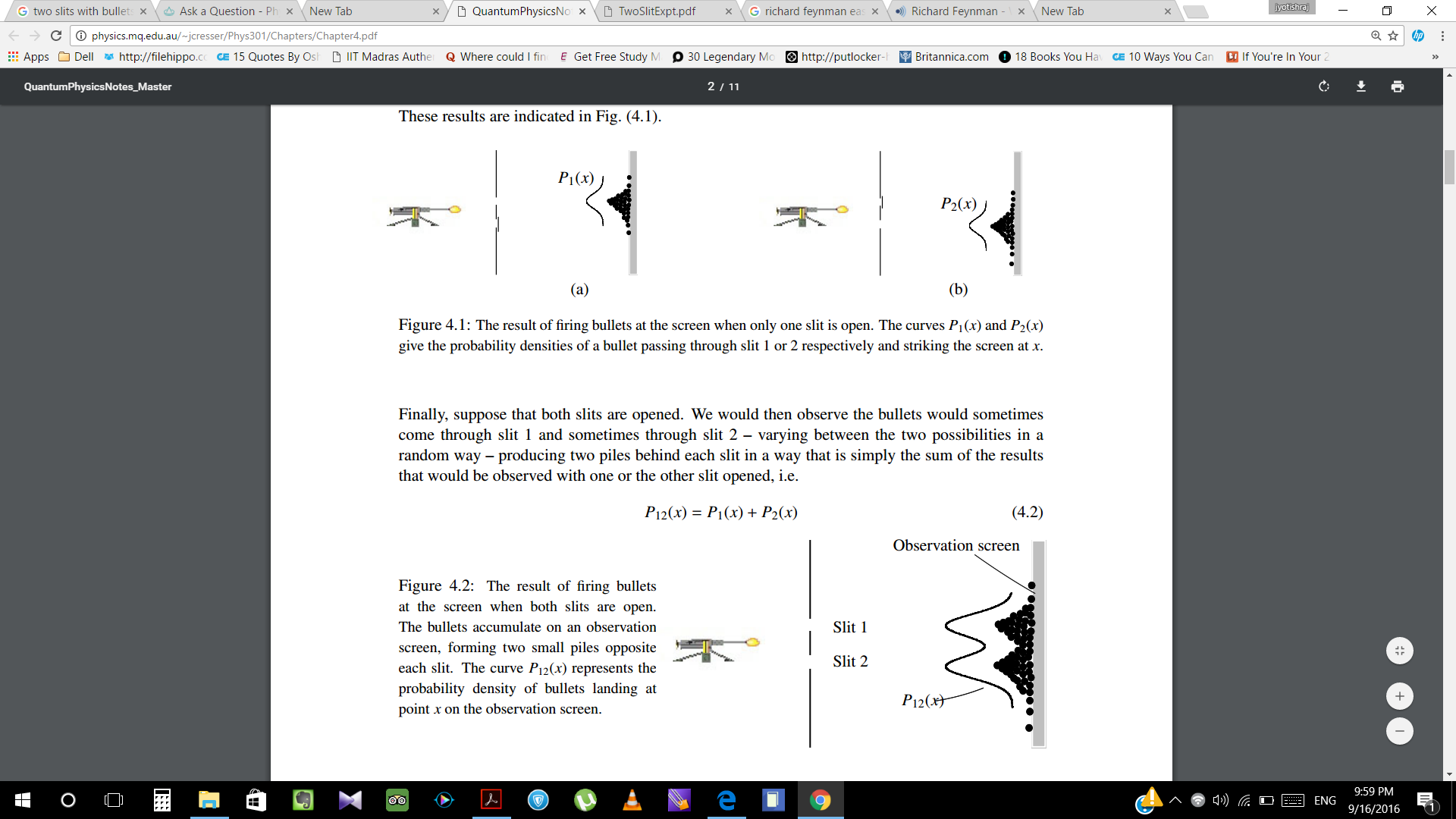 How come the probability functions add together?

I am able to understand Feynman's explanation but not the part where we add together probabilities. In his lecture of physics Vol III, he states that "By "probability" we mean the chance that the bullet will arrive at the detector in a certain time and then taking the ratio of this number to the total number that hit the backstop during that time."

His definition is clear and true but my question is if we open both the holes we will surely get twice the amount of bullets in the backstop so, the sample space of the probability is increased where the amount of bullets received at any point on the backstop will remain more or less equal, which defies the statement that the probabilities will add up when we open the holes individually. That's how I understand. Please help me where I'm wrong, I'll appreciate it very much.

I hope you'll guide me to the path of understanding this. For reference to Feynman's argument on "An experiment with bullets" can be found here http://www.feynmanlectures.caltech.edu/III_01.html

This has been bugging me for the last two days. Please help

I hope I understand your question correctly. If not, please give some more information. I think that you are wrong when you say

If the $d$ is large, there will be no overlap between the two distributions. But if $d$ is small they will overlap, meaning for example that in order to calculate the probability that a bullet falls right behind the hole $A$ you will have to consider not only the (large) chance that this has happened as a consequence of the bullet passing through the hole $A$, but also the (small) chance that the bullet has gone through $B$, deviated and landed behind $A$. This is why you need to sum the probabilities.

You seem to be concerned about doubling the size of your sample space (i.e. the number of fired bullets). First of all, you don't need to double it. You can do the first experiment with $1000$ bullets and the second with $500$ bullets for each hole, as long as the number of bullets for each hole is large. Anyway, the size of the sample space only affects how you normalize your probability distribution: if you double it you will need to divide your total probability distribution function by an extra factor of two in order to have the correct normalization. This means that the height of the distribution at each point will be halved. But when you sum up two different distributions for the holes $A$ and $B$ you do not double the height of the distribution for the hole $A$ alone at each point. Thus the effect of adding the distributions is not compensated by dividing everything by two.

I think that you are very confused about the purpose of the experiment. The experiment is not about finding out how many bullets pass through the hole and how many do not. In fact, you don't care at all about the bullets that do not make it through. You only care about the bullets that passed through the hole, and their total number is relevant only to the purpose of normalizing the probability distribution.

What you want to know with this experiment is where on the backstop the bullets will land. Since the holes are small, there is the chance that some of the bullets will be deviated while passing through, landing on a spot which is not exactly behind the hole but a bit shifted on the left or right. Therefore when you build the probability distribution by counting the number of bullets landed on each spot you will find that it is peaked in the region behind the hole (or it has two peaks in the regions behind the two holes if there are two holes), but it has a nonzero value also a bit further away from this peak.

If you increase the amount of bullets you fire, they will still land on the backstop with the same distribution, and so nothing changes. But if you open a new hole and fire through it, a new distribution peaked right behind it will appear, and will overlap with the other distribution which is different since the holes are in two different places.

If you understand this, read again carefully my answer and look at the pictures in Feynman's book you will probably realize what your confusion was about.

Not the answer you're looking for? Browse other questions tagged quantum-mechanics classical-mechanics double-slit-experiment or ask your own question.

12
Why do some materials reflect (metals) and other materials reflect and refract (glass) from the quantum perspective?
0
Understanding "Propagation in a Crystal Lattice": What is the difference between 'amplitude leakage' & 'probability leakage'?
4
Problem in understanding the concept of 'superposition' as explained by Dirac
2
Double Slit Experiment/Transition of Classical to Quantum problems in Probability Addition in "An Experiment on bullets"
2
Fundamental problems with the understanding of probability currents
2
Applying Feynman rules for calculating quantum amplitudes and probabilities in correct manner
1
Why maximum probability (with bullets) at x=0 in double-slit experiment (Feynman's textbook)?
1
Relativity and Quantum Mechanics
2
What happens to the uncertainty principle if
0
A question about Feynman's 'Little Arrows' approach in "QED: The Strange Theory of Light and Matter"