How far are we from reaching around $10^{16}~\rm GeV$ collisions experimentally?

I understand this is a highly speculative question, so I'm not expecting final words, but rather insights to deepen my notion on the issue. I know we reached about 209GeV at LEP in the end of 2000, and that the LHC is currently working at 13TeV. So what are the chances we'll see a collider testing our actual GU theories in the next few decades? What does it depend on?

Rather than try to predict future technological developments, maybe it will be helpful to take a bird's eye view at what history so far has to say. Here is a summary of the highest center-of-mass energy achievable over time over the modern era: 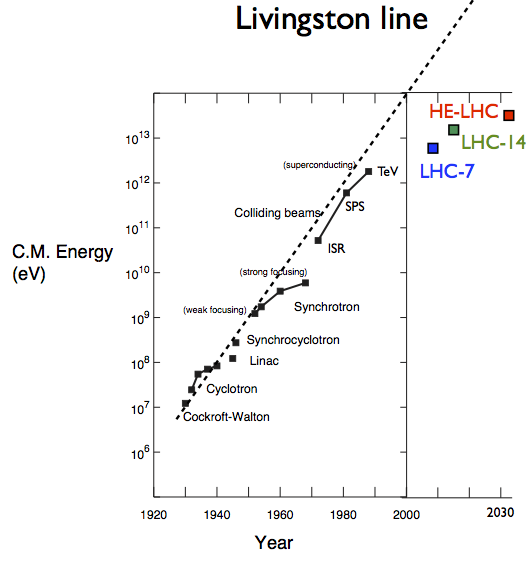 As the title suggests, this sort of plot is called a Livingston plot, and it is analogous to Moore's law in integrated circuits. This plot comes from Jim Rohlf and a nice post at the blog Quantum Diaries.

After an initial period of exponential growth it looks like since the last half of the 20th century the trend has become decidedly subexponential. But let's ignore that at first. Given that we rose from $10^7$ to $10^{13}$ eV over 100 years, extrapolating that to $10^{25}$ eV would suggest we have somewhere in the neighborhood of 200 years to go.

But that should probably regarded as an laughably optimistic starting point. There is no real reason to expect that it will be possible to have our maximum energy increase exponentially indefinitely, and plenty of reasons to think it won't, starting with the empirical fact that we are already seeing this. Depending on how you extrapolate this trend you could probably argue for almost any timescale up to "never"- the trend just isn't well enough constrained.

The one thing that is safe to say is that we are terribly far away, with many completely unknown steps required. It is like if Charles Babbage were to write out a timeline to the smartphone, or the Wright brothers tried to predict interstellar exploration. On the bright side, perhaps we can hope to learn something about this regime before we can access it ourselves by observing rare high-energy astrophysical events, which can get at least up to $10^{20}$ eV.

36
How far away are we from probing Planck scale physics directly?

3
What is jet quenching and how far can the hydrodynamic analogy go?
4
How are quarks and leptons detected experimentally?
2
How many pairs of nuclei collide in heavy ion collisions?
2
How are the protons for collisions in the LHC made?
1
How are the standard model and the Higgs boson actually confirmed experimentally in practice?
21
What news about the second Higgs mode (or the mysterious particle) is anticipated to be seen at LHC around 750 GeV?
0
How do you experimentally constrain momentum?
36
How far away are we from probing Planck scale physics directly?
2
How are particles in a collision chosen?
0
How far apart are neutrinos at rest?