I can not find a good explanation on how the subjective speckle pattern is formed (in terms of interference).

Objective speckle. The image below explains well how the speckle is formed: the light from each point on the illuminated surface adds constructively/destructively to form a single speckle. The phases in yellow help a lot in understanding how this happens. 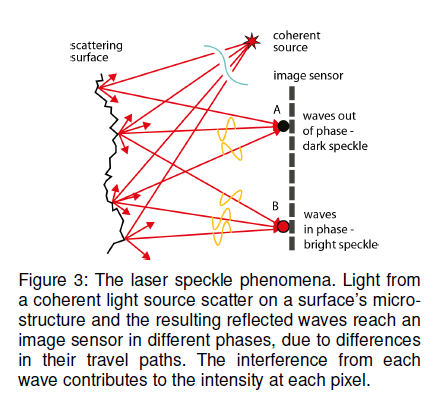 Subjective speckle. It is clear that the speckle pattern is imaged on the detector using a lens. Each point in the image can be considered to be illuminated by a finite area in the object. The size of this area is determined by the diffraction-limited resolution of the lens which is given by the Airy disk (taken from here). Subjective patterns are caused by the interference of waves from the various scattering regions of a resolution element of the lens. In this region, the response functions of the randomly de-phased waves are added, resulting in the formation of speckle patterns (taken from here).

What exactly happens in that "finite" area? Is it the same as a resolution element? Which rays interfere? How is this even possible if all the rays travel the same distance from the object point to the image point? Aren't they all in phase? What causes randomly de-phased waves?

Say the v is smaller than u, i.e. the Airy disc A is smaller than A'. The wavefronts that interfere in A' must, therefore, origin from the surrounding area of A. Different wavefronts with different phases result in a different intensity. Because the resulting pattern is depending on the imaging system, it is called subjective.

Moreover, the Airy disc depends also on the aperature (or the lens diameter) the subjective pattern also changes when changing the aperature.

Objective and subjective speckle patterns have a lot in common. In both cases, a plane wave undergoes a random phase change at plane A, and is then imaged at another plane B. Planes A and B are far enough apart so that Fourier optics applies.

It's possible to have a more complicated setup - plane wave reflects off a rough surface A, then passes through a rough lens B, and then is imaged at plane C. In this case we would have both objective and subjective speckles.

I've got a different take on this. I'm very near sighted, and I notice that the speckle pattern around the light dot from a cheap 650 nm laser doesn't really change in sharpness even if I'm looking at it from many feet away without glasses where I cannot actually see such detail.

If the pattern is caused by interference, then the interference must be happening in my eye. But I don't think that's what's happening. There are three types of cone cells (the color sensitive photoreceptors) in our eyes. Only one type is sensitive to 650 nm light. This is what the distribution of those red-sensitive cells looks like:

Since the 650 nm light only triggers the red receptors, I think what I'm really seeing is the distribution of those receptors. To help verify this, I checked if my camera captures the speckling. It does not, even though it can capture other patterns that aren't from laser light and are just as fine, because it uses a different method of distinguishing colors.

Not the answer you're looking for? Browse other questions tagged laser interference interferometry or ask your own question.

1
Newton's Ring Experiment
2
When deriving $d\sin\theta=n\lambda$ are the light rays approximately parallel or actually parallel?
1
Why does collimated light form an airy disk pattern on a camera sensor?
2
What kind of light coherence is required for an image
0
Fabry-Perot Interferometer
2
How are phased arrays compatible with the photon concept?
0
How can reflected light be visible if for every trough of a light wave, there is also a simultaneously arriving peak?