Conservation of angular momentum in helicopter

I have a small RC-controlled toy helicopter with removable tail rotor.

Suppose I remove the tail rotor, hold the tail with my hand, start the rotor until it moves with constant angular velocity and then let it go. Suppose that the heli remains on the floor all the time.

Then the body of the helicopter begins to turn into the opposite direction of the rotor.

My problem is to explain this in terms of angular momentum. At first this seemed to contradict angular momentum conservation because I assumed that the helicopter is a closed system and there is no external torque, but the rotor keeps the same angular velocity while the body starts to turn into the other direction.

My second thought was that I have to take the air into account. If I do that it seems plausible to me to explain it as follows:

But then I thought, the body should turn faster and faster to infinity which obviously doesn't happen. So I guessed I should also take the friction with the floor into account where the angular momentum of the body is transferred to.

This leads me to the following three questions:

So it would be great if someone could clarify this in terms of angular momentum.

Since the same problem should occur in real helicopters, I guess that there should be some detailed literature about it's physics, but I didn't find any resources about this. So if you have any references for more details or further reading on this problem, it would be also great if you could post it.

The air is of course the key to understand your questions. To start with the last question, as you figured out right yourself, in vacuum body of the helicopter would not turn at all. But in vacuum helicopter could not fly at all! 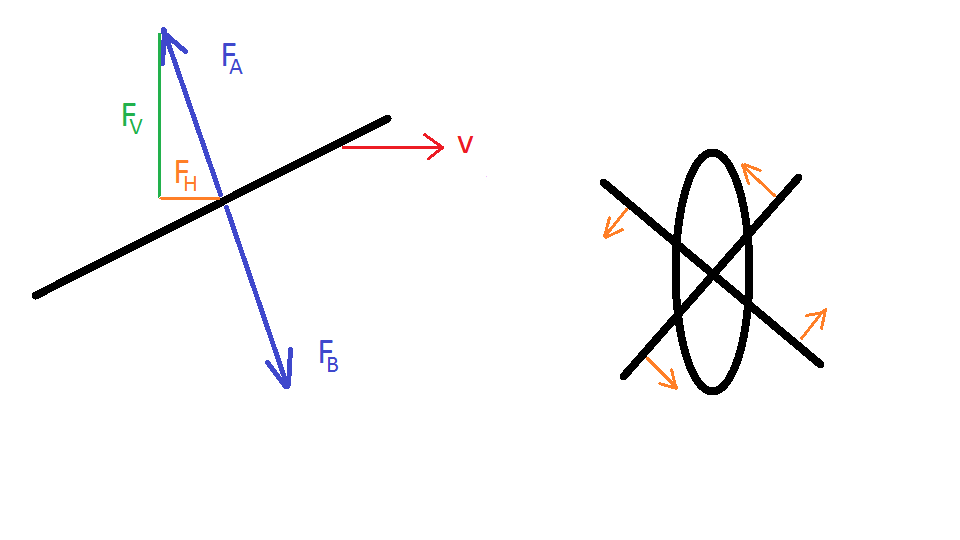 At least part of the principle of rotor is that by pushing air down makes helicopter airborne. However in order to do that, blades of the rotor are a bit inclined, so when blade hits air right with velocity $\vec{v}$, it pushes air mostly down and but also to right with force $\vec{F}_\text{B}$. Third Newton law tells us that in that case air pushes blade mostly up, but also to left with force $\vec{F}_\text{A}$.

The toy is simply a rotor and a body with a motor that induces torque in opposing directions on these two parts. Remember Newton's laws, for every action, there is an equal and opposite reaction; in this case, the motor doesn't care whether it's pushing the rotor in one direction or the body in the other, it just applies the torque. Similarly, the floor induces torque on the body in the opposite direction as the engine because of the frictive forces restricting motion; the same is true of the air though it offers less resistence. It is incorrect to consider the helicoptor a closed system because of it's interaction with the environment.

Not the answer you're looking for? Browse other questions tagged classical-mechanics angular-momentum friction home-experiment applied-physics or ask your own question.