Why does this planet (J1407 b) and Saturn's ring center on its equator? [duplicate]

Why is the material in J1407 b's or Saturn's rings stay in a disk not scattered? Is it the gravity and/or magnetic field that causes this? Does it differ with other large bodies that might not have a electromagnetic field? 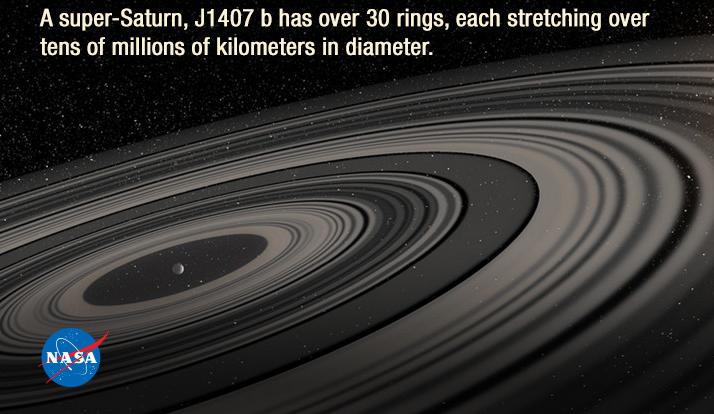 Saturn's rings are rather interesting. From what I've read, the different layers of dust and rocks have been formed over millions of years, by a phenomenon known as orbital resonance. Orbital resonance is something like an increased(or decreased) gravitational effect due to 2 bodies moving with certain time periods. This effect causes stability in some cases, and instability in others. When there is instability, there is an effect known as 'clearing the neighbourhood' , in which the unstable objects undergoing orbital resonance, are flung out of their current orbit, unless they find a more stable one. That's how the rings arranged themselves in bands, and are not continuous.

Correction: clearing the neighbourhood is not the name used in this case. It is used for the removal of unstable orbits in larger systems like the solar system.

The reason it's a disk and not spread out is actually simpler than you might imagine.

Consider all of the mass in the system as a whole. It will have a certain centre of mass, angular momentum, etc, which much be conserved no matter how the distribution changes. That defines a preferred axis of rotation, and perpendicular to it, a plane that is the natural direction for a ring.

Now consider any mass that is not, initially, in that plane. Say a rock that is travelling around the centre of mass "top to bottom", in what would be a polar orbit around a planet. By definition, there is some other mass with the opposite direction on average. So if you wait a couple of hundred million years, the objects that were orbiting top-to-bottom will eventually meet one travelling bottom-to-top, their non-plane momentum will be cancelled out, and any remaining momentum will be in the plane.

That gets you something like a disk. After that other issues come into play that can shepherd or randomize the distribution. In the case of a ring around a large planet, like Saturn, the equatorial bulge helps out.

It is entirely possible to construct rings that don't spin the same way as the planet, but they will tend to scatter. There has been some work on using such a system, with artificial shepherds, as a way to build a skyhook.

Not the answer you're looking for? Browse other questions tagged newtonian-gravity angular-momentum orbital-motion conservation-laws planets or ask your own question.

94
If Earth had rings?
62
Why does everything spin?
49
Why are our planets in the solar system all on the same disc/plane/layer?
23
Why are Saturn's rings so thin?

20
Why Aren't Saturn's Rings Clumping into Moons?
9
Ring height stats?
7
What causes matter to initially rotate/spin/orbit?
4
What is the reasoning behind the Hill Sphere?
6
Protoplanetary disks, angular momentum and prograde orbits
0
Superposition of accelerations in multibody problem
2
Eventual Formation of Space Junk Disc