Why shadow of light that goes through colored glass becomes colored?

The way I understand us seeing colors: for non transparent objects, light of specific wavelength (that matches the color) bounces off object (the rest is absorbed by object) and hits cones in our eye, then based on combination of cones activated (RGB) we perceive color.

For transparent things light does not get absorbed but goes through the object (nothing gets reflected, nothing hits retina) and we see through it.

For colored transparent objects all but that specific wavelength goes through, specific color gets reflected, all others go through.

Now obviously I must be making a mistake somewhere in the above...

For illustration consider the image bellow: 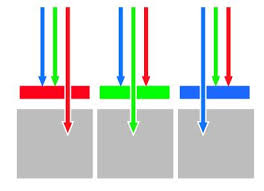 The first filter looks red($\lambda = 700nm$) because all other wavelengths are absorbed and only red is able to go through it or get reflected, Same can be observed with the rest of the filters.

For colored transparent objects all but that specific wavelength goes through, specific color gets reflected, all others go through.

Instead, it must be the case that they absorb all colors but one (just like a regular colored object), and that one color they partially transmit and partially reflect. (Of course they might absorb some of that color light too.) This explanation explains why you can't see perfectly through a colored translucent object (because some of the light is being reflected rather than transmitted), and also why the shadow is the same color (because the same color is the one being transmitted.)

Kosta Butbaia's answer is on the right track, but he missed the fact that quite of bit of the one color of light gets reflected as well as transmitted. His diagram suggests that if you and the light source were on the same side of the translucent object, it would appear completely black, which isn't the case for most colored transparent objects - they usually look more or less the same color on both sides, no matter where the light source is.

13
Seeing colors: photons vs waves
8
Why does a glass window reflect white objects white from an atomic scatterers’ viewpoint?
8
Why does glass absorb infrared light?
2
What is the actual mechanism behind the reflection of various colored light by material of different color?
4
Can shadow of light that goes through transparent colored material be of different color than the color of the material it goes through?
0
Why is "Visible Light" in the middle of the spectrum and not at an end?
1
Understanding the color of fluorescent and non-fluorescent objects
2
How can pigments create more combinations of color than present in the initial light?
9
If we use yellow light on a blue paper, what will the paper look like?