My textbook gives the thermal resistivity of a slab of a material having lateral thickness $L$, area of face $A$, and thermal conductivity $K$ by

Using this formula, the formula for the rate of heat transfer ($Q/t$) b/w two ends of the same slab having temperature difference ∆$T$ is given as:

This formula resembles Ohm's law in the sense that $Q/t$ gives the "current" $i$, ∆$T$ gives the potential difference in terms of heat and $R$ gives the resistance. My textbook has then stated that

"Hence, results derived from Ohm's law are valid for thermal conduction also. For a slab at steady state, we have seen that the thermal current $i$ remains same at each cross-section. This is analogous to Kirchhoff's current law for electricity, which can now very conveniently be applied to thermal conductivity."

In an example problem following this, it is asked to find the temperature of a junction b/w 3 rods made of different materials, whose ends are maintained at different temperatures. The following diagram has been provided as a hint: 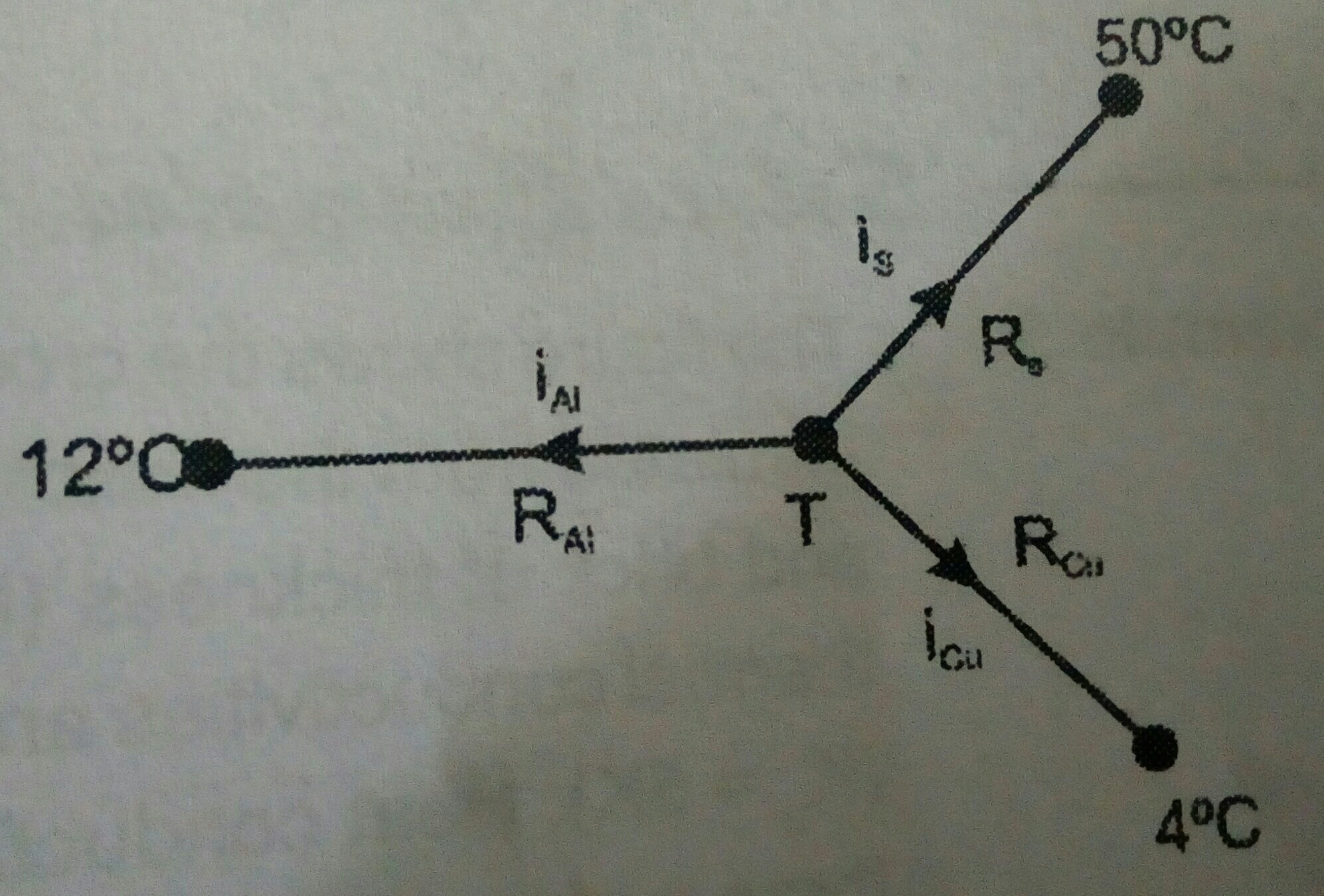 My doubts are these; firstly, is the equation given for thermal resistivity correct? The formula that I find on other websites and my copy of Halliday and Resnick is the following:

Secondly, why do the currents in the figure all add up to zero?(As given in the solutions)? I am very confused about this analogous law.

Please do share your insights for it would be tremendously helpful for me. MUCH thanks in advance :) Regards.

Principle of the analogy

Thermal conductance, $\displaystyle{\frac{KA}{L}}$, is the amount of heat that passes through a slab of area ($A$) and thickness ($L$) in unit time, when the opposite faces of the surface differ in tmperature by $1K$. It's reciprocal is the thermal resistance $R_T$,

Hence, the rate of heat transfer from one face to the other is given by:

which follows from the definition of thermal conductance, when the opposite faces are having a difference in temperature by $\Delta T$. From equation $(1)$, we have

Let, the heat current (amount of heat transferred in unit time) be denoted by $I_H$. Hence

Now, comparing this equation with the Ohm's law, we have the electric current, which is the amount of charge flowing per second

Just as like a voltage (or more precisely, potential difference) makes a current flow through a metallic conductor, the temperature difference between the two ends of a metallic rod makes the heat flow to happen from a point of higher temperature to that of lower temperature. This makes sense. Hence this analogy is useful.

Hence it can be extended to Kirchhoff's law in electricity also, as the only difference in the two cases are that in one heat is the energy transferred, while in the other, electrical energy is being transferred.

How to work out the problem using this analogy?

One of the ends of the three rods start from a common point, say a heat source maintained at a constant temperature $T$. The direction of current flow states that $T$ is the high temperature region.

First, use the principle that at the junction $T$,

Now, knowing the resistances, we can calculate $T$.

3
Why does a larger thermal conductivity provide a smaller temperature gradient?
10
Thermal energy vs. internal energy?
3
Fourier's law and time taken for heat transfer?
0
An Expression for $\Delta T$ for a Thermal Conductivity derivation
2
Transient heat conductivity with variable heat flux in 1D
0
Why can't I equate thermal current at the point?