Would massive amounts of electrons accumulate on the surface of neutron stars?

Given a neutron star, begin throwing an unlimited amount of electrons at it one at a time. Over time, what happens to the balance of gravity against the accumulating repulsive negative charge?

What happens to the surface structure of the star?

Does any major change occur before the added mass causes a collapse?

In particular, how would the electron crust affect things, and what effect the magnetic field would have, would it effectively repel the electrons?

Or would radiation from a hot neutron star be intense enough to act to push the electrons back out?

It's a neutron star, so if electrons fall in, AFAIK , there is no electrostatic repulsive force. Allowing gravity to pull them in one at a time will probably mean that the electrons will get caught up in the magnetic field of the neutron star.

Although Wikipedia says there is no overall net charge, I do wonder how that applies to the outer crust, composed of ions and electrons?

Neutron stars are very hot and typically have a surface temperature around $6 ×10^5 K$. They are so dense that a normal-sized matchbox containing neutron-star material would have a mass of approximately 13 million tonnes, or a 2.5 million $m^3$ chunk of the Earth. The density of the star is comparable to that of the nucleus of an atom. They have strong magnetic fields, between $10^8$ and $10^{15}$ times that of Earth's. The gravitational field at the neutron star's surface is about $2 ×10^{11}$ times that of the Earth's. 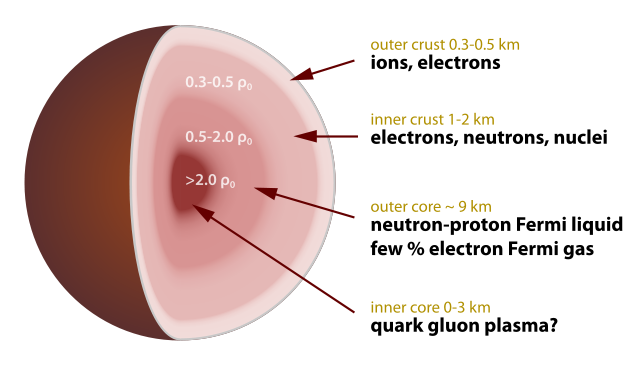 Neutron stars have strong magnetic fields. The magnetic field strength on the surface of neutron stars have been estimated at least to have the range of $10^8$ to $10^{15}$ gauss ($10^4$ to $10^{11}$ tesla). In comparison, the magnitude at Earth's surface ranges from 25 to 65 microteslas (0.25 to 0.65 gauss), making the field at least $10^8$ times as strong as that of Earth. Variations in magnetic field strengths are most likely the main factor that allows different types of neutron stars to be distinguished by their spectra, and explains the periodicity of pulsars. The neutron stars known as magnetars have the strongest magnetic fields, in the range of $10^8$ to $10^{11}$ tesla, and have become the widely accepted hypothesis for neutron star types soft gamma repeaters (SGRs) and anomalous X-ray pulsars (AXPs).

Not the answer you're looking for? Browse other questions tagged electrons radiation neutron-stars or ask your own question.

57
How come neutrons in a nucleus don't decay?
20
Are Neutron stars transparent?
1
What happens to atoms in extremely strong electromagnetic fields?
0
Qualitative picture or reference for a Lemaître's Cold Big Bang theory
35
Can a balloon be inflated with electrons?
6
Neutron stars - only neutrons?
2
What happens when a neutron star loses enough mass to go under Chandrasekhar limit?
4
How common are neutron stars?
1
Could an electron enter the nucleus, and if so would it be captured by a proton?