I don't understand why velocity of the flow at that point is 0. The molecules are hitting the surface as they encounter it with some V(final). If the velocity of molecules is suddenly 0, they wouldn't they just start piling up at the surface?

I don't understand why the values are the way they are. My professor couldn't really explain why. It was more like "believe me" :)

The flow is incompressible by the way!

Here's the picture for better visualization: 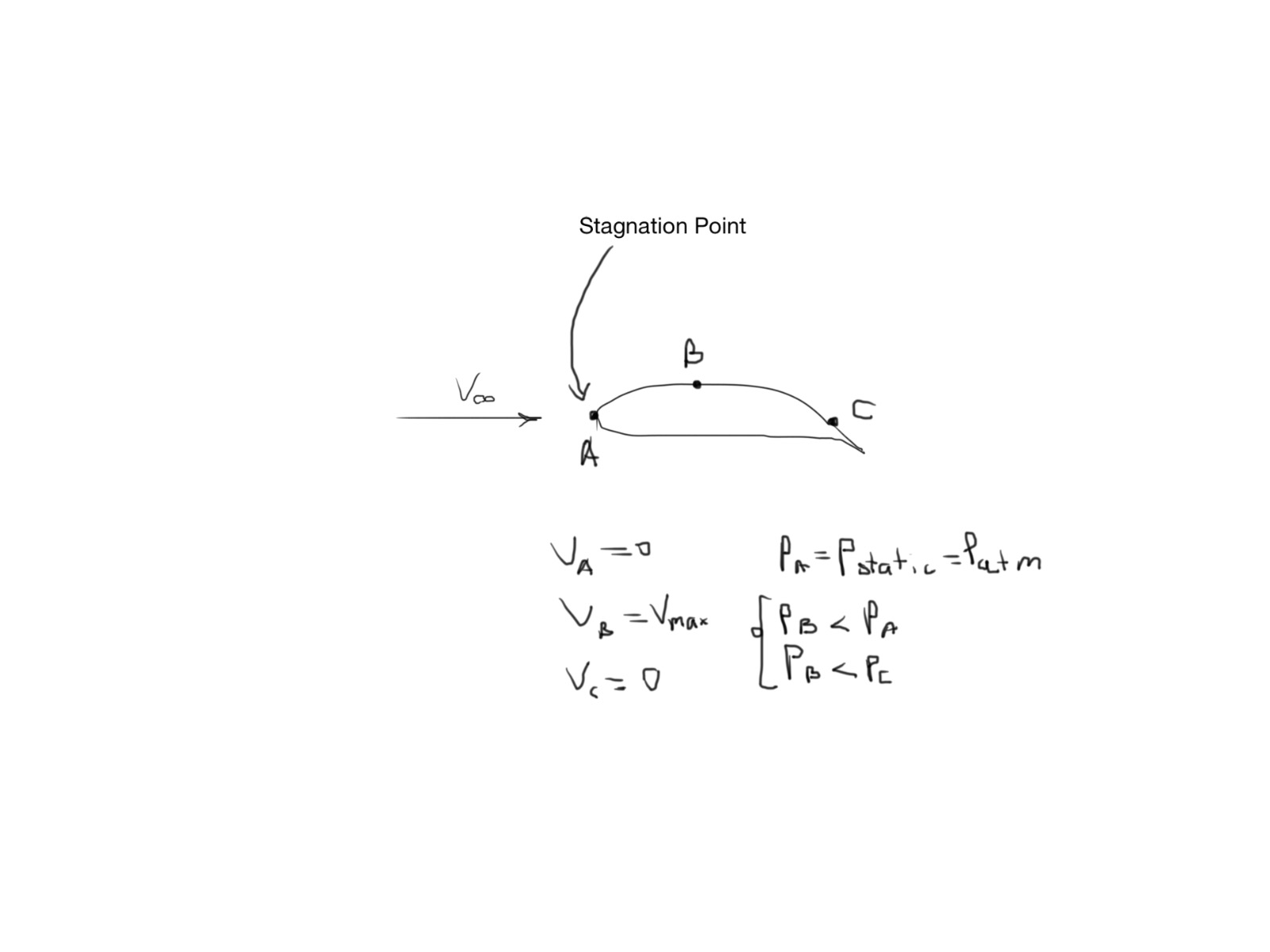 I think you are misunderstanding the meaning of the equation. You are picturing the equation as describing the behavior of individual molecules as they flow. It's not; the equation is describing a velocity and a pressure field (in the mathematical sense), not what any given molecule is doing. Molecules ("might") move in and out, but the field stays the same (assuming of course a steady flow, which is one of the conditions of the ideal flow). By picturing molecules, you are assuming that there must be something moving with a non-zero speed because molecules are being slammed into the boundary.

First, remember that the velocity in this situation is a continuous field. That is one of the assumptions of the ideal flow, otherwise you necessarily would have separation of the fluid (a "gap" would form) or the fluid would have to compress (by the way, that's the whole reason why the fluid is assumed incompressible), and it would not be a steady flow.

Second, remember that in the ideal flow the velocity vector on a boundary point is always tangent to the surface of the boundary, otherwise (again) the flow would separate from the boundary (or cross it), and then the "boundary" would not really be a boundary.

(If you have difficulty with the concept of a zero vector being tangent to anything, I'll replace "tangent" with more formal language: the actual requirement is that the dot product of the velocity vector and the boundary's normal vector is always zero: that is, the fluid cannot flow through - or away from - the surface of the boundary. If it cannot flow "along" the boundary, it cannot flow at all)

If you still want to use a "molecule/particle" view of the equation, picture it this way: at the stagnation point, no fluid molecule enters, and no molecule leaves. There is no flow at all.

If you find this contrary to your intuition about reality, you have to remember that this is an ideal fluid. In a real flow, slamming like that against a wing's front edge, the ideal flow conditions cannot be maintained (except as an approximation as long as the flow speed is low enough). The fluid does separate from the boundary at the front edge, and a wedge region forms in the fluid, were eddies develop and which flows rotationaly and independently of the main flow. The ensuing turbulence complicates the whole thing. You have to understand the ideal flow first, to be able to eventually tackle the more complicated reality.

For incompressible fluids, if the local flow velocity at a point P is zero, then P is a stagnation point in fluid flow. Using bernoullis equation, you can easily see that the term 1/2 *(rho)*v^2 ,is zero at P since v is zero. So obviously, only the static pressure will contribute, not the dynamic pressure.

The velocity they are talking about here is the average (vector) velocity of the molecules, averaged over each tiny parcel of fluid (containing many many molecules). For example, when a rigid solid is moving, its individual molecules each have a different velocity, yet we have no trouble writing F = mdv/dt. In Newton's 2nd law for a rigid body, the velocity we use is the average velocity of the molecules comprising the body. The same concept applies to a flowing incompressible fluid. What's happening is that the fluid is slowing down toward the stagnation point, so the downstream pressure (at the stagnation point) has to be higher than the upstream pressure in order to slow it down.

Not the answer you're looking for? Browse other questions tagged newtonian-mechanics fluid-dynamics ideal-gas flow or ask your own question.