Is there an ideal proportion for water to air in an espresso machine?

Let's imagine a very simplified espresso machine, and let's ignore the pump etc. and focus simply on the boiler. This is a metallic cylinder containing water, with a heater at the bottom, and a pipe inside running from close to the bottom, and out of the boiler. The water is heated, just below boiling point - once there is sufficient pressure, an indicator gives off a green light and the other end of this pipe is slowly opened, so that the pressure of the hot air pushes the water up through the pipe and into a secondary chamber. This got me wondering:

What proportion of water inside the boiler will make the green light switch on the fastest?

Let's assume we require a minimum amount of water, enough to fill an espresso cup, and the maximum amount of the boiler being completely full. Also assume the heater is fully submerged in water, at the bottom of the tank, and is not in direct contact with the tank itself.

Disclaimer: if that is not the basic mechanism of an espresso machine I apologise.

It depends a bit on what "green light switches on" really means. If you are trying to reach a certain pressure, this requires the water reaching a certain temperature (because saturated vapor pressure increases rapidly with temperature). Note - it's not simply "air", but "vapor", above the liquid.

Now the water has significant heat capacity: to reach a certain temperature, you need all the water to heat. The less water there is, the more quickly it will heat. But at the same time, if the volume of the "air" pocket above the liquid is greater, you will need to have more water evaporate in order to increase the pressure. This tells us how to do the math.

Assume a mass of water $m_w$, and volume of "air" $V_a$. For simplicity, we will assume a heat capacity $c_w$ for water to heat up, and $c_v$ latent heat of vaporization. There is a relationship between $V_a$ and$m_w$, since greater volume of water means less volume of "air". This means that all equations can be written in terms of just one of these variables. Assuming we have to reach a certain temperature $T$ at which point the saturated vapor pressure is $P$, you can now compute the following:

Heat needed to warm up the water

Heat needed to vaporize that amount of water

Heat needed to increase the temperature of the air (this is actually negligible compared to the other terms; I'm including it for completeness' sake)

This will give you an expression that is a function of just one variable. Minimize it, and you have your answer.

Here is some more detail for the calculation.

To reach 9 bar total pressure, the steam needs to have a pressure of approximately 8 bar (a little bit less as the air will be heated as well, increasing its pressure). According to the curve at http://in.ari-armaturen.com/fileadmin/IndianImages/steam_paathshaala/physics_6.JPG, 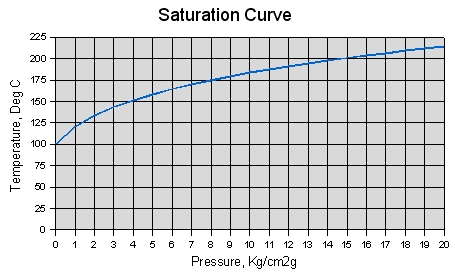 That happens at a temperature of about 175 °C. In what follows, this is what I will assume. Note that since the vessel is pressurized, the water will be heated all the way to 175 °C - it doesn't boil because of the pressure.

Amount of water that needs to evaporate to give rise to pressure of 8 bar at 175 °C in a volume $V$:

Now we have to reduce everything to a single variable. Let's make that variable $f$, the fraction of the original volume $V_t$ filled with water. I will ignore the fact that as water evaporates, the volume of space above the water increases a little bit.

You should therefore fill the espresso machine with just enough water to raise the pressure, PLUS the water needed to make your cup of coffee. Filling it more will take longer to heat. Also - the greater the volume above the liquid, the better you will maintain the pressure when water starts to leave the compartment.

NOTE - in the limit where $f$ is very small, the volume of water that needs to be heated and evaporated becomes significant; you will have to make some adjustments to the calculation in that case.

Not the answer you're looking for? Browse other questions tagged thermodynamics pressure water everyday-life air or ask your own question.

1
How do I determine the amount of water in a sealed container to create a given pressure?

2
Is there an equilibrium for water and air in a tank?
0
Pressure rating on a container underwater with hole and partly filled with air
1
The water in the tank are pressurized to 50- 100 PSI? but water cannot be compressed
0
Question regarding high air pressure on water in a closed cylinder
3
What will be the pressure rise due to a freely falling water from a Tank from a 20 m height to a partially filled pipe?
0
How much can water compress air?
0
Two small tanks vs One large tank
0
How can you calculate the water pressure in a sealed tank where an air bubble above the water is pressurised using a pump?