Why do large rockets make "popping" sounds during liftoff?

I have always wondered why the sound that large rockets make during liftoff is not constant and occasionally sounds as if it's "popping"? Which seems to resemble the phenomenon of "rolling" thunder.

This video for example (Caution, the link starts video at mid launch - so is Very Loud!)

I cannot see much of a visible indication that the rocket's exhaust is fluctuating. I would "expect" to hear a consistent rumble.

I kind of suspect the inconsistency of the sound is caused by interference of the multiple exhausts jets blowing against each other?

Or possibly that the solid rocket fuel burns at a rapidly varying rate?

I cant imagine that the combustion rate of the liquid stage would vary by much, and definitely not produce intermittent explosions.

Caution, the link starts video at mid launch - so is Very Loud!

First things first: The sound in any recorded video does not match the sound of being there. The launch of a Space Shuttle was so loud you could feel the sound. It however was not as loud as the launch of a Saturn V.

I cannot see much of a visible indication that the rocket's exhaust is fluctuating.

There are some visible indications of fluctuations in the exhaust in the linked video. There are obvious signs of turbulence in the underexpanded smoky exhaust from the Shuttle's solid rocket boosters (SRBs). Look closely at the video and you will see that the exhaust does not form a nice, even cone. That it forms a cone at all is a sign the the SRBs were underexpanded.

What isn't clear in the video is the nature of the exhaust from the Space Shuttle's main engine (SSME). As opposed to the overexpanded SRBs, the main engine was overexpanded at launch. This resulted in the formation of Mach diamonds. These Mach diamonds are clearly visible in the images below. 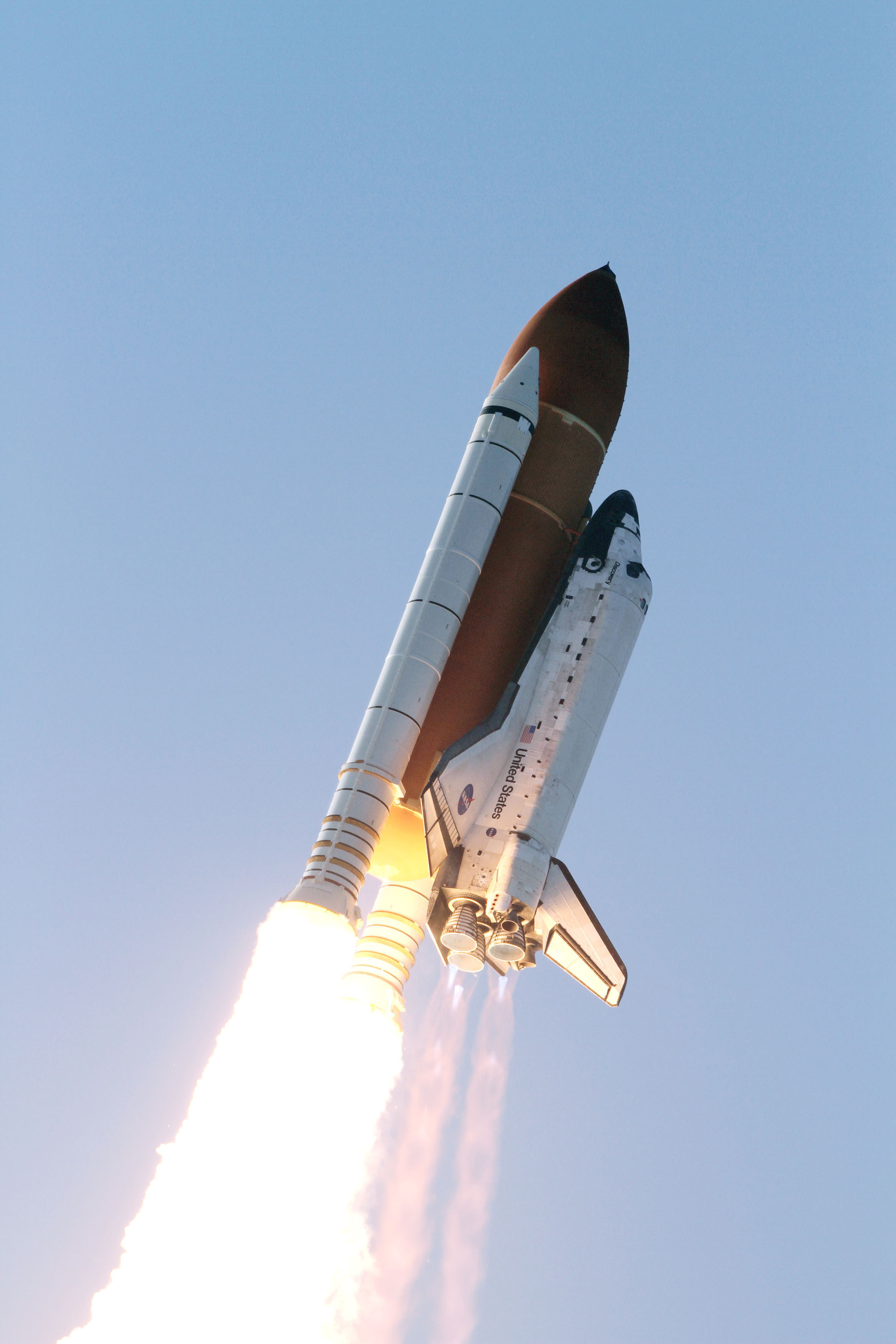 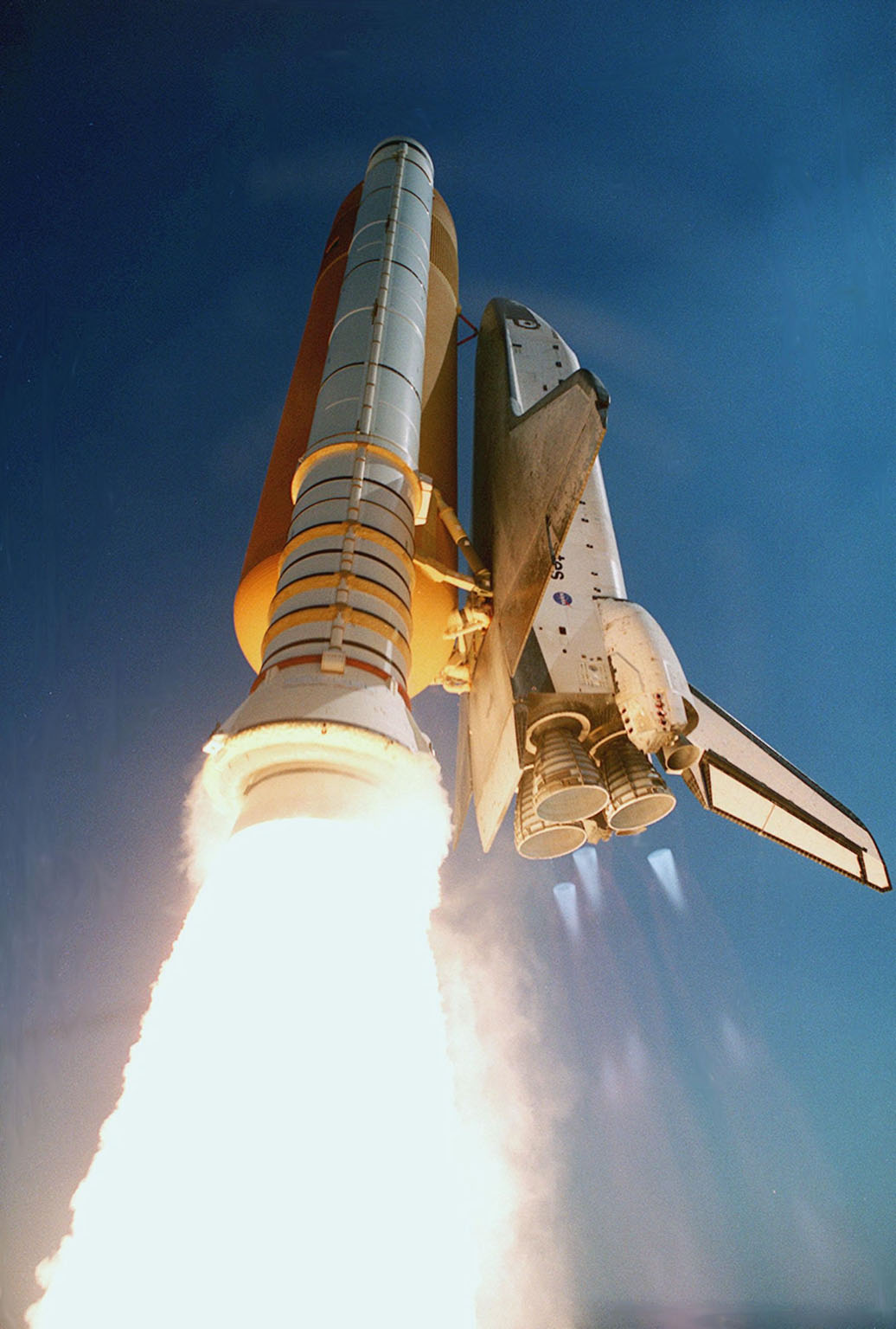 Those Mach diamonds alone were responsible for some of the uneven sound that resulted from a Shuttle launch. Another source of that noise was due to the nature of the SRBs. Unlike the fluid-fueled engines, the SRBs (as their name implies) were solid fuel engines. In engineering, nothing is ever perfect. Slight imperfections in the construction of the SRBs inevitable would have led to an uneven sound. Interactions between the supersonic underexpanded exhaust from the SRBs and the supersonic overexpanded exhaust from the SSME provided yet another source of that varying sound. One last source is that the noise was so loud near the rocket that the sound exceeded 194 dB, the loudest possible undistorted sound in air. The clipping in a turbulent atmosphere would have been extreme and uneven.

Sound exposure comes by the pressure drop by expansion of the gas (fluid) which emits the expansion energy as sound waves by the speed of sound. Wavespeed is usually faster than fluid momentum of the exhaust, except in supersonic exhaust, then they are equal which leads to shock diamonds.

this video explains it in Detail: https://youtu.be/4VFoyrK-o-w

Not the answer you're looking for? Browse other questions tagged pressure acoustics rocket-science or ask your own question.

4
Why do rockets accelerate fastest horizontally?
2
Why does a cooling motorcycle make popping noises?
6
Why are popcorn seeds soft after popping?
17
Why do we launch rockets during the day?
4
Why are rockets launched vertically?
1
How can a harmonica make some different sounds?
0
Why do popcorns sizzle after popping?
7
Why does warm water and cold water make different sounds?