In this video, the tutor finds a negative Thevenin resistance for a circuit. How does this make sense? What is the physical meaning of this?

Negative resistance is not something you see in normal circuits. However, it can show up in small-signal models of non-linear circuits.

A positive resistance means that if you increase the voltage, it increases the current. However, in some nonlinear circuits you can get into regions where, locally, a small increase in voltage can decrease the current that flows. If you do a small-signal model, some of those non-linear elements get replaced by resistors, and those virtual resistors may have a negative resistance in some cases.

I can't think of a scenario where I've seen it in a RLC circuit, but I've most certainly seen it in active circuits, where you can have amplifiers.

Thank you for the video reference which does not sem to be a RLC circuit.

You only have to look at the circuit below and its Thevenin equivalent to see that they are not equivalent as far as internal power dissipation is concerned-.

In your example, with a dependent voltage source, the resistance of $-4 \; \Omega$ is just a value which makes the calculations easier but it is not a real resistor.

In the video the lecturer makes the following transformation.

and notice that he has included a resistance of $+4 \;\Omega$ in the external circuit because he knows that on finding the Thevinen equivalent circuit a negative resistance of $-2 \;\Omega$ will appear.

To show that Thevinen actual works with an unrealisable $-2 \;\Omega$ resistor I suggest you try the following.

Now investigate the effect of having not having the $4 \; \Omega$ "load" resistor in the circuit both using the Thevinen equivalent circuit and simple circuit analysis and with $0 < R_L<2\; \Omega$
This should give an insight of how the circuit functions under different loads.

An example of a device which has a negative incremental/small signal/differential resistance is the tunnel diode. 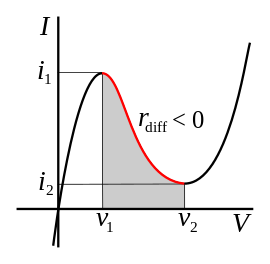 Where if $v_1<V<v_2$ the reciprocal of the gradient of the graph $\frac{dV}{dI} = r_{\text{differential}}$ is negative.
This means that in that region if the voltage $V$ increases the current $I$ decreases.