How do electrons interact if one of them had just exited the two slits of the double-slit experiment?

Consider the following experiment: a double-slit set-up for firing electrons one at a time. Let's now add a second electron (orange), which is fired parallel to the first one, but in the opposite direction, and so as to pass closer to one slit than the other, and, importantly, above the plane in which interference occurs: 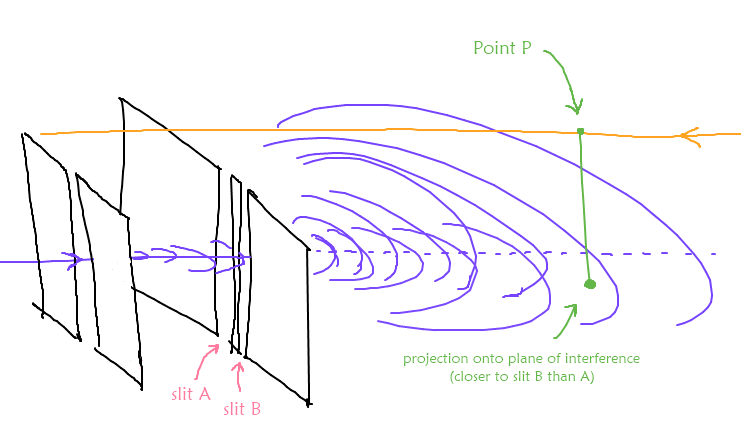 The firing of the two electrons is timed so that the orange electron is "closest" to the purple electron somewhere around point P, i.e. after the latter has passed through the two slits.

Presumably the electrons will repel due to having charge. Presumably an interference pattern will still be produced by the purple electron if the experiment is repeated thousands of times.

Now my question is, how exactly does the orange electron get deflected? If the experiment is repeated, would it always hit the same point on the opposite wall, or would it also start producing a sort of an interference pattern?

Thanks to user:Timwi for the diagram!

This is a typical trade-off between the position properties of the purple electron and its wave properties.

I want to emphasize that all such problems can be exactly calculated - just use the proper quantum mechanics for two particles. The wave function - in the non-relativistic picture - is psi(x1,y1,z1,x2,y2,z2,t) where 1,2 are labels of the two electrons. This wave function is antisymmetric under the exchange of x,y,z for 1 and 2 and it evolves according to a Schrodinger equation for 2 particles and its squared absolute value knows about the probability that both electrons will be observed at any pair of places.

One also has to be careful because the electrons are indistinguishable, so that if they get really close so that they could possibly get exchanged, one has to subtract (because of the Fermi statistics) the amplitudes in which they exchanged and one in which they have not, to keep their wave function antisymmetric.

I also want to emphasize that the electrostatic repulsion between two electrons in such experiments is tiny and should be more properly described as a "quantized" exchange of a single photon. Such a repulsive interaction always allows the possibility that additional photons are emitted (radiation from accelerating charges), and these extra photons may reduce the overall sharpness of the interference pattern further.

I think that Luboš Motl has covered this rather well, but I get the idea that what you're looking for is a discussion on how to calculate the electron density for the combination of a single "free" electron and another electron that's gone through the interference. I'll give you the flavor of the calculation without actually doing it.

Let $\psi_p(x)$ be the wave function for the purple electron that went through the slit where $x$ means a 3-d point and I'm leaving off the time variable by assuming that there's no dependence on it. This is a complex function and when you evaluate it on the screen you'll find that its squared magnitude $|\psi_p(x)|^2$ gives you the interference pattern.

Then the probability that you get one electron at the point $x_1$ and the other at the point $x_2$ is proportional to $|\psi(x_1,x_2)|^2$. This calculation assumes that the electrons do not interact.

As Dr. Motl notes, so long as the two electrons don't get extremely close this will be quite accurate and the result will be the hole drilled by the orange electron and the scattering pattern from the other. To add the interaction you will have to use quantum field theory. In that theory you begin with the above calculation for $\psi(x_1,x_2)$ and add corrections to it. The first correction will be the addition of a single photon that is emitted by one electron and absorbed by the other.

The photon calculation is an example of a Feynman diagram. See http://en.wikipedia.org/wiki/Feynman_diagram
The pretty drawing is: 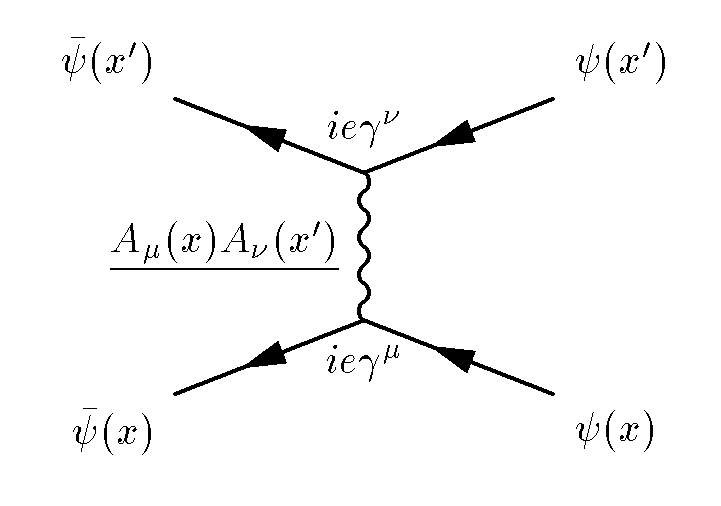 and the mathematics is kind of messy and should be the subject of a separate question.

Not the answer you're looking for? Browse other questions tagged quantum-mechanics experimental-physics quantum-electrodynamics quantum-entanglement double-slit-experiment or ask your own question.