Calculating total radioactive decay of a sample including daughter products

I've been searching for information on this, and just not coming up with what I'm expecting to find. So I have concluded I am either asking the wrong question (i.e., phrasing it wrong), am barking up the wrong tree altogether, or am asking about something that is just not easy to do. Here's an outline of the kind of problem I have in mind.

Let's say I have a given sample of a radioactive isotope. For our example let's say it is 1 g of Radon-222, which has a half-life of 3.8235 days. Let's say I'm interested in calculating the total decay energy from the sample over the period of one week.

Except that Rn-222 will turn into Po-218, which has a half-life of 3.1 minutes, which is significant for the time period under discussion. So we've created 0.72 g of Po-218 and some point over the course of that week, and we'd need to then say how much of that has decayed as well and add those alphas (and a small number of betas) into that total output as well. And that will require knowing when the Po-218 was created, because it was being created continuously over the course of the week according to the half-life's exponential decay. And it seems in principle we could make a pretty good stab at guessing when this was created just based on the probabilities.

And once we've done the Po-218, we need to look at its daughter product, Pb-214, which has a half-life of 26.8 min, and so is also significant for the time period under question. And so on until we hit something stable enough to not matter for the time period we're asking about (a week in the case of this example — so by the time we get to something with a half-life measured in some multiple of that, we could probably ignore it).

I'm more a computer guy than a math guy, but this is starting to look like calculus, which is fine, I can make a script do this if I know the calculations I'm supposed to be doing, and I can feed it a list of isotopes, half-lives, and decay modes (and their probabilities and energies). But I have had a hard time finding the right equations and am not super interested in re-inventing the wheel, because I know this kind of thing must be very old-hat.

So anyone who can point me in the right direction (or tell me that I'm looking at this from the totally wrong angle) would be super helpful. And I am fine with something that is back-of-the-envelope in terms of its "resolution" in time — I am just trying to get things in the right order of magnitude, and ideally would like this approach to work with a lot of different isotopes (even if it requires having a master table of different decay products for the limited number of decay chains I am interested in).

TLDR;: I have a sample of Rn-222. How do I calculate the total energy of its various decay modes over the course of a given amount of time, including its daughter products?

I think the answer is that the math is quite difficult.

The process you are describing is part of the 4n+2 decay series for radioactive isotopes: https://en.wikipedia.org/wiki/Decay_chain You're starting at the Rn-222 spot. 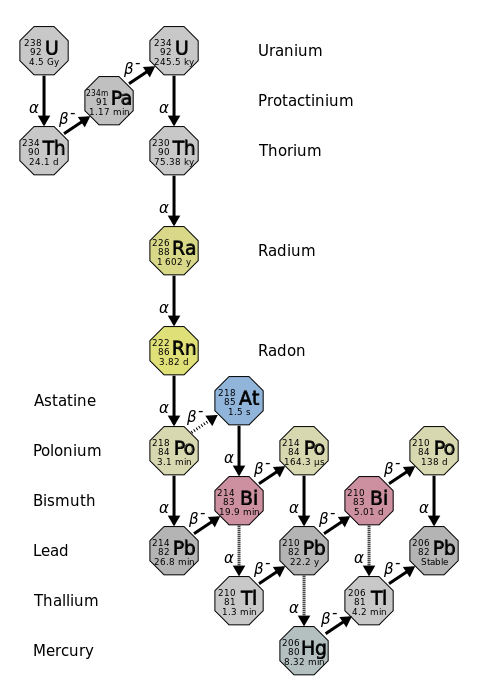 If you consider only the main decay sequence, and stop at Pb-210, with a 22.2 year half-life, you still have 6 (six!) linked differential equations to solve.

You could just look at the overall reaction, from Rn-222 to Pb-218, with the emission of 2 electrons and 3 alpha particles, find the overall energy release per atom of Rn-222 and assume that it follows the simple exponential decay of the Rn-222

The first thing you can do is simplify the decay chine because come of the branches occur very infrequently.
For example lead-210 only decays to Mercury-206 $1.9 \times 10^{-6}\%$ of the time.

Now since your time frame is 1 week the first part of the chain from Radon-222 to lead-210 can be collapsed into one decay of half life $2.82$ days.
This is because the intermediate products have a half life which is much less than 1 week and so on the scale of 1 week decay "instantaneously$.
Of course you will have to add up all the energies which are released during these decays.

When study decays a parameter called the decay constant or transformation constant $\lambda$ is used instead of the half life $\tau$.
These constant are related in that $\lambda \tau = \log_e 2$.

The equations relating decay chains are derived or stated in many sources one of which a paper by Harry Bateman which was published in 1910.
In it he shows how finding the solutions to the differential equations can be made easier but also lists solutions from which you can extrapolate the equations for decays further down the chain.

One last thing is that you at some stage you need to convert your mass of radon into the number of radon atoms.

Not the answer you're looking for? Browse other questions tagged radiation radioactivity half-life or ask your own question.

3
Why is long-term radioactive material so bad?

2
Effect of radioactive decay on the structure
1
Half life and Radioactive Decay
2
How much radioactive decay in thoriated TIG rod (and total for decay chain)?
1
Is $T_{decay}$ the time it takes for an amount of radioactive nuclei to decay $\it{completely}$?
0
How to Clearly Define Sample Size in Half-Life Measurements?
16
Why is this way of calculating mean life of radioactive atoms incorrect?
0
Radioactive secular equilibrium and the relationship between the half lives of the parent and the daughter nucleus