Strange reflection pattern on the water

Today I noticed the weird reflection pattern on a river on my way to school. As can be seen from the picture, the surface seems rough somewhere and smooth somewhere else. My question is: What causes this amazing phenomenon? 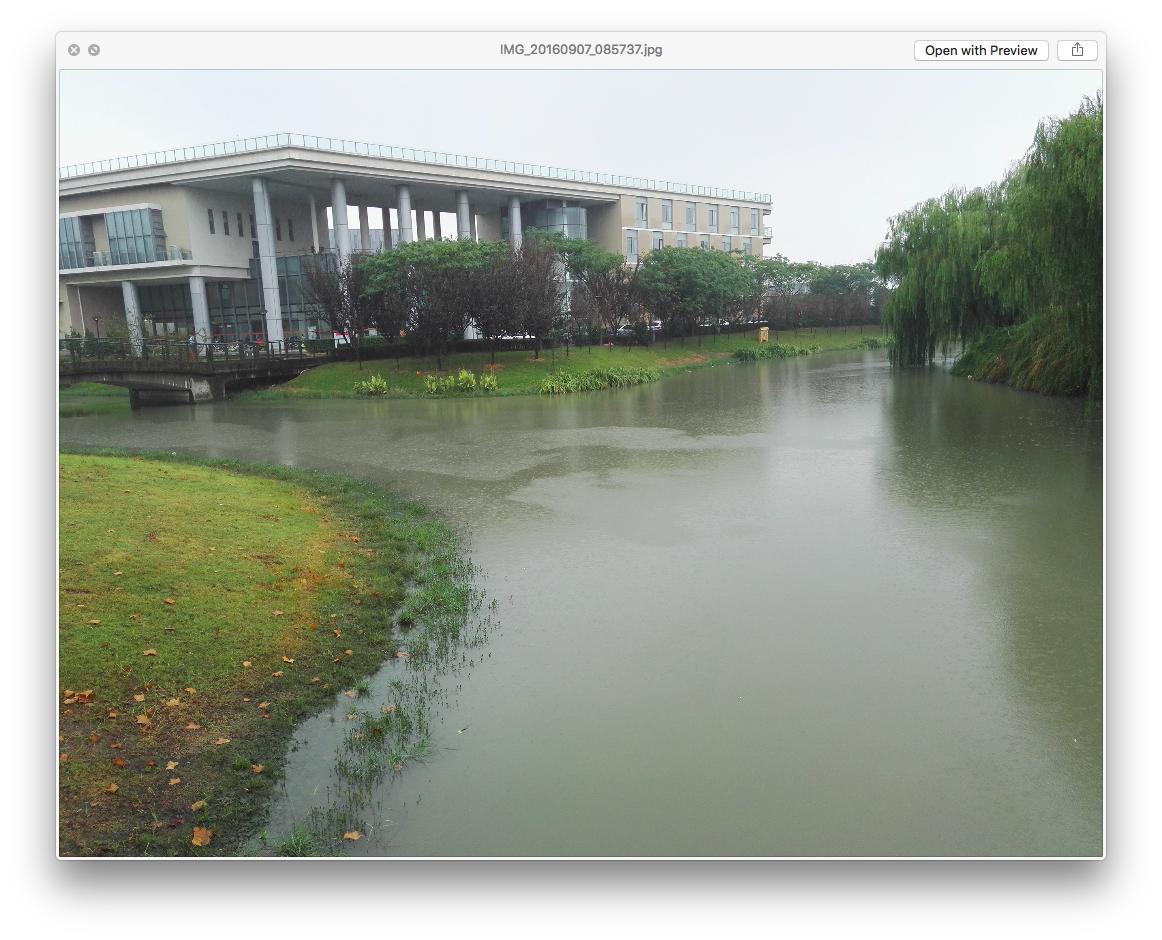 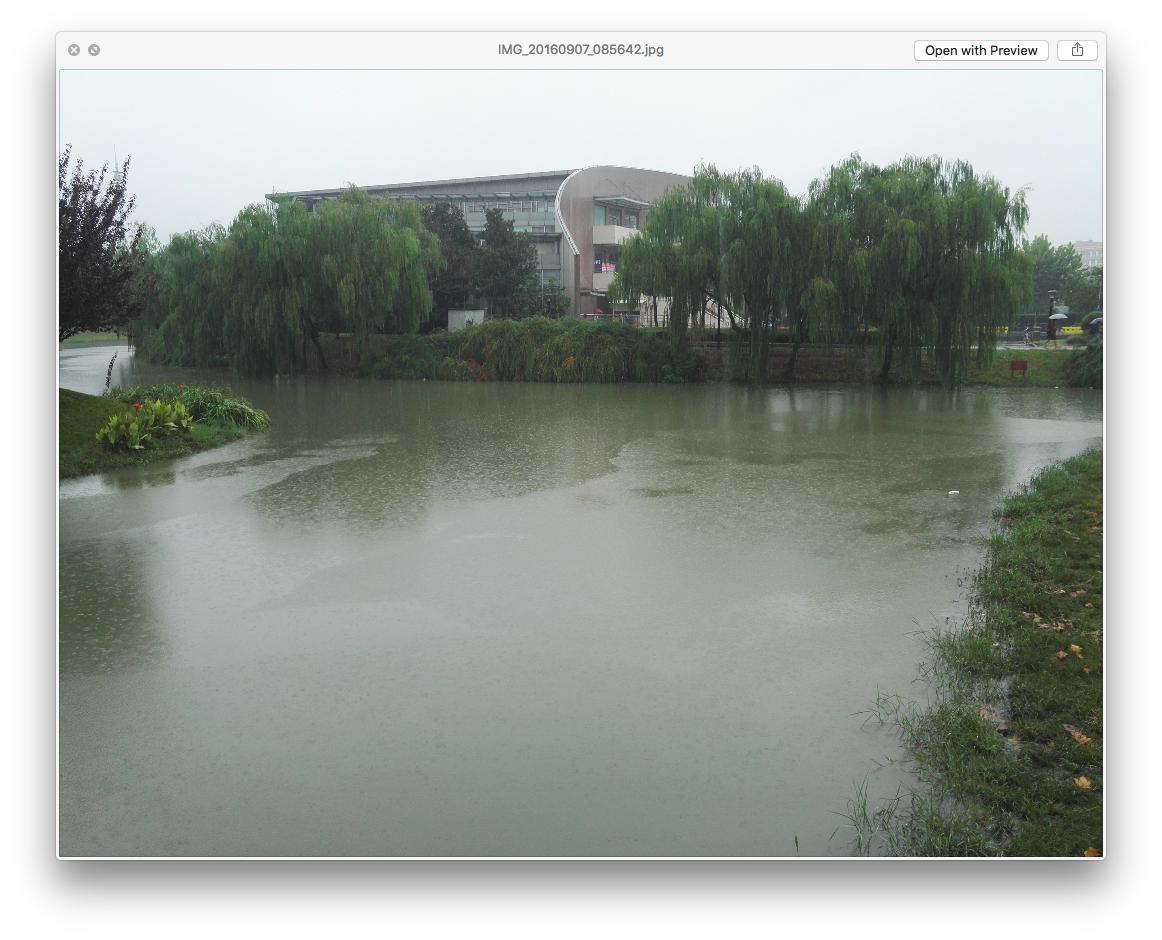 This question is not a duplicate of that one, because:

It looks like those patches consist of wave patterns of much shorter wavelength than the rest of the river/lake. This could be an effect of capillary waves which are driven by wind/rain, while the oscillation itself is sustained by capillary forces.

Water wave theory conceptualizes waves as either being governed by gravity or capillary forces. Le Mehaute, "An introduction to hydrodynamics and water waves" is a wonderful book that explains those concepts with passion and detail. Gravity waves follow the dispersion relation $$ w(k) = \sqrt{gk\cdot\tanh{kd}} $$ with water depth $d$, angular frequency $\omega$ and wave number $k\propto1/L$. The interesting point here is that the wave's celerity (velocity) $c=\omega/k$ depends on water depth, $c\propto\sqrt{d}$ only under shallow conditions, $d/L\to0$ (because $\tanh{x}=x$ for $x\to0$). While it does not under deep-water conditions, $c\propto\sqrt{L}$ for $d\to\infty$. Wave crests at the beach are the best illustration for this effect, as the deep-water waves are approaching shallow terrain and thus get slowed down, while their crest (at higher $d$) is still fast.

Note also that shallow-water waves are non-dispersive (celerity does not depend on wavelength), which could explain a longer persistent wave pattern compared to deep water waves.

In contrast, capillary waves are only driven by surface curvature effects. Their short wavelengths justify the deep-water approximation $d\gg L$ in almost any water body, which leads to the dispersion relation $$ \omega(k) = \sqrt{k^3\sigma/\rho} $$

Their combined behaviour can be described as a dispersion relation for capillary-gravity waves, which is illustrated in the following sketch: 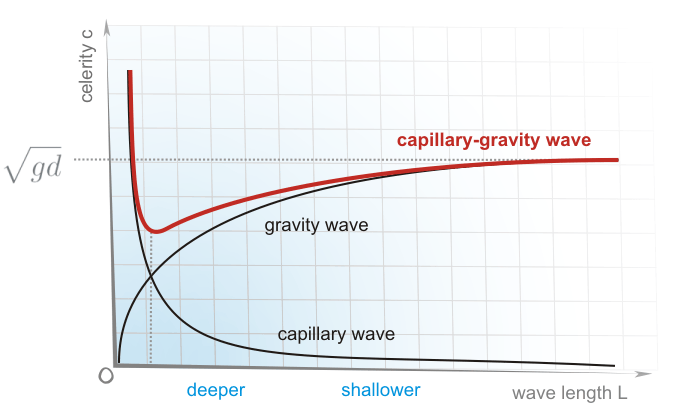 I would hypothesize that the patches that you see consist of waves oscillating around the critical wave length of 1.7 cm and below, where capillary forces determine the nice looking short-wave pattern. Consequently, this part of the river can be interpreted as deep water, while smoother/longer waves indicate non-dispersive low-velocity waves, $c\propto\sqrt{d}$, in shallow water.

It seems that this approach could make sense with respect to the patterns in your images and the likely topography below the surface. But also under-water plants and vegetation will certainly have an effect, though.

Not the answer you're looking for? Browse other questions tagged optics everyday-life reflection or ask your own question.

19
Why does the lake surface appear darker in some areas?
0
Can a gust of wind have a distinct blade-like edge?

16
Why does water appear still near the shore
12
Double Reflection!
25
Why is the Sun not exactly above its reflection in water?
3
Strange pattern on car windows
8
Weird Reflection Pattern in Reading Glasses
0
Reflection of an under-water-object
1
Will the mirror reflection make the interference pattern disappear?
7
Colour patterns from the reflection of my window