How is motional EMF developed?

According to my textbook and several other sources on the internet if we we move a rod in the direction perpendicular to a uniform magnetic field, the electrons will also move as per the direction given by the Lorentz force. After this it is written that due to accumulation of negative charges on one side and positive charges on the other side an electric field is developed and this electric field after a while becomes equal to magnetic force and that charges don't move any further and an EMF is developed.

Now my book has shown the rod moving on two metallic rails connected to a galvanometer. What I don't understand is that how would the aforementioned emf /potential difference be developed if the two end of rod are connected in a circuit, because wouldn't the charge that was to be accumulated just move past onto the metallic rails?

Consider an individual charge carrier in the wire. I cite a portion of one of my previous answers:What is the mechanism by which magnetic fields do work?.

As the diagram below shows, the initial magnetic force will be upwards, perpendicular to the current. No work is being done. Since the charge carriers are constrained to move in the wire, they will exert a force (not magnetic in nature) on the wire. Hence the wire will start moving upwards. 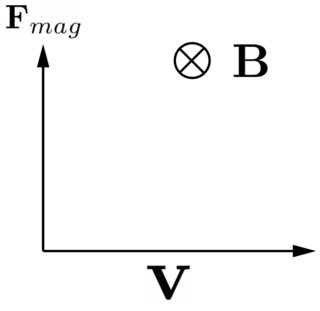 Now the instant the wire starts moving upwards, the charges will also gain a velocity component $\textbf{v}^\perp$ perpendicular to their original motion. This component will produce a horizontal component $\textbf{F}_{mag}^\perp$ of the magnetic force opposing the flow of current. In the absence of a source then, the currents will decrease, and the work done by the magnetic field in doing so will precisely balance out the work done by the horizontal component in raising the ring. Hence the magnetic field will have done no work, and of course we see this visually because the total force $\textbf{F}_{mag}$ is indeed perpendicular to the total velocity $\textbf{v}$. 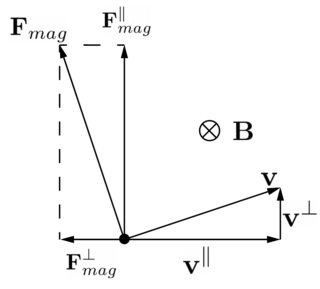 Take the integral of $\textbf{F}^\perp_{mag}$ along the length of the rod and you get your motional emf. Thus, the motional emf is really just a component of the Lorentz force, which just so happens to have the form: \begin{equation} \varepsilon = -\frac{d\Phi}{dt} \end{equation} which is the same as for a Faraday emf (which is instead due to a changing magnetic field). This is not a coincidence (of course), and is what led Einstein to his formulation of special relativity.

This explanation can be easily extended to a rod moving on two rails.

EDIT: i don't know if this is useful in your context but as the rod and the two rails form a circuit one would also need to take into account the self-inductance. When the current in the circuit changes the magnetic field produced by it will change. This will induce a back-emf opposing the change in current.

As soon as any of that accumulated charge starts to move around the external circuit the electric field inside the wire, which produced a force on the charges equal in magnitude but opposite in direction to the Lorentz force, is reduced.
This means that the Lorentz force can now move some more charges to replace the accumulated ones that have gone for a walk around the external circuit.
Then the sequence repeats itself.
Thus you get a continuous flow of charge around the circuit.

If a conducting rod is moved across a magnetic field, the magnetic force would cause a separation of charge, and a voltage difference, which could be measured with a high resistance voltmeter. If the charge is allowed to floe through a low resistance galvanometer, the voltage is likely to drop. In either case the emf is the work required (in joules per coulomb) to move charge from one end of the rod to the other.

The emf produced due to the relative motion of the loop and magnet is given by E=VBl.where l is the length of the conducter and moving at speed V relative to the magnet.the emf can be calculated two different points in terms of magnetic force on moving electrons in a magnetic field and second term is rate of change of magnetic flux.both yield same result.

19
What is the mechanism by which magnetic fields do work?

7
What force causes the induced EMF of a loop? And, the difference between a loop EMF to motional EMF?
4
How varying length of loop affects induced emf
3
Confusion about induced emf vs motional emf
4
Motional EMF and Flux rule contradiction
2
Induction of emf by motion of a conductor (Motional EMF)
1
Explanation of motional EMF in a rod
2
Does a time varying magnetic field produce an EMF in an open conducting loop? (slidewire generator example)?
1
Contradiction in Faraday's law and Motional EMF
1
Motional EMF inside material with resistance
0
Motional emf of two sliders