For elastic collisions of n particles, we know that momentum in the three orthogonal directions are independently conserved:$$ \frac{d}{dt}\sum\limits_i^n m_iv_{ij} =0,\quad j=1,2,3$$

So why is there a need to put 1/2 in front of this conserved scalar quantity, kinetic energy?

I'll start with relativity. The kinetic energy formula is the extra energy in a moving particle

in units where c=1. The one half comes from the expansion of the geometrical square root, and the square-root form in the denominator is uniquely and naturally fixed by requiring that the energy and momentum fit together into a four vector. This is the only natural definition in relativity, and it is justified by geometry.

In Newtonian mechanics, the energy and momentum transform together after a Galilean boost. If you have a closed system with momenta $p_i$ that add up to zero (center of mass frame), the change in the kinetic energy after a boost, which shifts $p_i\rightarrow p_i - m_i v$ is

The change has two parts,

This is the mixing of energy and momentum, and this part is the total momentum dot the velocity, and it is zero when you start in the CM frame. The other part is:

This requirement, that the energy is consistent under galilean boosts, is what is meant by the mixing of momentum and energy. It is simplest if you take the coefficient 1/2, ultimately because this is the natural nonrelativistic limit of relativity. You would have a factor of 2 in the p mixing term if you didn't take the coefficient 1/2. It is actually a testiment to the insight of the 19th century physicists that they adopted the most natural convention before relativity was discovered.

The half in the non-relativistic kinetic energy can be traced back to the Work-Energy Theorem$^1$.

Of course, if one is only interested in solving an elastic collision problem for an isolated system of point particles using momentum and kinetic energy conservation, no harm is done by multiplying the energy conservation equation with a factor 2 on both sides of the equation.

In Special Relativity velocity's additive group is not the Reals, so you get a different result of that integration.

Providing that acceleration is uniform and the initial velocity is zero, suppose there is a graph with velocity $v$ on the $y$-axis and time ($t$) on the $x$-axis. Furthermore there is a line passing through the origin and has a slope equal to the acceleration of the body. For a given interval of time, the distance traveled by the body is equal to the area under the line and that is $d = vt/2$. If we substitute $d$ into $W = mad$ we get $W = mavt/2$ (notice how the half has appeared). The equation becomes $W = matv/2$ but since $at = v$ we get $$ W = \mathrm{KE} = \frac{1}{2} mv^2. $$

See the below diagram where the equation of the line (i.e. a lineal function) has a slope equal to the acceleration of a body. Recall the y-intercept form of equation for a line or $y = mx + b$, where $m$ represents slope and $b$ represents the y-intercept or initial velocity. Notice also the shape of the area $d$ is that of a right triangle. This means, $$v = at$$ 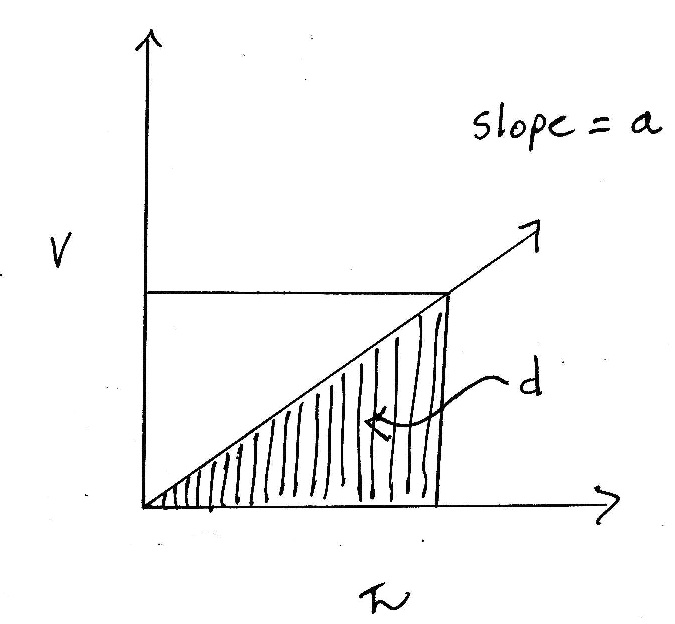 Kinetic energy isolates the energy associated directly with the vector motion of a specific object, and excludes the offsetting momentum to other objects which must necessarily exist, in the opposite direction, in order to satisfy Newton's third law.

The sum of all of the kinetic energy created across all objects equals the amount of energy so applied, but since any single object (used very loosely) can only "own" the one-half of the energy associated with its total greater momentum-neutral motion, that is therefore also all that it can transmit by passing on its own momentum in a collision.

Other forms of energy capture the total energy required to create motion in a momentum neutral fashion. Notably, gravitational potential energy includes both the motion associated with an object falling down to earth, and the much smaller, but still momentum-equal, motion of the earth rising up to meet the object. Thus the existence of the one-half convention. Related: Gravity and KE

The same reason why distance is half the acceleration I have my own ways of answering the question since i don't know calculus. Anyway

multiplying the time t by acceleration a gives us the velocity

18
Why there is a 1/2 in kinetic energy formula?
3
What is the proof for kinetic energy $= mv^2/2$?
1
Why is kinetic energy defined as $(1/2)m v^2$?
32
Why does work depend on distance?
13
Why is momentum defined as mass times velocity?
11
Intuitive meaning of factor 2 in formula of vertical throw max height $h=v^2/2g$
8
A question about $E=pc$ for massless particles
7
Coincidence, purposeful definition, or something else in formulas for energy
9
What can be known about the formulas for energy only from the fact that it is conserved?
1
Why does a $1/2$ appear in this simple capacitor equation?
See more linked questions