Does wood affect the tone of an electric guitar?

I just want objective answer free of emotion. Can wood affect tone? What actually makes the difference in tone?

Yes, it can. Although a simple treatment of a guitar (electric or acoustic) regards the strings as having fixed endpoints, this is not actually true. Instead the whole instrument is involved: when the strings are plucked they transfer energy into the neck and body of the guitar (and, of course, the other strings) via the nut & bridge and the whole thing ends up being some hugely complex system. For an electric guitar played loud there are yet further complexities introduced as the amp feeds energy into the system (short of out-and-out runaway feedback) which makes a further contribution to tone). Everything about this system tends to matter: the wood, how hard the varnish is, the neck joint, the neck (a lot), how the bridge and pickups are mounted &c: it is just a complicated nonlinear mass of interactions.

It is clearly the case that it matters rather less for electric guitars than acoustic ones, but it definitely matters.

There some easy, related, experiments you can do, although they all require multiple guitars. I've done these but not in a controlled way, although I am confident of the results.

The first is to compare the acoustic loudness of different electric guitars. What you will quickly find is that it varies, quite a lot. I have a couple of Les Pauls (actually Heritage H150s) and a Tele (again: actually a hacked-around Yamaha), and the tele is very significantly louder acoustically than the other two. Well, why? The answer really has to be that more energy from the strings is being coupled into the body and hence the air. What you are hearing is the body of the guitar, and what you hear depends on the physical characteristics of what the body is made of: wood (it also depends on the shape and everything else in sight, of course).

The second is to knock the body of various guitars with your knuckles. You will immediately find that the 'clonk' noise you get is different for different guitars. Some have a really noticable pitch, some are much broader spectrum, some are much louder and so on. People often judge teles by tapping them like this.

And finally it is interesting to compare the sustain of various guitars. This differs radically. My two Heritages, which really should be identical, have significantly different sustains, and, worse, they have different sustains (than each other) at different places on the neck: one is not uniformly longer than the other. Well, sustain differs because more or less energy is being removed from the string by the structure of the guitar (not the air, which is the same air). And, of course, the structure of the guitar preferentially removes some frequencies (the experiment above established that it has resonant behaviour), and this affects tone.

Finally, you'd expect that a guitar which was loud in the first test would have poor sustain in the last. Well, to some extent yes, but not as much as you'd think. A guitar which is loud also tends to 'hear' the amp more, so at high volumes it can have more sustain (I don't play at high enough volumes to do these tests as I have irreplaceable ears).

An electric guitar works on the principle that there's a permanent magnet and metallic coil in the body of the guitar (a.k.a pickup) in which electrical signals are created when a metallic vibrating string (the actual string of the guitar) vibrates at the certain frequency, and thus disturbing the magnetic field created by the magnets.

Now, as far as I know, the frequency of the vibrating string should only be a function of its characteristics, and its boundary conditions (outer-most nodes, a.k.a on what fret you hold it against).

So the answer should naively seem to be no, unless the body type\material of the guitar somehow makes the strings vibrate a little differently (assuming the same pickups are used on every body type). I can't really imagine how would the body of the guitar affect that (I wouldn't mind to be educated in the matter myself:).

The short answer is yes, different wood species have distinguishable sound characteristics, influencing the tone of an electric guitar.

For accurate testing, it is important to have the solid wood body properly connected to ensure that the guitar functions as a mechanically bound system under tension as the instrument is intended (e.g. bolt on or neck through build).

You can think of any material, including wood, as being composed of very small parts held together by springs of various strengths. Some springs are more stiff than others. Systems of springs can be set to vibrating.

Sound waves impinge upon wood. Some of the wave is reflected, some penetrates into the guitar and this is frequency dependent. Different wavelengths of sound travel at different speeds in different materials. Similar rules apply here that apply to the refraction and reflection of light.

The result is some combination of frequencies meeting one part of the guitar, and ending up in other parts and different times. In acoustic guitars this is effected by sizes, shapes, and composition of the various parts.

Things change quite a bit for electric guitars. The strings don't vibrate without vibrating the body. How the body vibrates depends on several material factors. 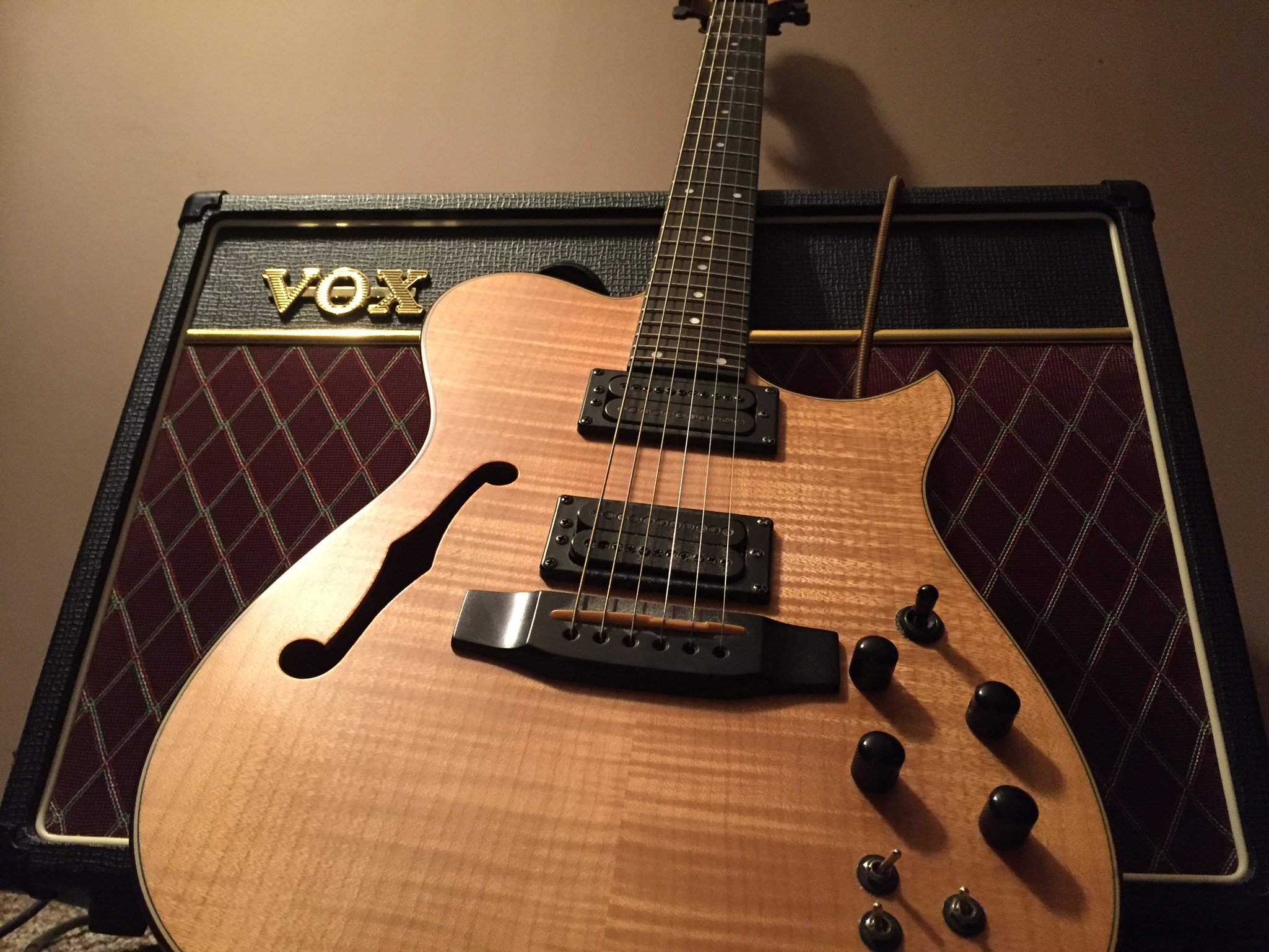 Not the answer you're looking for? Browse other questions tagged waves acoustics string or ask your own question.

5
To what degree does guitar construction affects the vibration of the strings?
2
Using sinusoids to represent sound waves
14
Help me understand resonance
12
How does an acoustic guitar amplify its sound?
5
Tension in a vibrating loop
3
How to find the first-harmonic frequency from the frequency spectrum of a recording of this harmonic being struck on a guitar?
1
Trying to understanding resonance, harmonics wrt standing waves
8
How does a guitar work?
0
How to calculate the position and number of holes to put into a woodwind so it is able to play a certain set of pitches?