The damped resonance frequency must tend towards zero as the damping increases because, at and above critical damping, the undriven system will not oscillate for any set of initial conditions.

This is most easily seen in the Laplace domain. The poles of an undamped SHO system have zero real part, i.e., the poles are on the imaginary axis.

As the damping increases, the (complex conjugate) poles move into the left half plane with increasingly negative real part while the imaginary part moves towards zero.

At critical damping, the poles are real and equal, i.e., there is no oscillatory component.

Above critical camping, the poles are real and distinct and move apart along the real line as the damping increases. 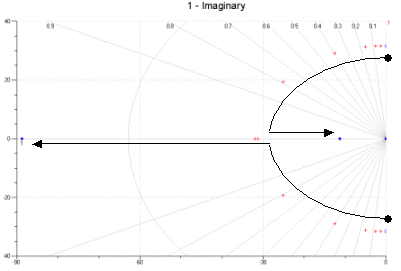 For an underdamped SHO, the step response is an damped sinusoid with lower frequency than the undamped case.

For a critically or higher damped SHO, the step response is monotonic, i.e., no oscillation.

Not the answer you're looking for? Browse other questions tagged resonance or ask your own question.

1
What really is the significance of the resonant frequency in terms of “ease of vibration”?
0
Why is the energy stored in a driven oscillator equal to the product of friction dissipated power $P_\text{fr}$ & decay time $\tau$ at resonance?
10
A conceptual doubt regarding Forced Oscillations and Resonance
1
Speed of Sound using Resonance
21
Non-resonant but efficient frequencies
1
Resonance: Conceptual misunderstanding
1
Resonance and modes
0
What is the effect of mass on resonance amplitude?
1
Why are higher frequencies amplified less by filling a bottle with warmer water instead of colder water?