Based on the recent videos and articles about quantum delayed eraser experiment (https://en.wikipedia.org/wiki/Delayed_choice_quantum_eraser), I was thinking about modification of this experiment and wondering what it would result in (or if it is even possible to conduct such experiment). I am in no way a physicist, so bear with me...

In the original quantum eraser experiment as shown below, $D_0$ (screen) photons correlated with photons detected at detectors $D_3$,$D_4$ always create classical diffraction pattern (no interference) and we can tell which path they went. On the other hand $D_0$ photons correlated with $D_1$, $D_2$ create interference pattern since after the photons went through these, we have no way of telling which way the photons original went. 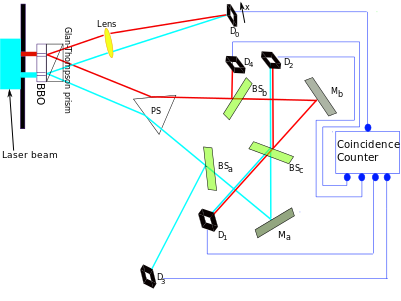 Now here is a modified thought experiment: Let’s replace the bottom with device that is able to delay light for certain amount of time, let’s call it delay device. For the sake of argument this device is just a black box (perhaps this could be sending light over the space very long distances and curving back, or mirrors, …). Now the point is to causally connect the action we perform after the light leaves this device with pattern that we observed at $D_0$ before.

So basically we will turn on the laser beam for some defined time interval $t_0$ and then based on the pattern we saw, we do one of the following steps:

a) If there is an interference pattern at $D_0$, we connect the end of the delay device to the detectors $D_3$, $D_4$ only, so that for all of the photons we detect which path information.

b) If there is no interference pattern at $D_0$, we connect the end of the delay device to lens that will “erase” which path information.

The delay device needs to delay light long enough to actually observe the pattern and made a decision based on that. Only after this decision is made the light should reach end of the delay device. Following figure attempts to show the modified version of the experiment: 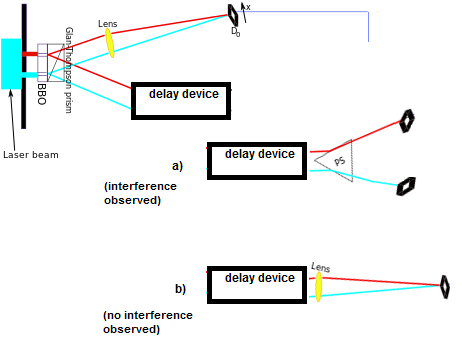 Now what will we observe?

If we observe the interference pattern, it means we went through step $a)$ and which path information was detected, which should not be possible.

If we observe no interference pattern, it means we went through step $b)$ and which path information was erased, again seems not possible.

Overall my point is to causally connect the interference pattern with decision of erasing/not erasing which path information. Moreover this removes the need to time correlate photons individually, since simply all of the photons during given time will be either detected or its path will be erased.

Is this experiment itself flawed? If not, what will we actually observe?

You can't determine if there is an interference pattern at D0 without the data from the correlations at D1 - D4, so it is impossible to set up the the experiment you describe.

From the wikipedia page:

The total pattern of signal photons at the primary detector never shows interference, so it is not possible to deduce what will happen to the idler photons by observing the signal photons alone. The delayed choice quantum eraser does not communicate information in a retro-causal manner because it takes another signal, one which must arrive via a process that can go no faster than the speed of light, to sort the superimposed data in the signal photons into four streams that reflect the states of the idler photons at their four distinct detection screens.