While studying I came across this question:

Carbon dioxide is heavier than oxygen and nitrogen still it does not form the lower layer of atmosphere. Why?

As we all know, the Earth's atmosphere is dynamic, and the gravity of the earth is relatively weak.

Convection currents carry Co2 upwards and, even in the absence of convection, there is always gaseous diffusion, resulting in mixing with air. The kinetic energy (resulting in millions of molecular collisions per second) possessed by the various molecules promotes this diffusion and they will mix quite easily, especially without any bonding forces between the various types of molecules.

Added to these processes is the very weak effect of the Earth's gravity, which is just not powerful enough to "calm down" the kinetic energy of the molecules.

If the air were perfectly still, its composition would be:

The heavier gases like carbon dioxide would have higher concentrations lower down, but could not form a lethal layer at the surface of the Earth.

However, it's not safe to assume the above processes and relative lack of carbon dioxide will always prevent the loss of life.

A limnic eruption, also referred to as a lake overturn, is a rare type of natural disasterin which dissolved carbon dioxide (CO2) suddenly erupts from deep lake waters, forming a gas cloud that can suffocate wildlife, livestock and humans. Such an eruption may also cause tsunamis in the lake as the rising CO2 displaces water. Scientists believe earthquakes, volcanic activity, or explosions can be a trigger for such phenomenon. Lakes in which such activity occurs may be known as limnically active lakes or exploding lakes. 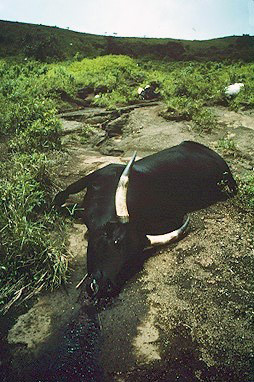 One of a number of cattle killed by a limnic eruption at Lake Nyos, Cameroon

We can occasionally prevent the buildup of carbon dioxide by degassing the body of water. 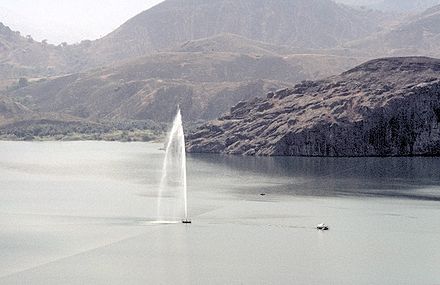 A siphon used by French scientists to de-gas Lake Nyos. The carbon dioxide emerges from its deposits and bubbles into the water, floating to the top.

It is simply because $CO_2$ is the gas which can react with other gases which is possible in upper regions as most of the gases are present in upper region only hence it remains in lower atmosphere.

Not the answer you're looking for? Browse other questions tagged statistical-mechanics atmospheric-science density or ask your own question.

3
Why do all heavier gases in the atmosphere not settle down to the surface?

7
Why is the current atmosphere made of nitrogen (75.5%)?
1
Calculated heat capacity different (lower) from experimental value?
8
How loud would a sound have to be to be heard around the world?
7
What colour would the sky of a high-oxygen, high-argon, high-water vapour atmosphere be?
3
Colors of the Aurora
2
How is temperature related to quantum vibrational states of molecules?
0
Does the atmosphere rotate slightly slower than the earth surface?
4
Can anyone explain the REAL reason why CO$_2$ increases global temperatures (not the simplistic greenhouse analogy provided for public consumption)?