Has the Landauer Limit really been overturned? What was wrong with the original analysis?

This news, summarizing results from

Makes the claim that

It clearly shows that there is no such minimum energy limit and that a logically irreversible gate can be operated with an arbitrarily small energy expenditure. Simply put, it is not true that logical reversibility implies physical irreversibility, as Landauer wrote.

The results of this experiment by the scientists of NiPS Laboratory at the University of Perugia are published today in Nature Communications. They measured the amount of energy dissipated during the operation of an "OR" gate (that is clearly a logically irreversible gate) and showed that the logic operation can be performed with an energy toll as small as 5 percent of the expected limit of kBT ln2. The conclusion of the Nature Communications article is that there is no fundamental limit and reversible logic is not required to operate computers with zero energy expenditure.

First of all, is this for real?

If so, what was wrong with Landauer’s analysis?

I'm not completely confident that I am understanding their claim, but I will risk a comment anyway. There is one obvious question that comes to me and doesn't appear to be directly addressed in the paper. 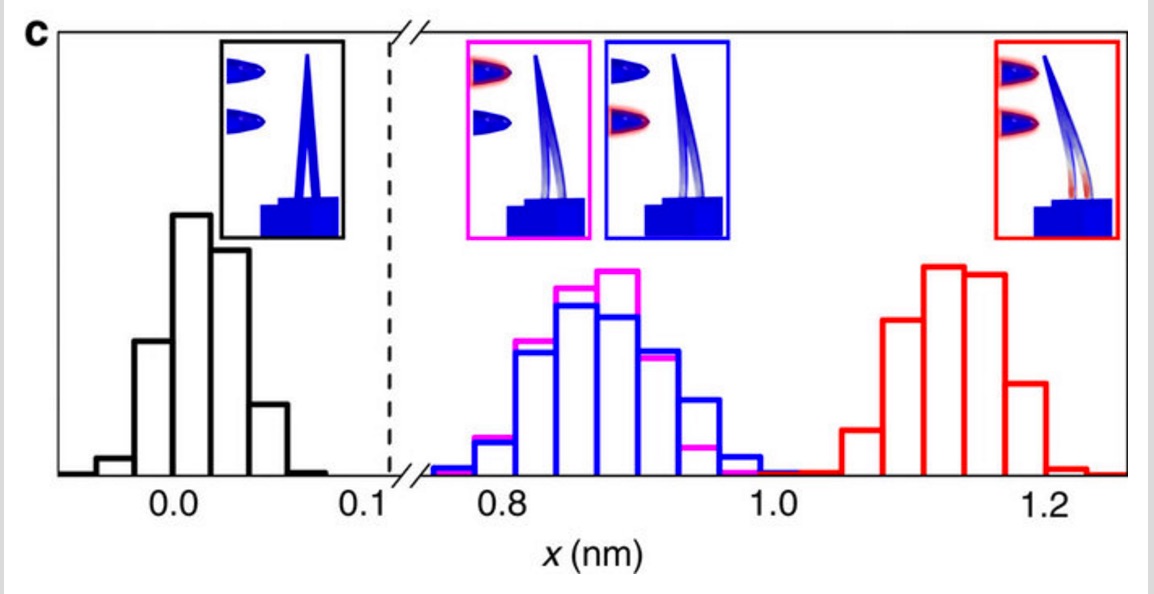 It is a little cantilever which can be pulled about the same amount by two electrodes, which are the two inputs to the gate, and when both electrodes are on it is pulled around 1.5x as much. Then they say that if you set the digital logic threshold just above the position when it's not being pulled, it is an OR gate.

Formally this is true, but in reality you can't just tell your circuit "this is the threshold, and you are to regard these two signals as identical." You have to have something else that actually takes those two different outputs and has the same reaction to either of them. This is the step that would require some sort of erasure and be subject to Landauer heating.

As such, it seems to be that if you tried to scale this type of gate up you would end up with a dilemma:

Of course, this does not preclude this sort of reversible digital scheme from having some sort of specialized application at a smaller scale. not to mention its utility in clarifying exactly what the Landauer limit really does and does not say. But for a scalable computer, I'm not sure that the claims they make are really justified.

I think I am agreeing with the content of Cort Ammon's answer.

I think the paper's "error" is to focus on the notion of energy needed to operate the gate. I agree that this can be done with arbitrarily low energy - that is very clear.

However, as far as I understand, this is not what Landauer is about: it's the fact that the "forgotten" gate state must wind up somehow encoded in the quantum state of the system (because the laws that govern it are microscopically reversible), thus increasing the latter's entropy that is the crux of the matter.

One then has to input work to throw this excess entropy out of the system and restore the original system macrostate. If one tried to pull the "trick" of the paper off repeatedly, one would indeed seem to defeat Landauer's principle in the short term. But the hardware of the system would become more and more thermalized as the experiment were repeated and the computer would cease to work.

Edit: my first answer was wrong.

What this paper appears to be doing is creating a reversible element which is being treated logically as an irreversable OR. Because the element itself is reversible, it can easily avoid Landauer's principle.

As best as I can tell, this has been known for a long time: you can have a combination circuit of reversible logic, and you only pay the energy cost for the measurements taken at the end of the process (which must latch, so are subject to Landauer's principle).

Not the answer you're looking for? Browse other questions tagged entropy computational-physics or ask your own question.