Can a television detector van REALLY tell if you have the TV switched on? [closed]

In the UK, it was regularly advertised by the BBC, and the Post Office, that they had vans that could check if your TV was on, even if you were in an apartment block full of other people's TVS. 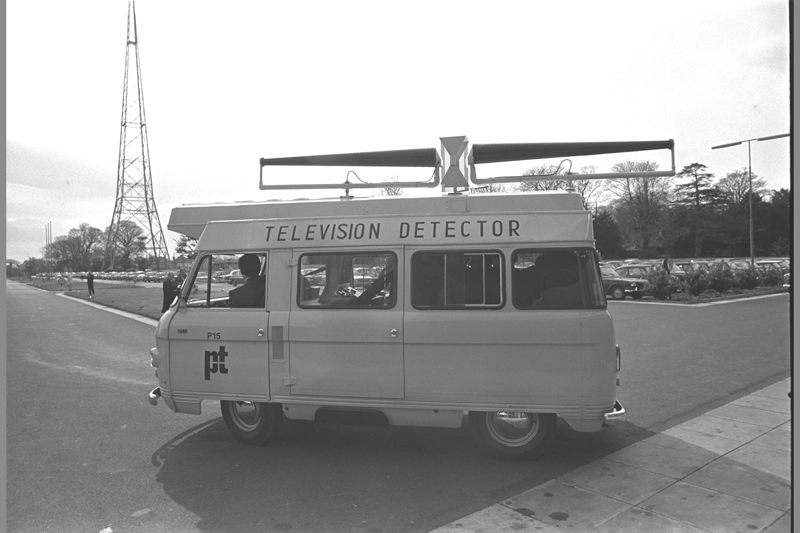 Apart from now being able to pay my TV licence :), what really prompted this question were these quotes from:

Britain's ad-free BBC, renowned for the quality of its news and television broadcasting, is funded by an annual fee on television use. But it's also famous for its sinister TV Detector Vans, which legend has it can tell if unlicensed televisions are in operation behind closed doors.

The beeb's (BBC for non brits) secret sauce will remain secret, however, as Britain's Information Commissioner has swatted down a Freedom of Information request for information on the size of the BBC's van fleet and the technology used. (As of 2016)

The BBC explained that the number of detector vans in operation, the location of their deployment and the frequency is not common knowledge. It relies on the public perception that the vans could be used at any time to catch evaders. This perception has built up since the first van was launched in 1952 and has been a key cost effective method in deterring people from evading their licence fee. The BBC state that to release information which relates to the number of detection devices and how often they are used will change the public’s perception of their effectiveness. If the deterrent effect is lost, the BBC believes that a significant number of people would decide not to pay their licence fee.

So my question is, was my Post Office and State TV lying to me? Can a television detector van REALLY tell if you have the TV switched on

No, they were not lying to you.

Televisions depend on electronic circuits which resonate with the signal coming in so as to decode it.

TV receivers are also small antennas. The incoming signal resonates on the circuits and this creates a secondary pulse, which will re-radiate in a different direction from the incoming signal, just because of the nature of circuits and an antenna. When a TV is tuned to a carrier frequency it also re-radiates it more or less in all directions from its receiving antenna. From this, sensitive detectors can detect the location of the TV's receptor antenna if it is active.

Agree with Anna. The part of the signal that is radiated outwards is the local oscillator (LO) signal. That determines what freq you are tuning to. There are isolators and other components (e.g., one way amplifiers, switches, filters, etc) that will bring that signal down before it gets to the antenna, but not all of it. That LO is used in the mixer to down convert the incoming signal, so it can also follow that same path out (to some extent). If the LO is heavily filtered, a harmonic or cross term can be used.

TVs don't have to be highly isolated, and the LO signal is such a narrow bandwidth you can use narrowband filters to reduce the noise enough and get a high enough SNR. And by the way, those vans or whatever can have directional antennas to additionally increase the SNR.

I understand that that used to be the main way to do TV polls, but nowadays enough people agree to have a device that reports it.

This is explained in detail here

In other words, the resistance of the load circuit must match the radiation resistance of the antenna. For this optimum case, $$P_{\text{load}} = P_{\text{rad}} = \frac{V_0^2}{8 R_{\text{rad}}}=\frac{P_{\text{in}}}{2}.\tag{1108}$$ So, in the optimum case half of the power absorbed by the antenna is immediately re-radiated. Clearly, an antenna which is receiving electromagnetic radiation is also emitting it. This is how the BBC catch people who do not pay their television license fee in England. They have vans which can detect the radiation emitted by a TV aerial whilst it is in use (they can even tell which channel you are watching!).

7
Cell phone ring made nearby speaker to create strange noise

131
If you view the Earth from far enough away can you observe its past?
2
Where can you get a photon detector?
9
Can you tell just from its gravity whether the Moon is above or below you?
2
Can we have light through out the house with out light being switched on for all the time?
4
Why does a non-contact voltage detector light up when you touch a plasma ball with the other hand?
1
Doesn't Planck's formula $E=h*\nu$ tell us that all light waves have the same amplitude?
3
How can a neutrino detector tell the difference between the three types of neutrinos?