What are convection cells?

I am not able to understand what really are convection cells. Here is a photo from hyperphysics, 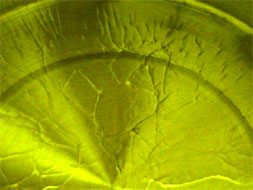 Convection cells are visible in the heated cooking oil in the pot at left. Heating the oil produces changes in the index of refraction of the oil, making the cell boundaries visible. Circulation patterns form, and presumably the wall-like structures visible are the boundaries between the circulation patterns.

What do they mean ? with that wall like structures? If possible please also try to explain to me from this picture of the sun below- 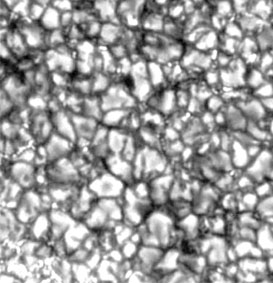 The lines in the heated cooking oil are Rayleigh–Bénard cells, while the structures on the surface of the Sun are the boundaries of solar granules. They both, however, arise from the same phenomenon: convection.

In general, hotter pockets of fluid expand against colder pockets of fluid. Think about the ideal gas law: $$PV=nRT$$ where $P$ is pressure, $V$ is volume, $n$ is the number of moles of the substance, $R$ is a constant, and $T$ is temperature. Alternatively, think of it in terms of density, $\rho$: $$P\sim\rho T\to\frac{P}{\rho}\sim T$$ As the temperature rises, so must $P/\rho$; therefore, the fluid expands. It becomes less dense. This means that the pocket will rise up above the colder fluid. Think about an oil spill in the ocean. In general, oil is denser than seawater (there are exceptions in freshwater); thus it floats to the top. The same is true in the case of cooking oil and the Sun. Buoyancy acts to counter the force of gravity.

In the case of the Rayleigh–Bénard cells, the ideal gas law isn't our best choice for an equation of state. We can approximate the temperature-density relationship by writing $$\rho-\rho_0\approx-\rho_0\alpha(T-T_0)$$ where $_0$ denotes the reference temperature and pressure and $\alpha$ is a chosen constant. This is sometimes called the Boussinesq approximation.

Once the heated material reaches the top of the fluid, it cools, and eventually moves back to the bottom to make room for newly heated fluid. The lines in the cooking oil are the boundaries of the Rayleigh–Bénard cells, where cool oil begins to sink downward while hot oil rises to the top through the center of the cells. The same thing is at work in the solar granules; the dark patches represent the cooler spots where (relatively!) cooler gas moves downward.

Not the answer you're looking for? Browse other questions tagged thermodynamics astrophysics convection or ask your own question.

10
What is the frequency of occurrence of stellar classifications off the HR main-sequence?
3
Can convection cells evolve in stably stratified fluid?
1
Single story, hotter outside, some shade from porch, enough to cool house with/without air flowing?
2
Physics of boiling an egg - what am I missing? (heat capacity and coagulation question)
3
Don't we know how the magnetic field of the Sun is created?
23
Melted chocolate forming fractal branches
0
How/Why does heat radiation work, atomically?
0
What is oscillatory convection?