Does the density of a rocket exhaust relative to the outside air effect the thrust?

For example, if the rocket exhaust was lighter than the outside air, would this give more thrust(since the exhaust should not "sink" in the air)?

For example, if the rocket exhaust was lighter than the outside air, would this give more thrust (since the exhaust should not "sink" in the air)?

A short answer to this question is that the exhaust of a liquid rocket engine is actually less dense than the atmosphere, but the reason you state above is not one of the factors involved in launching a rocket and it makes no real contribution to engine thrust.

If you look at this Rocket Engines Wikipedia page, you will that there are a large numbers of parameters that determine how efficient a rocket engine is.

Space demands that we ignore the effects of nearly all of these parameters in favor of answering your particular question,

Using the space shuttles main engines as an example, rocket propellents require a high specific energy (energy per unit mass), because ideally all the reaction energy appears as kinetic energy of the exhaust gases. Exhaust velocity is the single most important performance parameter of an engine, on which vehicle performance depends. 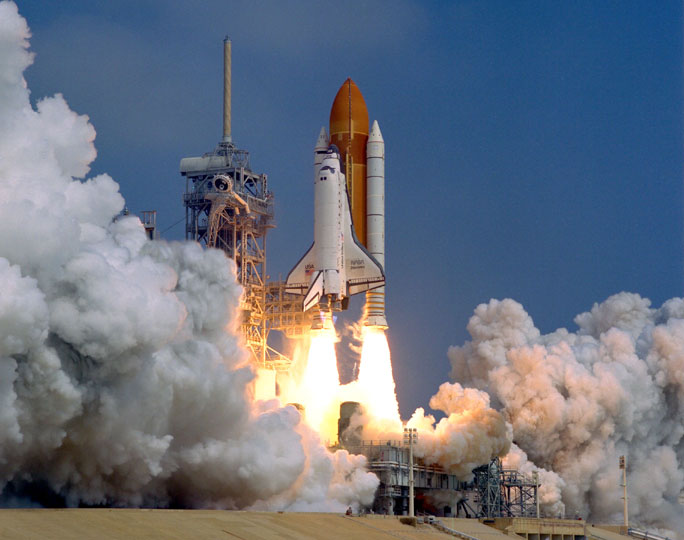 Most of the exhaust in this picture of a Space Shuttle launch is steam.

So, by choosing the propellents they did, on the basis of maximum performance, the question of the density of exhaust products compared to the density of the air was not a concern of the designers, as although exhaust density was low, due to the high speed at which it was ejected, the volume by density output of the engines resulted in a large amount of mass being ejected per second.

Liquid hydrogen (LH2) and oxygen (LOX, or LO2), are the most effective propellants in terms of exhaust velocity that have been widely used to date, though a few exotic combinations involving boron or liquid ozone are potentially somewhat better in theory if various practical problems could be solved.

As @CountTo10 said your question is not really a design consideration. But for curiosity's sake your question deserves an answer.

Not the answer you're looking for? Browse other questions tagged classical-mechanics density rocket-science propulsion or ask your own question.

2
Additional accelerating force during take off of a rocket?
7
Will a rocket produce more thrust if fired in air, rather than vacuum?
0
Can a nozzle increase the thrust of a water rocket?
0
How does a rocket's exhaust gas' momentum propel a rocket?
5
Water bottle rocket: Where does the energy go without water?
0
How to calculate the thrust of a rocket with relativistic exhaust
1
How does rocket thrust work?
3
Is a rocket engine most efficient when its velocity is equal to the exhaust velocity?
1
Should negative pressure-thrust increase or decrease the nozzle-exit velocity of a rocket?