Does cosmic activity outside our observable universe affect us?

I am not a scientist or physicist, but i was wondering if the cosmic activities or events which might be on a super massive scale happening outside our observable universe, also affect us?

Like the gravitational waves is due to black holes, which affects us. Can/are there any such events happening outside our observable universe which do affect us?

This answer based on a phenomenon literally on the edge of the observable universe (and therefore physics as we know it, as we can't test anything beyond that region.). I only use it to illustrate how little we know about the non observable universe and how much we depend on evidence gathered within our "bubble" to check the validity of speculative hypotheses.

I don't disagree with anything Martin has said in his answer, this answer is speculation, nothing else. 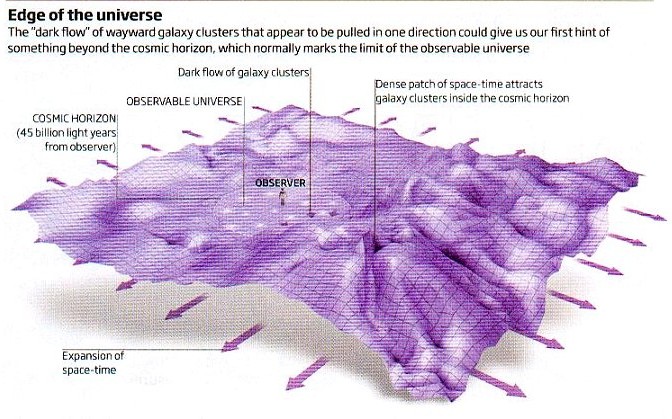 In 2008, astronomers discovered something very strange and unexpected – galactic clusters were all moving along at immense speed, over two million miles per hour, in the same direction. Theories to explain this included the rather obvious suggestion that massive structures outside the observable universe exerting gravitational influence.

However, this would go against the homogenous, isotropic nature of the visible universe, that is it looks and acts the same on the large scale, so this Dark Flow idea would need to explain that change in our ideas .

As for the structures creating the attractive forces, they could be huge accumulations of matter and energy, or even bizarre warps in space-time that are funneling gravitational forces from other universes. We simply don’t know what these massive objects could be.

I certainly don't put this forward as any sort of serious idea, I only want to illustrate how much we depend on evidence before coming up with ideas to explain phenomenona that likely have a simpler explanation and (paradoxically I suppose) also to emphasise that everything we know about the universe is based on what might be a tiny part of it. 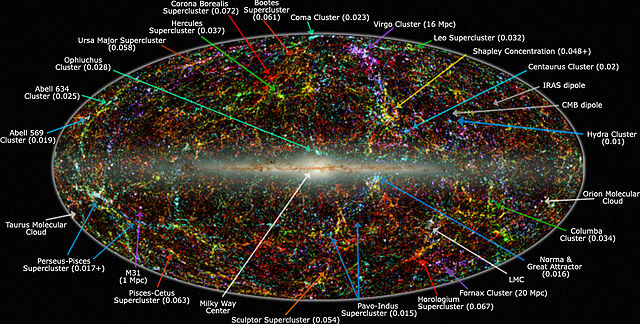 Panoramic view of galaxies beyond Milky Way, with Norma cluster & Great Attractor shown by a long blue arrow at the bottom-right in image near the disk of the Milky Way.

Dark flow is an astrophysical term describing a possible non-random component of the peculiar velocity of galaxy clusters. The actual measured velocity is the sum of the velocity predicted by Hubble's Law plus a possible small and unexplained (or dark) velocity flowing in a common direction.

According to standard cosmological models, the motion of galaxy clusters with respect to the cosmic microwave background should be randomly distributed in all directions. However, analyzing the three-year Wilkinson Microwave Anisotropy Probe (WMAP) data using the kinematic Sunyaev-Zel'dovich effect, astronomersAlexander Kashlinsky, F. Atrio-Barandela, D. Kocevski and H. Ebeling found evidence of a "surprisingly coherent" 600–1000 km/s flow of clusters toward a 20-degree patch of sky between the constellations of Centaurus and Vela.

In 2013, data from the Planck space telescope showed no evidence of "dark flow" on that sort of scale, discounting the claims of evidence for either gravitational effects reaching beyond the visible universe or existence of a multiverse. However, in 2015 Kashlinsky et al claim to have found support for its existence using both Planck and WMAP data.

This is a tricky question. It depends heavily on what exactly counts as an activity or event. The obvious short answer is No. It's called the observable universe because it contains all that is observable by us. Anything outside of it is unobservable and, thus, can't influence us (else, we could use that influence to observe it). But how often is the obvious short answer the complete and correct answer? Correct; sometimes. But this is not one of those times. On to the long answer:

The reason I said it was tricky is because there are elements of the universe that are larger than our observable chunk that can influence us ("larger" may not be the right word. At least, they extend to scales larger than the observable universe). I'm going to present a few examples of things that may be considered as something outside the observable universe influencing us. Some of these are purely theoretical, some are from observations. This is not a comprehensive list and whether or not they count as examples is up to the reader (which is why I started by saying this is a tricky question).

The first example I could provide is a collision with a bubble universe. This is purely theoretical, but in the realm of eternal inflation, it's possible to have multiple "universes" (really, just regions that behave similar to our own universe) form out of the background and, if they form close enough together, you can get a collision between these two bubble universes (See below for a technical side note on bubble universes). This influences us in ways that we haven't fully explored, but we would expect to see it for the most part in the Cosmic Microwave Background (CMB). This would arguably be something outside our observable universe affecting us (or at least causing a theoretically observable effect).

Something a bit more probable is the primordial background perturbations in the universe. Before inflation (if it actually happened), there were inhomogeneities that influenced the flow of energy and the density of the universe. Inflation theoretically then expanded the universe to the point that these inhomogeneities were so much larger than the observable universe that they can no longer influence us. However, that initial influence remains in the density of matter/energy of our observable universe. We have no way to compare our region's flow and density to other regions, but if some of our best theoretical models are correct, we can be reasonably sure that these perturbations (not talking about the quantum fluctuations, which are smaller than the universe) have influenced us and most likely made us different from some other parts of the universe as a whole.

Okay, now let's talk about something we know influenced us. A long time ago, there were structures in our observable universe (galaxies, clusters, filaments, etc) that are no longer observable (expansion moved them outside the observable universe). These structures could and, in some cases, did have an affect on the flow of our galaxy cluster, the formation of objects around us, or even the matter content of our local region (not being an astronomer or a time traveler, I can't tell you exactly what one galaxy cluster 9 billion years ago did, please forgive me). Being outside the observable universe, these things no longer directly affect us, however, they can still indirectly affect us through the affects they had in the past. This is very similar to the "dark flow" discussed in one of the other answers. It's up to you whether or not that counts.

I know what you're thinking; "All those things are fairly sketchy and I'm pretty sure I want to argue with you about whether they are real and whether they actually count as things from the outside affecting us". Yes, I somewhat agree with that sentiment. This is why it's tricky. The issue is debated among cosmologists. You asked if anything outside the realm of what we can observe can affect us. Naturally, the answer isn't going to be "Yes, here's this example of something clearly affecting us" because then it wouldn't be outside the realm of what's observable. If you're willing to allow indirect effects, theoretical and subtle effects, or strictly non-measurable effects, then I can give you a yes. If you want to stick to significant and measurable effects with determined causes, then I'm going to have to give you a "No". Even dark flow is uncertain. We don't know for sure what the cause is, whether it is from outside the observable universe, a coincidence, or something else entirely. A tricky question. But I'm just here to provide information, it's up to you to choose if the information leads to a "Yes" or a "No" answer.

*Technical side note: We aren't talking about actual bubble shaped universes with a geometric center. The universes start as infinite in size, but the math is done is a frame where graphing it makes it look like a bubble. It is basically a hyperbola centered on a time-like axis but the space-like slices are themselves hyperbolas. At right angles to time, it looks like a bubble forming, but moments of equal time always show each universe as infinite.*

If you consider entanglement and or wormholes, there is no such thing as completely isolated object (from multiverse perspective which some theorists consider to be the result of String theory )

They all depend on each others. Nothing is completely isolated from the rest. The isolation is only because of the physical model that one uses.

Since I have received unfairly negative votes, I've decided to update with Leonard Susskind vison:

Leonard Susskind, professor of theoretical physics at Stanford University, and one of the founders of string theory, has proposed a new equation that may have an equally transformative effect. What is it? ER=EPR.“ER=EPR” promises to reconcile general relativity with quantum mechanics.The letters in the equation actually stand for the names of a few heavyweights from the world of physics. “ER” means Einstein and Nathan Rosen, and, in particular, evokes a 1935 paper they wrote describing wormholes (aka “Einstein-Rosen bridges”), which are essentially tunnels between different times and spaces in the Universe. “EPR” stands for Einstein, Rosen and Boris Podolsky, who together wrote another seminal 1935 paper, this time on quantum entanglement, the proposed phenomenon whereby “entangled” particles can influence each other at great distances. You might’ve noticed that Einstein is on both sides of this equation, a testament to the influence his ideas continue to have on physics. However, neither Einstein nor his co-writers, saw their papers on wormholes and quantum entanglement as describing the same thing. But that is exactly what Susskind is proposing.

And from Einstein himself, regarding the electric ER bridge : The Particle Problem in the General Theory of Relativity - E.Einstein,N.Rosen - July 1935

If in Eq.(8) (with m = 0) one replaces r by the variable u according to the equation

This solution is free from singularities for all finite points in the space of two sheets
---
The four-dimensional space is described mathematically by two congruent parts or "sheets", corresponding to u > 0 and u < 0, which are joined by a hyperplane r = 2m or u = 0 in which g vanishes
---
e = electric charge
ε = electric permittivity
c = speed of light
ds = proper time
θ = angle 1
Φ = angle 2
r = radius
t = time
Ε = (e2G/(πεc4))

ONE MORE THING: That being said PLEASE DON'T VOTE NEGATIVE IN 30 seconds something that is someone's lifetime work ! How can you give a negative review without thinking carefully and for a long time ? Without open-minded view there will be no breakthrough in physics and we will only be building guns and nukes.

"And yet it moves" - Galileo Galilei

Not the answer you're looking for? Browse other questions tagged cosmology universe causality observable-universe or ask your own question.