What physical phenomenon best explains the region of very short half-lives on table of nuclides? 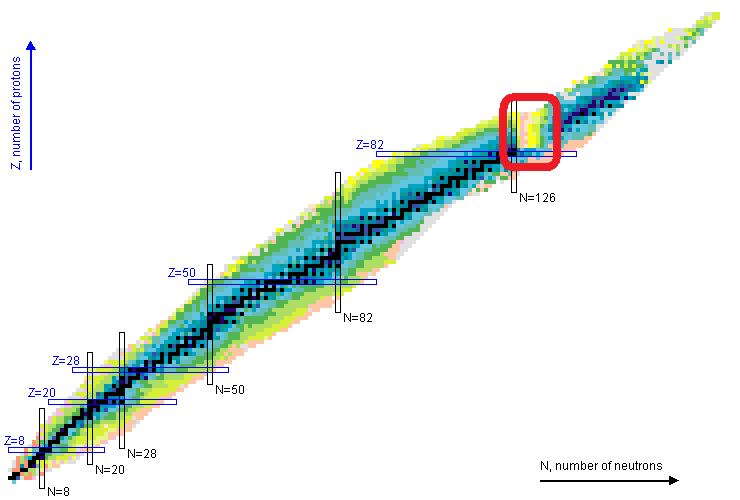 On the nuclide chart, this "gouge" is plainly visible from like a mile away. :-) I'd like to think of it as an "island of instability". From a nuclear physics perspective, What phenomenon best explains this?

It is somewhat ironic that this "Island of Instability" would occur just after one of the most stable large nuclei, i.e. $Pb^{208}$. $Pb^{208}$ owes its stability to the fact that it is doubly magic (consisting of closed shells of both neutrons and protons). These doubly magic systems are spherical and when they occur near the line of beta stability (as is the case for$Pb^{208}$) their stability is further enhanced. So what could explain the marked instability of the nuclei immediately following?

The answer to this question requires some fine details of the nuclear shell model and specifically the nature of the neutron and proton orbitals that are being filled in this region. If one looks at the ground state spins of both $Pb^{209}$ and $Bi^{209}$, one sees that they both have spin $\frac92$. From calculations that I performed for my PhD, these orbitals are likely to be $0g\frac92$ and $0h\frac92$ respectively for the neutron and proton orbitals. The unique thing about this situation is that both of these orbitals have very high orbital angular momentum (4 and 5 respectively).

When extra neutrons and protons are added to a spherical core, the pairing force acts to render the lowest total nuclear spin possible. For even-even nuclei the ground states are always spin 0. The high angular momentum of the orbitals following $Pb^{208}$ means that these paired entities will form on the nuclear periphery (forced there by the high angular momentum barrier). That means that $\alpha$ decay (for even-even systems) will be more probable in this region than would be the case if either or both of the pairing orbitals had lower angular momentum. As the comments have indicated, these are mostly $\alpha$ emitters, so the enhanced instability is to be expected.

Not the answer you're looking for? Browse other questions tagged nuclear-physics radioactivity isotopes half-life or ask your own question.

5
Why do they consider radioactive matter with long half lives more dangerous than matter with a short half life?
2
What is the half-life threshold for an isotope to be considered stable?
6
Can we predict the half-lives of radioactive isotopes from theory?
0
What physical quantity can be deduced from an activity vs. time half-life decay graph?
6
What are the longest half-lives we can detect experimentally? What stops us going further? Are we trying to?
1
Calculate the probability that a radioactive nucleus will have decayed after the passage of three half-lives
2
Measuring very long half lives accurately
3
Physical limit for the shortest possible half-life?
4
What sets the half life of unstable nuclei/nucleons?
8
What is the Half-Life of a Large Chunk of Fissile Material?