How do neutrinos pass through the sun so quickly?

If it takes thousands of years for light to escape our sun then how can neutrinos generated in the very center of the sun reach earth in just 8 minutes? Why is their speed so great that they can easily escape the pull of the sun at near light speed?

Solar neutrinos originate from the nuclear fusion powering the Sun and other stars. The details of the operation of the Sun are explained by the Standard Solar Model. In short: when four protons fuse to become one helium nucleus, two of them have to convert into neutrons, and each such conversion releases one electron neutrino. The Sun sends enormous numbers of neutrinos in all directions. Each second, about 65 billion ($6.5\times 10^{10}$) solar neutrinos pass through every square centimeter on the part of the Earth that faces the Sun.[8] Since neutrinos are insignificantly absorbed by the mass of the Earth, the surface area on the side of the Earth opposite the Sun receives about the same number of neutrinos as the side facing the Sun.

Just to supplement Sean's answer, neutrinos interact through the weak force. This results in the neutrino having to get very close to another particle before it can intact with it, as the weak force has a very short range. The mass of a neutrino is estimated to be $0.320 ± 0.081 eV/c^2$ (sum of 3 flavors) and this explains their speed, approaching that of light, and also the fact that gravity has very little effect on such a tiny mass. 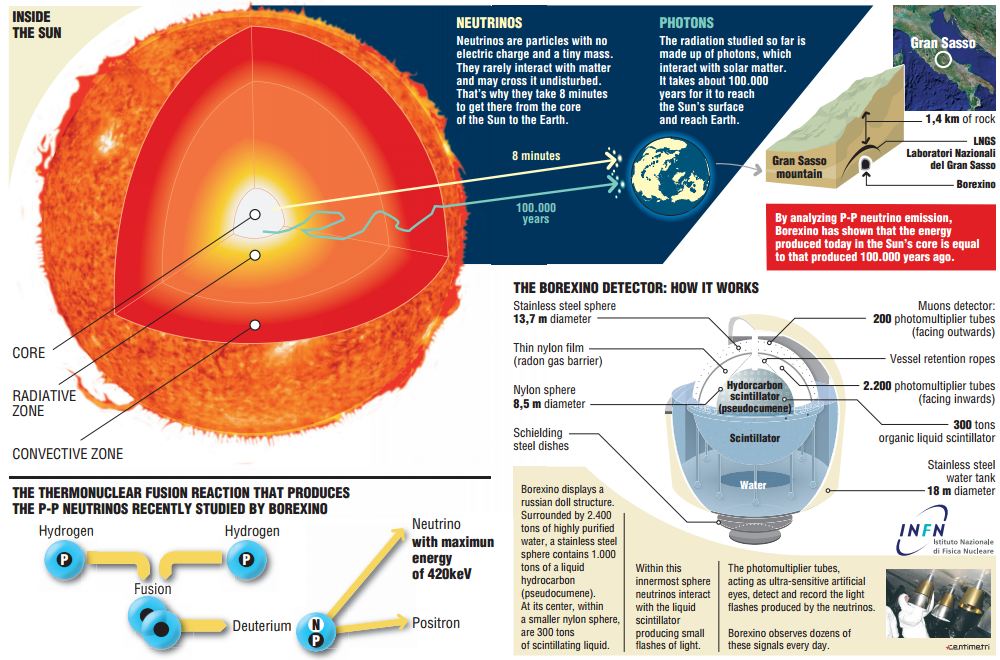 Light takes a long time to escape not because the sun is particularly large but because they run into a lot of electrons and protons on the way. So the light is taking a path that is more like a drunkard's walk than a straight line. With neutrinos, though, they interact very rarely. A typical neutrino can pass through more than a light-year of lead before it runs into anything. The only reason we detect any neutrinos at all is because there are so many of them that even events that are rare happen a few times.

You write "it takes thousands of years for light to escape our sun". This statement could easily be misunderstood. Let's make sure we understand it same way.

You take a look at the Sun (use dark goggles!). Some photon from the sun reached you eye. It took about 8 minutes for this photon to travel from the surface of the sun to your eye, not thousands of years. Neutrinos need same time to travel from Sun to Earth.

What happens to photon which was born deep inside the Sun, in the regions where nuclear reactions take place and neutrinos are born? This photon would not get out at all. It will be absorbed by Sun's material, that's all. Then the material would emit other photons, absorb them, move around the Sun, etc. The process of energy transfer from Sun's core (where nuclear reactions heat it up) to surface is complex and interesting. And quite long (thousands of years). But this is NOT the time of life of single photon traveling from inside the Sun.

Gravity is an extremely weak force. Note how easy it is for you to throw a ball upwards - counteracting the pull of the whole planet with scarcely any effort. While the escape velocity of the Sun's "surface" is very rough with respect to the spaceships we have, it's tiny compared to the speed of light.

Light always travels at the speed of light - almost all of the visible light from the Sun that reaches us has been created in the photosphere, not in the core (where fusion occurs). Even the highest energy photons are absorbed or scattered almost immediately in the hot dense plasma. This is a good thing for us - the photons created in the core are all well in the "gamma range", while the ones radiated from the photosphere are mostly visible and infrared.

The "it takes thousands of years for light to escape our sun" is a bit misleading, and certainly confusing if you don't have a decent quantum physics footing. It doesn't literally talk about a little ball being produced and then travelling at the speed of light for thousands of years before it travels the distance of less than a light second. It just takes a lot of time for the energy to propagate through the bulk of the Sun (two main processes are important here - absorption + radiation, and convection), in some ways similar to how it takes a lot of time for Earth's heat to propagate all the way to the crust - and yet you wouldn't say that the (infrared) light took "thousands of years to get from the core to the crust". It didn't - it just wouldn't have been emitted if the heat wasn't released that long ago in the first place.

The deal with neutrinos is that they have very little interaction with anything even at the large densities of the Sun's core (about 150 times the density of water under standard atmospheric pressure on Earth); only a tiny fraction of the neutrinos produced is actually absorbed on their way out of the Sun, so they do actually travel the distance in "a straight line" - and with their speed very close to the speed of light, it's a very short time indeed. That's why if the Sun magically stopped all fusion right now, we would know in just a few minutes, even though the change in the Sun's energy output would be very small for hundreds of years to come (though as far as I'm aware, noöne has done a full-scale simulation to see how exactly that kind of thing would proceed). Most of the interactions you work with daily are the result of the electro-magnetic force - things like touch, sight, smell... neutrinos don't interact electro-magnetically at all - they only interact gravitationally (remember how we said that gravity is a very weak force?) and "weakly" (about five orders of magnitude weaker than the electro-magnetic force). And the weak interaction is very limited in distance (unlike both electro-magnetism and gravity).

Not the answer you're looking for? Browse other questions tagged photons standard-model radiation sun neutrinos or ask your own question.

6
Could we prove that neutrinos have mass by measuring their gravitational signature?
4
How quickly do neutrinos change flavor?
6
Light formed by the sun?
3
Duration of Satellite orbit in the shadow of the Earth
1
Effect of radiation pressure on Earths orbit in large timescales
7
How much of neutrinos pass through a neutron star?
0
Will 100 km body impact with Sun produce burn for people on Earth?