My TA professor has asked me to write a homework question about the Pythagoras cup. After posting this previously I realized I should have given some more background information and not leave the question so open-ended.

The Pythagoras Cup is a vessel with a hollow column in the center that is connected to a pipe that empties out of the bottom of the cup's stand. Its design is credited to Pythagoras but I found just as many sources saying someone else designed it as he did. Anyway here are some links that give more background information. Pythagoras Cup YouTube, Pythagoras Cup Wikipedia.

Here is the question I would like to ask the students, please let me know what I can improve or if you think it's fine.

An archeologist is on a dig in Greece when they come across a pottery vessel (I copied a picture of the cross section from Wikipedia). Upon further examination of the vessel, the archaeologist sees that the inner column is hollow, with small holes on both sides and pipe going through the center of the column and emptying out the stand. The archaeologist notices that upon filling the vessel with water to the top that it drains the entirety of its contents. The archaeologist repeats this but only fills the vessel half way and observes that the water stays completely inside the vessel.

Question 1: Explain why the vessel doesn’t empty itself when it is only filled half way but does when it filled to the top. What would happen if the archeologist filled the vessel with a small amount of a denser liquid before pouring the water in?Hint: Consider the forces acting on the fluid when the water is filled to the top and when it is only filled half way separately.

Question 2: Calculate the mass flow rate of water leaving the vessel as a function of the time after it has been filled to the top. Assume that the vessel can be modeled as shown to the right (I've included a drawing I made in CAD of the cup) and that the vessel is cylindrical and the dimensions of the column are much smaller than the dimensions of the vessel. $D=4.5$ inches, $d_1=\frac{3}{4}$ inches, $d_2=\frac{1}{8}$ inches, $H=6$ inches, $h_1=3$ inches, $h_2=6$ inches, $h_3=2$ inches and $g=32.2 ft/s^2$. Hint: You may assume that the velocity of the water leaving the vessel is $V=\sqrt{2gy(t)}$ where $y(t)$ is the height of the water in the vessel measured from the bottom of the stand. The students have not been taught Bernoulli's equation yet so I gave them the velocity leaving the pipe. I also gave them more information then they need to solve the problem, the way I came up with an answer only needed $\rho$, $g$, $H$, $D$, and $d_2$. 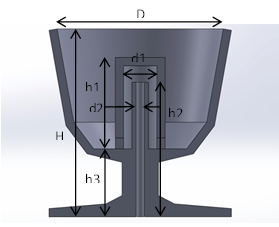 Please let me know what I can improve on.

Based on only the information you supplied (not including the wikipedia link), I found it difficult to picture what exactly it was you were trying to describe. I would consider adding an image similar to the one below from wikipedia (or maybe you already did?):

In addition to clearly showing the different states of the system, the channel from the inside to outside of the cup is very clear. In contrast, the channel in the CAD drawing you supply looks... Discontinuous? There's a solid line separating the tube in the stand from the portion in the inner column, and the inner column looks sealed off from the portion from where the liquid sits. Perhaps this could be made clearer without the gradients, and instead opting for a solid black-white-grey color scheme.

Also, given the somewhat bizarre nature of this device, it might be worth calling it out by name in the problem. It would make question 1 easy to google, but it would be helpful those struggling with visualization to have something to look up. Plus, the bulk seems to be in question 2 anyways.

Other than the visualization issues, I think you are in good shape!

For clarification, I have included a crudely modified CAD drawing below. 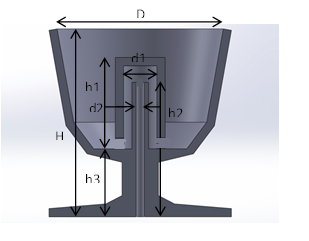 Not the answer you're looking for? Browse other questions tagged homework-and-exercises fluid-dynamics fluid-statics or ask your own question.

5
About an upside down cup of water against atmosphere pressure
1
Calculating pressure under water
2
Velocity of water column
1
Fluid velocity in a vertical pipe
1
Lifting submerged straw above 10m
4
How does water fill an upside down cup?