An article on ESPN Cricinfo discusses the possibility of the internal weight distribution of cricket balls having an impact on the ability of a bowler to achieve 'spin'.

In cricket, a spin bowler imparts rotations on the ball at the point of release and thereby seeks to deceive their opponent (the batter) through either (i) the trajectory of the ball through the air; or (ii) the ball's behaviour once it comes into contact with the playing surface. [The ball will, as a general rule, be delivered at an initial velocity of 80-90kph and will travel c. 15 metres after it is delivered prior to bouncing, and a further 3 metres before reaching the position in which the batter is initially situated]

In the article, a cricket ball manufacturer states:

You can change the construction of the core so that it is more conducive to spin bowling, by weighting the core more heavily in the middle. It has an effect like an ice skater on the rink: when she spins with her arms wide, she spins slowly, and as she brings her arms in, she accelerates. All she has done is bring her weight in, which has enabled her to spin faster.

Is this claim accurate?

Yes, different weight distributions in cricket balls affect how conducive they are to being spun.

How this distribution of mass is achieved can be seen in the following photo from your link. This core is made up of cork and rubber particles which have been heated and compressed. Surrounding it are alternate layers of cork bound by woollen yarn. The outer coating of the ball is made of smooth leather, but a heavy thread is used around the seam (just visible at the rim) to give the bowler enough grip to spin the ball. 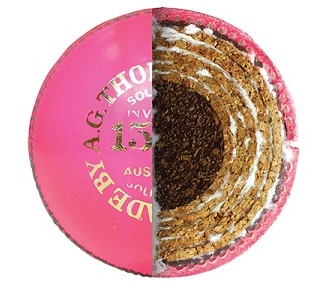 How difficult a ball is to spin - its rotational inertia - is measured by its moment of inertia (MI). For a ball of mass $M$ and radius $R$ the MI about an axis through the centre can be written as $\frac25 kMR^2$ where $k$ is a fraction depending on the distribution of mass. If the mass of the ball is distributed uniformly then $k=1$ whereas if all the mass were concentrated in a shell at the rim then $k=\frac53$. If the mass were concentrated at the centre then $k=0$.

The Laws of Cricket require the mass of the ball to be within the range 156-163g and to have a circumference of 224-229mm, but there are no restrictions on internal construction or distribution of mass. National standards (eg British Standards Institute, BSI) cover seam height, hardness and wear.

Although all balls are traditionally made of cork and rubber inside a leather cover, there is considerable variety in construction even at international level. There is usually a core surrounded by 5-6 layers of cladding which alternate cork with wool or cotton yarn. Cores vary from solid cork to solid rubber, or a mixture of the two - or none at all - which may or may not be compressed. Cladding varies between winding the woollen yarn under tension when wet (which increases the tension when it has dried) or relatively loosely (as in the image above). With these options. the mass of the ball could be concentrated in the core (easy to spin) or in the cladding (more difficult to spin). Another variation is an irregularly-shaped core - which gives the ball a preferred axis of spin.

Assuming that core and cladding densities are in the ratio $d+1$, and the radii of the core and the ball are in the ratio of $r$, and ignoring any difference between cladding and leather cover, the MI of the ball is characterised by
$k=(dr^5+1)/(dr^3+1)$.

So the moment of inertia of a cricket ball could be varied in the ratio of about $13:9$ by shifting mass from the cladding to the core.

Not the answer you're looking for? Browse other questions tagged classical-mechanics rotational-dynamics drag applied-physics everyday-life or ask your own question.

2
Why do balls in a spinning ellipsoid move to the minor axis plane?
18
How do they measure the rotational speed of cricket balls?
0
Is Conservation of Energy maintained when the orbit of a rotating mass increases in diameter?
0
Bungee balls vs. extension springs
3
Paper rectangle spinning phenomenon
1
Spinning bicycle wheel and angular momentuem
0
Weight Distribution of a Heap of Logs
0
Forces on a spinning ball