Can someone please explain what happens on microscopic scale when an image becomes unfocused on a screen from a projector lens?

My questions is basically asking when you move a projector back farther from a screen the image tends to blur unless you focus it. Logically I would think that every point(ray of light) of the image would expand proportionally allowing just a larger clear image. Instead you get a blurred image that is larger and requires focusing. My question is what exactly is happening to the light when you create a larger distance between the projector and the screen. Why can't the image just get larger and stay clear without the need to focus. Is every light ray independent? So each ray of light expands and over laps the other when the image is not focused? If so what exactly is a single ray of light and how thick is it? Am I thinking too deep about this ? Why does such a simple concept seem impossible to explain?

So, a diverging cone of rays from a point on the object hits the lens and the lens then refracts those rays so that they all pass though a point. That point is the image of the point on the screen.

Now suppose you increase the distance between the lens and the screen. Those rays from the object after refraction still converge at the same point as before and then continue onwards as a diverging cone of light that produces a circle of illumination on the screen rather than the point when the image was in focus.

This happens to rays from each point on the object and so these circles of illumination overlap one another and form a blurred image. 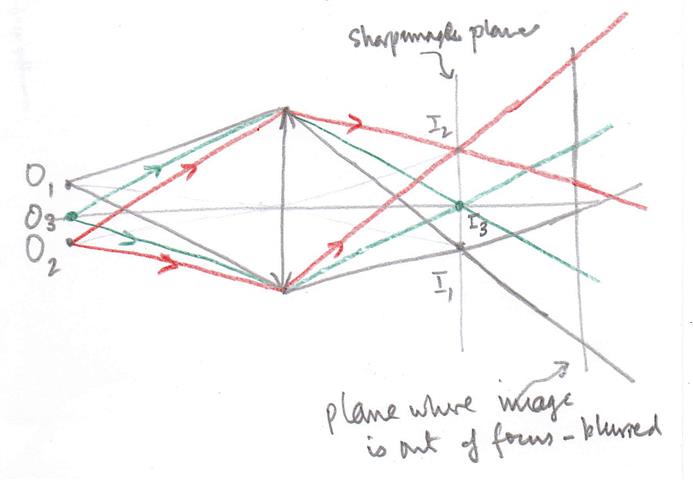 6
How do head mounted displays simulate infinite focus?
0
Limitations of (non-lightfield) near-eye displays
1
Defocusing the eye and computer monitors
4
Why do we see a blurred image when the screen is not placed at the position where the image is formed by a convex lens?
0
Why does the focusing efficiency drop with numerical aperture for a microscope objective?
0
Why are two rays required for us to see an image?