How is Carnot's theorem valid also for engines that are not heat engines?

I understood the statement and the proof of the Carnot theorem.

What I do not understand is the following. The theorem is derived for an heat engine since it regards the efficiency of a heat engine.

From here Raveau's diagrams are drawn, where only some regions are allowed, and in particular in $I$ there are heat engines and in $IV$ there are refrigerators. But this assumes that Carnot theorem is valid for a refrigerator too. 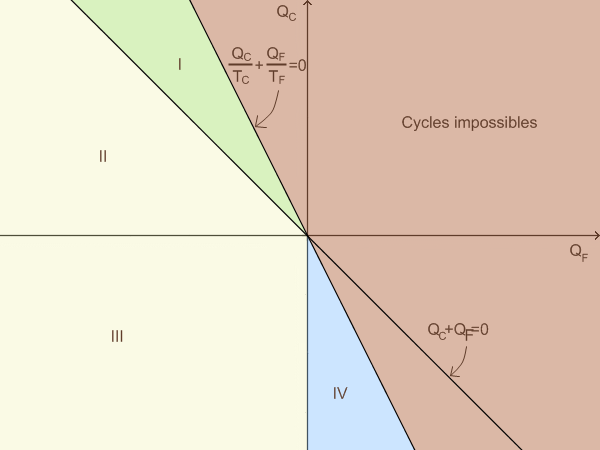 My question is: how is it possible to pass from the Carnot's theorem, proved for an heat engine to the validity of the theorem for any engine, which implies $(1)$?

My giustification would be that, for any engine I can think of a corrispondent heat engine that exchanges the same heats in absolute value. But this does not seem very clear to me and I would really appreciate any suggestion about this.

The principle is this: the most efficient process possible is one that can be run the same way going forward as in reverse without any change in the steps. Any process which cannot be reversed will involve an out of equilibrium step, and thus an increase in entropy.

It is possible to prove this without mentioning entropy, explicitly. First, imagine hooking up a Carnot engine to two heat baths, $T_H$ and $T_C$, and let it run as an engine that does work. Now, hook it up to another Carnot engine set up between the same baths as a refrigerator (ie it moves heat the other way). If you do the math right, you'll find that there is no net energy flow into either heat bath.

Now, imagine that the engine were more efficient than a Carnot engine. What happens to the first law energy balance? You're getting more work out of the engine, so you're ejecting less heat to the cold bath and the Carnot refrigerator is getting more work put into it so it's drawing more heat from the cold bath. In other words, the combined refrigerator is net taking heat from a cold thing and ejecting it into a hot thing, and having no other effect on the world. That's a violation of Clausius's formulation of the second law of thermodynamics.

Try the setup with any less efficient engines/refrigerators and your net effect will be to transfer heat from hot to cold, as you would expect.

Ok firstly, heat engines are the only kind of engines discussed in thermodynamics, so when your textbook talks about simply "an engine", they are probably using it as a synonym for heat engine. Carnot's theorem does not apply to things like an electric motor which simply turn one type of work into another, no heat involved (ideally at least). One of the reasons why electric cars can be much efficient than petrol ones is that they do not have this so called thermodynamic bottleneck.

A heat engine is defined as something that

This is all there is to it. Clearly the applies to things like the Carnot engine or a car engine, but also includes things like a refrigerator, its just that for a refrigerator it happens that $T_2 > T_1$. There is no need to invoke an "equivalent heat engine". The proof of Carnot's theorem simply never assumes that the engine was running "forwards".

Not the answer you're looking for? Browse other questions tagged homework-and-exercises thermodynamics conservation-laws ideal-gas carnot-cycle or ask your own question.

4
Irreversible heat engines strictly less efficient than reversible ones
1
Efficiency of a real engine
2
Questions on Carnot's theorem
2
Heating up water with a heat pump
1
What does the ratio of reservoir temperatures have to do with the efficiency of a heat engine?
3
Maximum efficiency of heat engines not operating between two reservoirs
1
Validity of Carnot's theorem when operating between finite reservoirs
1
Could a Carnot engine linked to a Carnot “refrigerator” create a perpetual heat flow between two reservoirs?
1
What so special about Q(heat) and not special for “X(any other energy transfer)” in non-heat engines?
0
Why does $\oint\frac{\delta Q}{T} = 0$ when evaluated over a Carnot cycle?