Whats the Induced EMF in this case?

I have taken a very long solenoid, lets suppose it of radius r 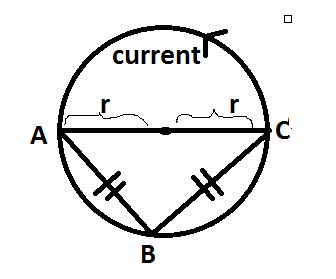 , the magnetic field changes at the rate dB/dt ,now if i tried to calculate the induced emf for the triangular circuit ABC, i need to find the flux through the area and then differentiate it, that was too easy for me to do it. this numerical problem was asked by my teacher. But i wondered what will be the induced emf between the ends of length AB, if AC and BC were removed from the circuit. My teacher wasn't able to explain that, and he said,"your question doesn't make any sense". i want to ask ,was i really wrong about that, please explain. if there exists any solution then please make me feel good that i wasn't wrong.

What you & your teacher may have meant

You're not wrong but your question is definitely less easily answerable than your teacher may have liked.

An EMF $\mathcal E$ is a line integral of an electric field $\vec E$ over some curve $\mathcal C: \vec r_0 \rightarrow \vec r_1,$ $$\mathcal E = - \int_{\mathcal C}\rm d\vec\ell\cdot\vec E.$$Of course for conservative fields $\vec E = -\nabla V$ for some voltage function $V$ and then you have $\mathcal E = V(\vec r_1) - V(\vec r_0),$ the difference between the voltages. Of course this means that the EMF around a closed loop is 0, which is another way of saying that induction is non-conservative and cannot be described with a voltage function (an "electric potential", if you're more familiar with that term).

Because of this, your teacher may have thought, "well, I don't have a well-defined voltage so I cannot subtract two numbers, so the EMF between two points doesn't make sense!"... but this is wrong, the definition I've given above does work for any two points regardless of whether the electric field is conservative or not; and the only subtlety about nonconservative fields is that you have to specify the curve $\mathcal C$, which you appear to have done! So your question does make sense, don't let your teacher tell you otherwise.

Your teacher might also have meant "once we put an actual current loop in the middle of this it's going to change the fields, like if it has a resistor in series with a conductor then most of the field in the loop is going to be concentrated wherever that resistor occurs in the loop, so calculating the EMF between two points doesn't mean much unless we put a loop into this circuit." That is also very true. For the rest of this answer you will have to imagine that we are not going to insert any actual components, but just answer the question of "what does the above line integral say?" -- and for that we need the fields created by the solenoid.

Now to actually answer the question we have to figure out what the electric field is inside of the solenoid. This is not so easy and there are a lot of assumptions which go into it: for example the Maxwell equations allow for additive constant fields, like an electric field that goes out to infinity of some constant magnitude at every point, all pointing along the same axis as Earth's magnetic field. Why would you have this? I don't know. You might not! Or maybe your laboratory is situated inside a giant capacitor and you do! The Maxwell equations just tell us "hey, you need to specify boundary conditions," and don't tell us what they are!

BUT, you can skip all of those steps with some physicist's intuition: $\hat\varphi$ is orthogonal to the topmost branch of the loop (the one that spans the diameter of the solenoid), which means that along this part of the loop $\rm d\vec\ell\cdot\vec E$ is zero. Therefore the EMF is trivially $\mathcal E_\text{loop} / 2$ by rotational symmetry.

Now you'll understand why I was saying that we're not inserting any actual electrical components! If you were to place wires in this chord-chord-diameter triangle you've drawn, and those wires had some constant resistivity and cross-section, the above shorthand analysis might suggest to you that the current is 0 along the diameter-wire! But of course that's not true; if the current along the chord-wires is not 0, and the current along the diameter-wire is 0, then charge will build up at these corners, creating a field along the diameter-wire, which will then push charge through it, until a constant current flows through the 3 wires. And we can shorthand-analyze that, too: then the ratio of EMFs will simply be the ratio of resistances ($V = I R,$ but $I$ is constant) which will be the ratio of lengths, so the chord-wires will each have $\mathcal E_\text{loop} / (1 + 1 + \sqrt{2})$ of the total EMF, with the diameter-wire taking on the remaining $\mathcal E_\text{loop} \sqrt{2}~/(1 + 1 + \sqrt{2})$ of it, since it has $\sqrt{2}$ times the length of the chord-wires.

Not the answer you're looking for? Browse other questions tagged electromagnetism induction inductance electromagnetic-induction or ask your own question.