I came across a problem:

Consider a painter to be standing on a movable platform that is attached to rope that goes over an overhead pulley. The free end of the rope is in the man's hand. He pulls the rope with a force F so that the system is accelerated upward.

My confusion arises from the statement that "internal forces can't accelerate the system". In this case, however, the force applied on the rope by the man is clearly an internal force. Notwithstanding, the system is accelerated upward. How does this happen?

Please help! Thanks in advance :) Regards.

You are correct : internal forces do not accelerate a system. This is because all forces occur as action-reaction pairs, and every internal force is paired with another internal force. Each force in this pair acts on a different part of the system, so there is no net force on the system.

BEWARE! Some websites have a very different 'definition' of what internal vs external forces are - eg The Physics Classroom. A similar situation to your "real forces" question.

Using your example of a painter :

If "the system" consists of the man and the platform but not the rope, then it is the upward pull of the rope on the man and on the platform which (after subtracting the weight $mg$ of the system) accelerate the system upwards :
$ma = 3T-mg$.
These 3 forces $T$ - coloured blue in the illustration - are external forces.

Note that the downward pull of the man on the rope (not illustrated) is not the force which accelerates the system (man and platform), because (i) it acts on the rope, not the system, and (ii) it acts downwards, whereas the acceleration is upwards.

If "the system" includes the rope, then the pull $T$ of the rope on the man is now an internal force, and does not accelerate the system. The external forces which accelerate the system upwards are now the force $2T$ which the uppermost pulley exerts on the rope bent around it, and the force $T$ from the ring-bolt P acting on the end of the rope which is tied to it. These forces are marked in red in the illustration.

This seems strange, because the objects exerting these forces (the upper pulley, the ring-bolt) do not move upwards themselves. The point at which the force is applied does not move - so how can these forces do work on the system?! 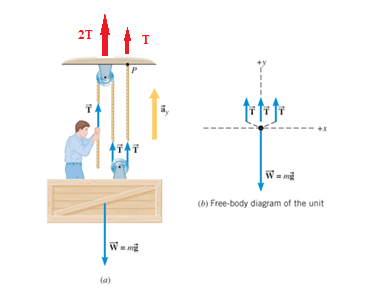 your question answers it. 'internal forces can't accelerate the SYSTEM'. Your confusion arises from the fact that you are confusing the system, and its components. If you consider the man and the platform as your system, then notice that the force of tension due to the rope tied to it, is EXTERNAL to the system and hence it accelerates. draw a free body diagram to understand it better.

Analogy The man pulling on the rope is mostly pulling on the pulley. It's similar to what would happen if you were to swing a towel over a horizontal steel bar, holding and end in each end and pulling. You are using the towel to apply a force on the bar. What would happen if one of your arms were significantly stronger? The towel might slide on one side, but you will still be able to pull yourself up!

Setting
Let the total mass of the system man and platform be $m$. Assume rope is massless. The man is holding one end of a rope that goes around a pulley fixed on the ceiling. The other end is fixed on the platform.

Thinking
Now, if the man pulls on the rope, the part of the rope that goes from his hands, around the pulley to the platform gets shorter, so the hole system must go up. There is no way out of this. As internal forces cannot accelerate the system, something else is happening. You can imagine that the effect of the man's pulling on the rope temporarily increases the force the rope exerts on the pulley, which will result in a higher tension in the rope, which will increase the force the man plus platform experience from the rope, so temporarily accelerating the system.

2
For a massless pulley moving upwards with acceleration, is the upward force equal to the downward force?
0
Laws of motion while climbing a rope
0
Free body diagram of a rope
1
Does a weight and force of same magnitude on a pulley make any difference?
0
Acceleration when pulling yourself with the help of a pulley
0
Choosing signs in free body diagrams of subsystems