From which direction does air fill up space?

When a solid object moves in the atmosphere (e.g. a plane), in which direction does air fill up the "empty space" left by the translation of the object?

Does this depends on the direction of movement of the object? (e.g. if the plane is moving horizontally, or is landing, or taking off)

PS: I am aware of this question and I think this is not a duplicate of that one.

It depends very much on the direction, shape and speed the object moving. In the case of a plane even in takeoffs and landing the movement is mostly horizontal. With high speeds of the object the air flows from the front of the moving object to the rear. Like in the picture below some air is trapped inside the turbulent eddies behind the object if the air speed is large enough for the flow to be turbulent and not laminar (so it is replaced by turbulent mixing relatively slowly).

To further go to this case of a plane wing this picture shows quite shows what it looks like: 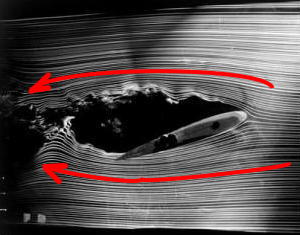 Of course this is a laboratory case and the wing is actually in a wind tunnel (wind blows around and wing is still). In real life the air flow is much more turbulent in high air speeds that in this picture, the turbulence is reduced from these kind of laboratory tests. Although this kind of test then represents reality, where the wing is moving and the air is more still, better.

These all of course hold true to other fluids (for turbulence is a attribute of flow itself and not the fluid) with different densities and viscosities when wind speed is also adjusted.

Not the answer you're looking for? Browse other questions tagged fluid-dynamics atmospheric-science air or ask your own question.

18
Which direction does air flow?

11
Which direction will Coriolis forces deflect a bubble?
4
How fast would an object have to move to create a vacuum behind it?
2
What might cause water vapor to move against the flow of air in an enclosed space?
1
In which altitude does Rayleigh scattering produce the blue color of the sky and are density fluctuations required?
0
How does (air) pressure balance under constraints?
1
Moving an inverted hollow object from 1 surface to another over a gap. What happens to the air molecules inside object?
0
How and where does air that is displaced by a constant moving vehicle flow?