I have a 200 liter water tank 3 meters above a shower head. The tank and head are connected directly by a relatively small pipe. The shower head has an intake with a diameter the same size as the pipe leading from the tank. The water pressure coming from the head is too low.

I am tempted to believe increasing the size of the pipe from the tank to maybe two or three times of the intake of the shower will increase the water pressure into the shower.

I, like many people, use the thumb over the head of a hosepipe as method of how to increase pressure but after some reading up I have found you are trading reduced water flow for increased water pressure and in reality you have hindered the rate of water flow.

However this maybe the effect i require for the instant shower to work.

Do you think this will help? 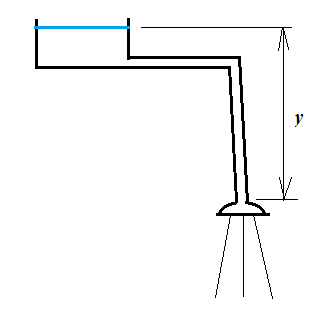 At zero flow the pressure at the shower head is simply the hydrostatic pressure given by Pascal's law:

The water pressure coming from the head is too low.

What the OP really means here is that the shower only delivers a trickle of water (low flow speed). So here I'll evaluate the factors that influence that flow speed.

When flow starts, $p$ is lowered by:

1. Viscous losses in the pipe:

Acc. Darcy Weisbach pressure loss in a straight pipe due to flow is given by:

Where $\mu$ is the viscosity of the fluid.

So for laminar flow:

Where $c$ is a coefficient that depends on the type of local resistance.

In the OP's stated problem the main local resistance is almost certainly the shower head itself.

Using Bernoulli's principle we can now write (for laminar flow):

In the case of turbulent flow (high $v$, $Re > 4000$), $f_D$ becomes a function of $v$, $f_D=f(v)$ and the calculation becomes more complicated. But the general conclusions above still hold.

What you want is increased water flow I suppose. Pressure difference between your shower head and water tank located above is a constant (approximately, if height of water in tank is much less than the height at which tank is located). So if you want greater flow rate you need to reduce the resistance to flow, and maximum resistance is offered by valves somewhere along the pipeline if they are not fully open, or may be somewhere inside your shower head.

Not the answer you're looking for? Browse other questions tagged pressure water or ask your own question.

13
Is there a way to fill Tank 2 from Tank 1 through Gravity alone?
1
Does the termination point(level) influence water flow from a pipe
2
Will changing the pipe diameter reduce the pressure head loss?
4
Does a higher water volume increase pressure?
3
What will be the pressure rise due to a freely falling water from a Tank from a 20 m height to a partially filled pipe?
3
What is the formula to determine the change in pressure when there is a change in flow?
0
What happens to water pressure if diameter of the tube is increased?