How do electrodes in a galvanic cell give up electrons

I had asked a question on chemistry stack exchange that related to this question (if you could, please check the comments) found here. The comments say that the electrode and electrolyte are not suppose to interact, but how then are electrons generated from the electrode? The electrolyte has to be responsible for transferring the electrons to the metal electrode. Am I thinking about this the right way or am I wrong?

Yes, the electrode and the electrolyte should interact, but only in specific ways.

Under a good galvanic cell, you want a reaction that cannot proceed unless electrons are moved on the circuit side. That leaves the reactants as stable as possible until you are ready to make use of the energy.

Take the anode side of this Daniell cell 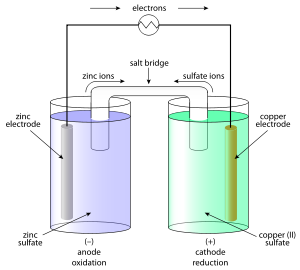 The reaction when the cell is producing current is

If you put this half-cell together without attaching it to a circuit, a few molecules will react, but very quickly the free electrons will give the electrode a slight negative charge. Since the electrons cannot leave via the electrolyte, this charge builds up. Eventually the charge is high enough that the reaction cannot continue because it would take too much energy to push additional electrons onto the charged electrode.

Note that this reaction can proceed without donating any electrons. So even with the circuit disconnected, the metal is consumed by the acid. This is not useful for your purposes. You want the reaction to halt when disconnected.

if the anode is the negative electrode in the cell, how does it give electrons because the cathode, which is the positive electrode, should attract the anions of the electrolyte which are responsible for donating electrons to the cathode and not the anode.

I think you are confusing cause and effect here. It sounds like you are thinking that the charged electrodes are attracting the charged ions. But it's sort of the other way around.

Imagine that initially everything is uncharged. In this case, the anions have a favorable chemical reaction with the anode. This reaction charges the electrode. If this charge if allowed to build (which happens when the circuit is open) it does cause the anions to stop reacting. But when the circuit is completed, this allows the electrons to migrate, dropping the charge, allowing the reaction to continue.

Not the answer you're looking for? Browse other questions tagged electricity electrons batteries or ask your own question.

0
Radiation at plate of vacuum tube
2
Why does Li+ ion move to cathode in Li-ion battery?
5
Why electrons flow through a wire connected to a battery?
0
Impact of +ive terminal of the battery on the wire (Conductor)
0
How cell drives electrons to flow in a metal wire?
1
Electrolyte and internal resistance
0
Why is the the positively charged electrode referred to as the anode in this apparatus?
1
Why is the cathode of a voltaic battery considered a positive terminal?
0
Can a voltmeter itself disturb the electrochemical potential of battery?