How big of a neutron star would be needed to form a quark star inside of it?

A quark star is a hypothetical type of compact exotic star composed of quark matter. These are ultra-dense phases of degenerate matter theorized to form inside particularly massive[citation needed] neutron stars. -Wikipedia

If you add enough mass to a neutron star it forms a black hole but how much mass is needed to form a quark star? When do neutrons and protons start to break down into a mush of quarks and gluons?

A quark star may or may not be possible - as the wikipedia page you refer to says - they are "hypothetical".

As the mass of a neutron star increases, generally speaking, it become smaller and the central density increases.

Quarks are ``confined'' within nucleons by a strong force that increases with quark separation. However, at very small separations it may be that quarks attain an asymptotic freedom where they can to first order be treated as non-interacting fermions.

At densities of $\sim 5-10\rho_{0}$ (where $\rho_0 = 2.7\times 10^{17}$ kg/m$^3$ is the density of normal nuclear matter) it is possible that the nucleons dissolve into a quark-gluon plasma, containing the lightest three quarks, u,d,s. There will then be a weak-force equilibrium between the species, which results in equal populations of each. Since the rest mass energies of the quarks are thought to be $2-150$ MeV/, they will be extremely relativistic at these densities, with a pressure that approaches $\rho c^{2}/3$. This is a soft equation of state that could not support the overlying neutron star (or indeed a star made entirely of quark matter). However, it is inconceivable that there are no strong-force interactions between the quarks (or why would nuclei have the size they do?) and these may harden the equation of state sufficiently to form a stable object with a quark matter core.

As there equal amounts of u,d,s quarks these are sometimes called Strange stars or described as being made of Strange Matter. However, these terms are more usually reserved for stars that are entirely made of such material, which is something more exotic entirely.

It is unknown whether such objects exist and therefore it is very difficult to answer your question. It may be that quark matter is just an ephemeral state on the way to the collapse to a black hole and that no quark stars in equilibrium exist. A possible avenue of exploration is that neutron stars with a quark matter core should cool more rapidly than "normal" neutron matter, because the direct URCA neutrino cooling process is feasible. It would be interesting to see whether neutron stars of different masses follow radically different cooling tracks, but those measurements are not available yet.

As @RobJeffries suggests, "It may be that quark matter is just an ephemeral state on the way to the collapse to a black hole and that no quark stars in equilibrium exist." But if there are stable quark stars, the stability mechanism that produces neutron stars may offer some theoretical clues to look for. Neutron stars are stable because of a phenomenon called the saturation of nuclear matter. That is, as more and more nucleons are added to a large nucleus the central density and average binding energy per nucleon approach constant values (discounting for the moment the repulsive coulomb forces between protons which actually leads to maximum binding in the iron region of the periodic table).

Prior to the development of QCD, an understanding of the saturation of nuclear matter was achieved via a relativistic mean field model of nuclei (see 1972 Phys. Rev. C 5 241) that is sometimes called the $\sigma$/$\omega$ model. This model resulted in a self-consistent mean field (or Hartree) single nucleon potential that was a near balance between an attractive scalar potential and a repulsive vector (time-like component) potential for a Dirac single nucleon equation. For normal nuclei the attraction is slightly greater than the repulsion leading to bound states. Both of these potentials were obtained by folding the respective nucleon densities (both scalar and vector) with the Yukawa interactions for the scalar $\sigma$ and vector $\omega$ meson exchanges.

Now the vector density is the probability density so it remains normalized to 1 for a single nucleon. The scalar density on the other hand has no set normalization, and its integral tends to decrease as the vector density becomes confined to a smaller and smaller region. That means that an external pressure (such as gravity would exert on neutron star matter as it crushes the star) would be met by an increased repulsion due to the vector meson exchange (beginning to dominate over the attractive scalar meson exchange). This would cause a supernova collapse to halt if the resulting neutron star was not massive enough to allow gravity to win and produce a black hole.

If stable quark matter stars exist, it is likely that an analogous mechanism must hold. I am not an expert on QCD, but qualitatively it would mean that after nucleon boundaries begin to break down and quarks begin to intermix in quantities larger than 3 (under the pressure of gravity), the initial increase in quark density would have to halt as even more repulsive QCD forces came into play. Quarks are already highly relativistic in this regime (much more so than the nucleons in the $\sigma$/$\omega$ model, so this is quite possible but whether it actually occurs is anyone's guess at this point.

Vuorinen joined forces with Aleksi Kurkela at ETH Zurich in Switzerland and Paul Romatschke at the University of Washington in Seattle to examine how the pressure of strange quark matter depends on its density – a relationship described by the star's "equation of state". Physicists have looked at this before, but only using highly simplified models of quark interactions. Instead, Vuorinen's group has employed perturbation theory – a technique that approximates mathematical solutions in stepwise fashion, which on the whole is far more accurate.

The result may surprise other physicists. Current thinking has it that quark stars should be smaller than neutron stars, and indeed that compact stars above a certain size – typically about twice the mass of our Sun, or two solar masses – must be pure neutron stars with no quark core. However, Vuorinen's group conclude almost the opposite: that the biggest quark stars can be larger than neutron stars, perhaps up to 2.5 solar masses. In other words, as Vuorinen points out, the detection of a compact star with a mass near that limit would be a "strong indication" of a quark star 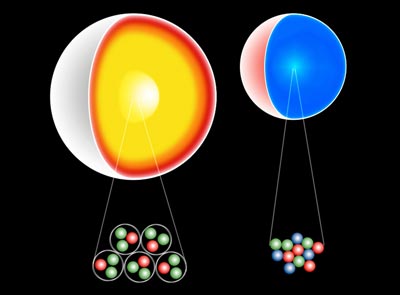 Not the answer you're looking for? Browse other questions tagged quarks neutrons protons neutron-stars gluons or ask your own question.

0
Could quark star becomes a neutron star?
9
What allows the modified Urca process to work at lower density than direct Urca in neutron star cooling?