First integral of the Kepler problem

Consider the motions of a bounded particle which is under the influence of the gravitional interaction of a second particle fixed at the origin $$ \ddot q = -\nabla V(q) $$ where $V(q) = - \frac{\mu}{|q|}$.

Is it common to define $C$ and $e$ where the potential $V$ may contains for instance higher terms in the potential (like the J2 term for the Earth) ?

Would it be the usual way to define orbital elements for this Kepler problem with higher order terms ?

Yes, it does make sense to define orbital elements even for potentials with higher order terms of $q$, which I'll rename into $r$ since it's more common in these types of problems. 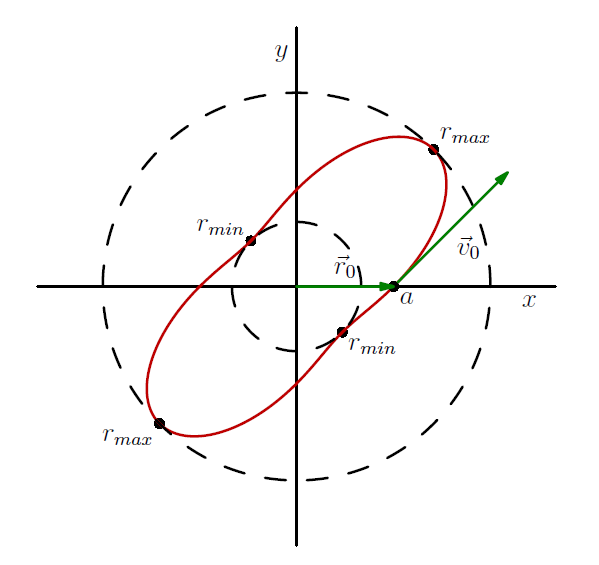 On the image you may see the initial position and velocity $\vec{r}_0$ and $\vec{v}_0$ respectively, as well as $r_{min}$ and $r_{max}$ which correspond to perihelions and aphelions.

As for defining angular momentum and the Laplace-Runge-Lenz vector (which you call $\vec{e}$), since the potential has rotational symmetry (in other words, the force is central), angular momentum is conserved (proof of which I may include if you want), so you may calculate it from initial conditions:

The L-R-L vector is a conserved quantity in the Kepler problem, but in other ones it's usually not conserved, and has a time evolution which can be obtained perturbatively. You may find more information here.

With more higher-order terms the integrals of motion usually become very hard or unsolvable, but even in the case where we resort to numerical calculations, a lot of information can be obtained from those two vectors.

Not the answer you're looking for? Browse other questions tagged gravity newtonian-gravity orbital-motion potential or ask your own question.